The Chargers lost to the Saints, but Justin Herbert showed L.A. won the future 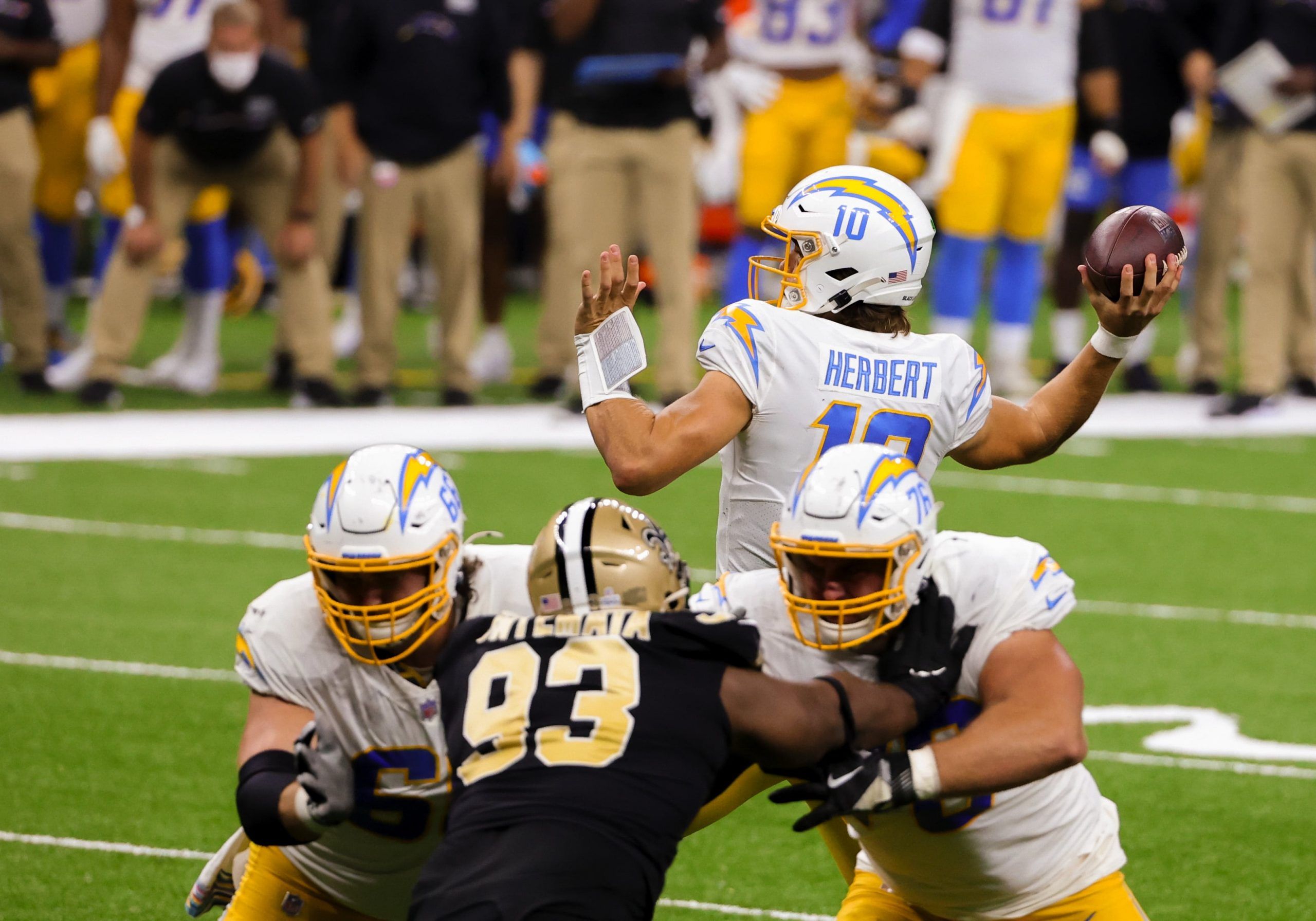 There are no moral victories in the NFL. Full stop. The Los Angeles Chargers blew a massive lead (stop us if you’ve heard this one before) on Monday Night Football, falling to the New Orleans Saints in overtime. It was a devastating gut-punch, and they now sit at 1-4. But Justin Herbert was excellent for the fourth start in a row, and that’s the most important thing.

The rookie lit it up once again, throwing for four touchdowns and only losing because of his teammates’ incompetence. He’s undeniably the quarterback of the future, and looks like he’s going to be a star for many years to come. He has easily outshined Joe Burrow, and this Chargers team is set up very well for next year and beyond.

They still aren’t even out of it this season, as the schedule softens considerably coming up after their bye week. But no matter what, they won the night long-term.

This team is much better than its record

The Chargers might be 1-4, but they very easily could be 5-0. They lost to the Chiefs in overtime on a 58-yard field goal, lost to the Panthers after Austin Ekeler dropped a walk-in touchdown off a lateral as time ran out, lost to the Buccaneers on the road after blowing a 17-point lead, and now had this debacle.

This team is loaded with talent, and Herbert has unlocked a new dimension in this offense. He’s averaging a ridiculous 8.5 yards per attempt through his first four starts, and has a 3:1 touchdown to interception ratio. He’s also athletic with some scrambling skills, and his ability to extend plays with his legs is something Philip Rivers never provided.

The Chargers are also very much alive in the playoff race despite being 1-4. Their next five games are against the Jaguars, Broncos, Raiders, Dolphins, and Jets. It’s an extremely soft schedule coming up, and there are reasons to believe they’ll only get better down the stretch.

Did the Dolphins make a mistake not taking Herbert?

ELITE PLAY BY THE ROOKIE 💣

They’re going to get a lot healthier

Besides Herbert, the main story of this Chargers team right now is all the injuries. Unfortunately Derwin James is done for the year, but they have plenty of reinforcements coming who only have short-term health issues. Elite corner Chris Harris and Pro Bowl defensive end Melvin Ingram will both be back soon, as will star running back Austin Ekeler.

The offensive line, which is currently playing without three starters, will also get a lot better soon. Pro Bowl right guard Trai Turner and right tackle Bryan Bulaga are both dealing with short-term ailments and should be healthy any week now. Even Keenan Allen had to leave the loss to the Saints early on with back spasms, which shouldn’t sideline him long.

The Chargers fortunately have a bye in Week 6, which will give them much-needed time to heal up. All-Pro pass-rusher Joey Bosa has been playing through it, but he’s severely banged up and needs the rest. If the Chargers can compete with the league’s best teams with a squad of half backups, imagine what they can do at full strength against the weaker competition coming up.

Sorry Daniel Jones, but you are no longer Danny Dimes

The Chargers still have a lot to be optimistic about this season. Even if they can’t mount a charge against the soft schedule on the horizon, they should still be thrilled that they appear to have hit a home run when they took Herbert sixth overall, and what it means for 2021 and beyond. He’s been outplaying elite quarterbacks on a nearly weekly basis, and the franchise couldn’t have asked for anything more to put them in prime position for the next decade-plus.