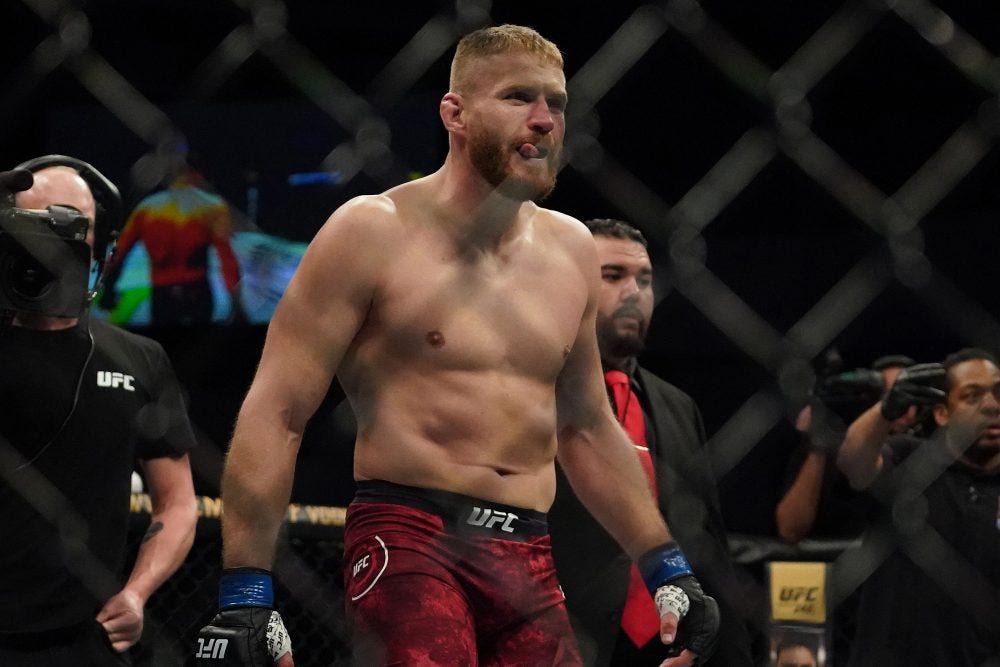 The UFC brings two title fights to Abu Dhabi this Saturday, with a special show time of 10:30am Eastern Time, five hours sooner than most pay per views. From the return of Khamzat Chimaev and back-to-back title fights in the main and co-main events, this card is fully stacked with no fights worth missing. Jan Blachowicz will look to defend his light-heavyweight belt against number-one contender Glover Teixeira, and Petr Yan will fight for interim gold against number-three contender Cory Sandhagen. You won’t want to miss UFC 267.

With 15 scheduled fights to get excited for, here are my best bets across the card, exclusive to Pickswise.

The sport of martial arts, especially at the highest level, almost always comes down to activity. Shamil has not fought in two years, and his last performance was not exactly impressive. Although he won by split decision, the undefeated fighter was expected to put on a performance of a lifetime in his UFC debut.

Taking two years off since that performance does not favor him in the slightest against Oleksiejczuk, who at only 26 years old already has six UFC fights under his belt, three in the same year. Even as the underdog on Saturday, Oleksiejczuk should have the edge in tenacity and output, securing him a decision victory and his second UFC win of 2021.

Over 15 minutes of warfare, there are few (if any) in the heavyweight division who can beat Alexander Volkov. He is a master score keeper who picks his opponents apart with arguably one of the crispest kickboxing arsenals in the UFC. If you’re going to beat Volkov, you’re going to need the highest punching power in the division, as Blaydes took him down 14 times and still couldn’t find a way to finish him.

Volkov has not let anyone take him down since the Blaydes match, and I don’t see Tybura being technical enough or having the cardio over 15 minutes to win by decision. Volkov should find himself on the winning end of a hard-fought decision, and right back into title shot contention. Even at a -305 price, I think it’s worth a play.

I believe Petr Yan is good enough to the point where this may be the most affordable price you’ll ever find for him moving forward. Every time he has been doubted, he’s won in spectacular fashion. If you look past his DQ loss in his last title fight (which he was dominating), he would be on an 11-fight win streak right now. The scariest part about Yan is that he seemingly gets better as the fight goes on, even leading into the championship rounds where he secured a fifth-round TKO victory against arguably the most highly regarded featherweight of all time – Jose Aldo. After losing his title to Sterling via DQ, I could only imagine the chip on the shoulder of the already-angry Yan.

That’s why we should expect to see a full display of Yan’s toolbox this Saturday night. He will look to expose Sandhagen on every level to prove that Sterling holding the belt doesn’t mean he’s the best.  On Saturday, Sandhagen may feel confident if he wins the first round on the feet, but Yan will slowly start to take over as the clock winds down. A Yan clinch any time Sandhagen stays the least bit stagnant could lead to a takedown or an elbow to the temple off the break. I predict that Sandhagen will find himself overwhelmed and outclassed in every department by the time round 4 comes along, and Yan will hold gold once again.

I would suggest that Jan Blachowicz may be the most underrated champion on the UFC roster, but Vegas oddsmakers are finally giving him the credit he deserves by making him a strong betting favorite for the first time since he’s touched gold. When speaking about Blachowicz, it’s nearly impossible to find a flaw in his game, as he’s only been taken down twice in his last ten fights, and in those he’s only lost once – to Thiago Santos at his prime. In Blachowicz’s last bout, current middleweight champ Israel Adesanya – who may very well be the best striker the UFC has ever seen – went up in weight looking to become a double-champ by claiming victory over Blachowicz at 205 pounds.

That fight was extremely important to UFC fans and Vegas oddsmakers alike, as Blachowicz displayed his ability to overcome adversity on multiple occasions and proved that he is more than just a one-punch knockout artist. He took Adesanya down three times and earned himself a remarkable 7:06 of control time over the helpless middleweight champion who couldn’t find a way to stop any of the advances.

At UFC 267, Blachowicz will remind us once again how much adversity he can overcome, and he will look to win in devastating fashion to cement himself as one of the greatest light-heavyweights the UFC has ever seen. Even at -300 (bet $300 to win $100), it’s a top pick on my card.