Back to the Futures: Oddsmakers react to NFL Week 4, MLB Postseason analysis 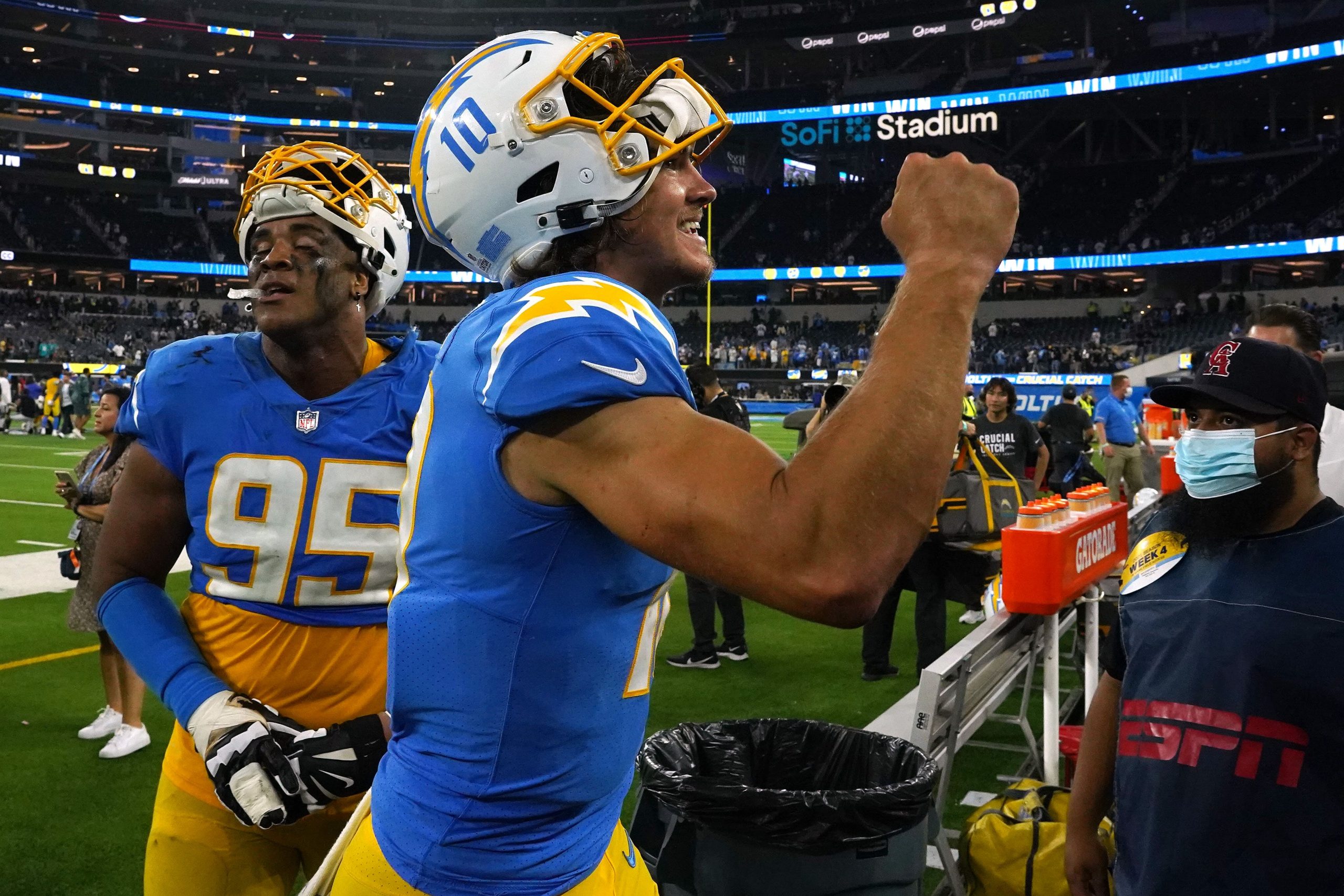 Week 4 in the NFL was a highly profitable one for sportsbooks as teams getting over 60% of the handle went just 2-4 ATS. The Bucs’ non-cover against the Patriots was the biggest win overall while the Titans, Saints and Rams all losing outright also likely ruined many ML parlays and teasers.

“In particular, Kansas City got back on track,” said PointsBet Head of Trading Jay Croucher. “A reminder to the public and to the market of what Patrick Mahomes can do and that he is still the best.”

Monday night shook things up a bit out west as the Chargers vaulted into first place with an impressive win over the Raiders. There’s still a lot to be decided in the division as the Chiefs remain slight odds-on favorites at most sportsbooks. However, Los Angeles is starting to make serious noise in some of the individual award markets. Justin Herbert is now the fourth favorite on the board to win MVP at MGM, moving from +2200 before the season began to +800 currently. Meanwhile, Brandon Staley is now the favorite at most sportsbooks to win Coach of the Year. “We’re very high on the Chargers,” said Croucher. “Particularly the past week, that created separation in the market between them and the Raiders and also the Broncos.” I added Staley to my win Coach of the Year on Monday night. The best price I could find was +800 at DraftKings.

The Cards’ dominating win over the Rams on Sunday had ripple effects across multiple markets. Arizona is now the favorite to win the NFC West at FanDuel, jumping from +350 to +170. Their odds to win the conference also got cut by more than half at the Westgate SuperBook, from +1500 to +700. “They’re definitely a team you need to respect going forward,” said TwinSpires Trading Analyst Zachary Lucas. Kyler Murray is also the favorite to win MVP at most sportsbooks.

For the Rams, the run defense is the big concern, which is surprising considering the talent on that side of the ball. However, oddsmakers are not panicking after Sunday’s result. “I still think when the dust settles we’ll see the Rams at the top of this division,” said Lucas. FanDuel kept the Rams’ odds to win the NFC relatively stagnant, dropping slightly from +500 to +550. Neither Arizona nor Los Angeles is presenting much value to me this week, especially with each team scheduled to play another divisional opponent. The NFC West is truly a gauntlet.

Check out Jared’s best early bets for NFL Week 5 and all the opening lines in his Early Birds column!

The Cowboys also went from -185 to -220 to win the NFC East at FanDuel and Dak Prescott solidified his position as the favorite to win Comeback Player of the Year, moving from +135 to -165 at MGM after their impressive win over Carolina. Dallas has also jumped to +1900 to win the Super Bowl at FanDuel. Considering they were priced at +3000 before Week 1, it’s hard to imagine there is much more room to the upside until a Week 11 showdown against the Chiefs at Arrowhead.

On the other side, oddsmakers got a better idea of just how good Carolina is. “I believe the Cowboys are better than expected, but I think the Panthers are also extremely overrated,” said WynnBet Trader Sawyer Johnson. “Last week’s win for Carolina wasn’t that significant to me.” The Panthers dropped from +2500 to +4000 to win the conference at the Westgate SuperBook.

If there’s a buy-low spot to consider in the NFL futures market this week, this might be it. The Saints blew a 21-10 lead in the 4th quarter against the Giants and then didn’t touch the ball in overtime. Despite the setback, New Orleans still has a top-notch defense and they’re a slight favorite on the road against Washington this week. After that, New Orleans will have an early bye week, which will buy Sean Payton some time to figure out how he’s handling the quarterback situation long-term. We saw Taysom Hill share a lot of the reps with Jameis Winston on Sunday, including the majority of snaps in the redzone.  “I still see a ton of upside in the Saints,” said Johnson. “They have a very good team, and we shouldn’t forget what they did to the Packers and Patriots on the road.”

Both the Yankees and Red Sox find themselves near the bottom of the World Series market priced, at +1200 and +1600 respectively at FanDuel. Whichever team wins the AL Wild Card game Tuesday at Fenway Park will present some intriguing value as an underdog on the series line against the Tampa Bay Rays, who both teams are very familiar with.

In the National League, keep an eye on the Brewers, who are currently +900 to win the World Series at FanDuel. I bought in on Milwaukee at +1200 back on August 1st and despite the self-inflicted wound caused by star reliever Devin Williams breaking his hand during the division title celebration, I still think the rotation is good enough to make a deep run. If you don’t have a current position on the Brewers yet, it might make more sense just to bet them to win each series individually and progressively roll over the profits, as I expect them to be an underdog in the NLCS and beyond. “At this point, the value is in the series prices,” said Johnson. “You should wait for a book to make an over adjustment after the playoffs start.” Milwaukee is currently -145 to beat the Braves in the NLDS at the Westgate SuperBook.

Make sure you read Andrew Ortenberg’s best bets for the MLB Playoffs!