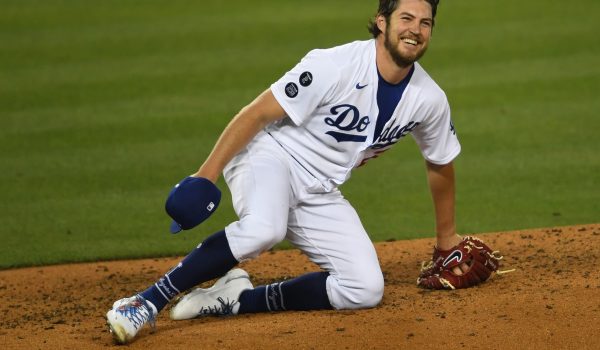 Welcome to the MLB April 29th slate! With plenty of action across the board, I’m picking out two spots that are almost complete opposites: one where I expect a pitcher to absolutely dominate, and one where I believe he will exceed the general consensus that failure is likely. Let’s dig in.

Normally, I tend to stay away from strikeout props that are this high – as they tend to not leave a ton of margin for error – but this is a trademark Trevor Bauer slam spot. He excelled vs teams in the bottom-half of the MLB in K% in 2020, including his three outings vs Milwaukee, where he racked up 12, 8, and 12 strikeouts. Combine that with no Christian Yelich and no DH, and there are several more K’s on his radar. As much as any pitcher in baseball, Bauer loves the strikeout. He has a K% of 37.8% so far this season, the highest of his entire career, and is showing no signs of regression from last season.

As mentioned, the Brewers are a club that racks up the K’s. They ranked 3rd-worst in baseball in 2020 and 4th-worst in baseball thus far in 2021, and I just don’t see any reason to believe these numbers are going to improve. There’s essentially zero spots in the lineup that are consistent ‘in-play’ guys, especially in the early going with several hitters including Keston Hiura in massive slumps. LA has played some very, very long baseball games over the last week, so this is the quintessential ride your ace occasion. I also like Bauer over 18.5 outs, but prefer 8.5 strikeouts, as I could see him easily mowing down 10 hitters in 6 innings pitched.

This is a risky play, but I believe we might be catching Mize at a time where he is getting a slightly better than advertised matchup and is also set up for positive regression. Mize has a rather unappealing 5.23 ERA for the season, but a few metrics suggest he may be on the right track to improvement. He’s surpassed 14.5 outs in 2 of 3 outings, and there’s reason to believe this mark will be on the extreme low end by the end of the season. Mize has thrown at least 85 pitches in three of his four outings – the exception being opening day – and is likely to get around 90 today. If he can’t exceed 14.5 with 90 pitches, it’ll have to because he gets absolutely shelled, and I find that a bit unlikely given a season-long 4.70 xFIP that while isn’t good is also nowhere near representative of the potential he has a former lottery pick.

Mize also will see a Chicago White Sox lineup missing two solid bats – Yasmani Grandal and Luis Robert – which should open up a bit of space for Mize to navigate through. There is no doubt that they are still a tremendous team, but when you have a total as low as 14.5, it really doesn’t take too many breaks to hit the mark. Chicago is also just a touch inferior vs RHP as opposed to LHP, so their reputation for knocking pitchers out early could very realistically be postponed a day. This is not a slam spot, but I do believe there’s exploitable value here and even if Mize struggles, I expect him to firmly surpass 14.5 outs.