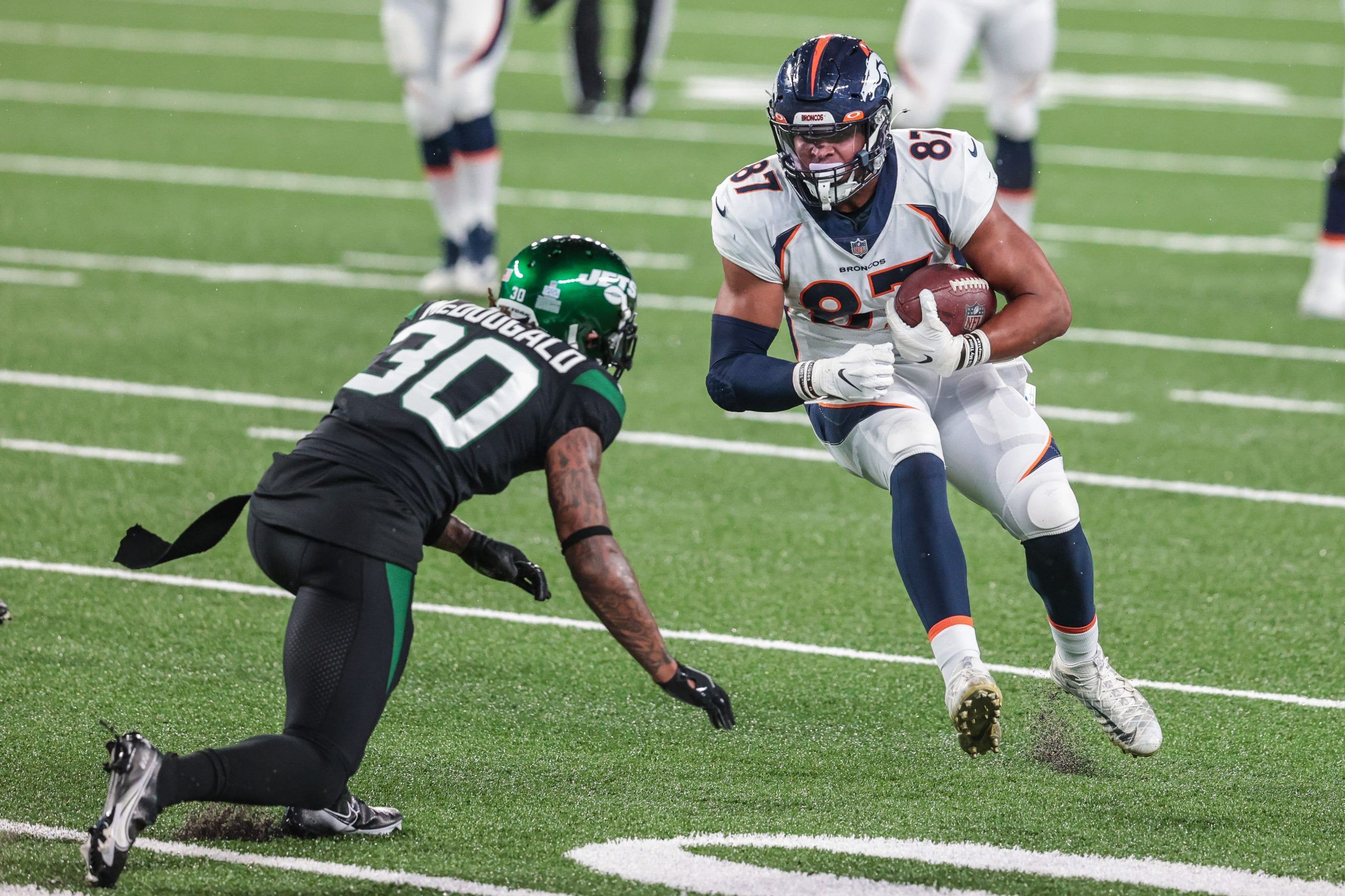 Week 15 trudges on, treating us to two Saturday matchups.  The first game sees the AFC East leading Buffalo Bills heading to Devnver to face the Broncos.  For the nightcap, the current number one seed in the NFC, Green Bay Packers, look to solidify their standing, at home versus the Carolina Panthers.  Both games forecast to be cold, but clear – perfect conditions for December football.

Adding a day of games onto the weekly NFL calendar is a bettor’s dream.  Be sure to ready yourself by checking out our picks and full game previews here.  As for player props, these games provided some interesting individual matchups.  I found some value in two pass catchers, both primed to have big days.

Line available as of publishing. Playable up to 38.5 receiving yards.

Yes, I’m targeting the Bills defense again with a tight end’s yardage prop.  It didn’t work out last week with Eric Ebron, but I see too much value on this Noah Fant line.  Fant left last week’s game early in the first quarter with a mysterious illness (assumed by beat writers to be food posioning), but has practiced in full this week and should be good to go.  The sophomore tight end has developed a nice rapport with his draft class counterpart, quarterback Drew Lock.  In Lock’s games this year (excluding last week), Fant has exceeded this number in six of seven.  Fant’s target share is 16%, and his yard share is a robust 20%.  Only once did Fant fail to see less than five targets.

Despite limiting Ebron (and the entire Steelers offense) last week, the Bills remain a plus matchup for opposing tight ends.  The Broncos receivers have tough matchups with the Bills robust secondary, and both of Denver’s running backs, Melvin Gordon and Philip Lindsay, are questionable to play.  The Bills still allow opposing tight ends 64 yards per game, second most in the NFL.  It’s also worth noting that Fant leads the NFL amongst tight ends with 6.8 yards after the catch per reception.  With the Bills missing the fourth most tackles in the league with 111, I see the Broncos taking advantage by throwing a few more short passes Fant’s way.

With Lock implied by bookmakers at 35 pass attempts and around 240 yards, this puts Fant at 5.6 targets and 48 yards.  Given the matchup, I project Fant at six targets, and his yards in the low 50s.

Line available as of publishing. Playable up to 40.5 receiving yards

Another receiving prop, and for this one, I’m keying in a Packers receiver, just not the one you’d expect.  MVS has had a turbulent year, but he’s carved out his role as the deep threat in an offense lead by MVP candidate, Aaron Rodgers.  He’s hit this number in seven of twelve, including four of the last five.  However, his misses have been bad, with three games of five, zero and zero yards.  More importantly, the opportunity is there.  Even with the return of fellow receiver Allen Lazard, Valdes-Scantling has played in at least 70% of offensive snaps each game.

Valdes-Scantling’s average depth of target (aDOT) is 17.6, and his average depth of catch is 13.2 yards, both pace the Packers receiving core by at least four yards each.  Nine of MVS’ 31 receptions this season have gone for 20+ yards, and five of those have gone for over 40 yards.  In the last five games alone, he’s averging 22.8 yards per reception, and 14.25 yards per target – both would currently lead the NFL.

When looking at such a high variance player, the matchup becomes even more vital.  The Panthers have allowed the sixth most receptions of 20+ yards, with 44.  In the last seven games, they’ev allowed sixteen different receivers to hit this number.  With Adams commanding safety help over the top, Valedes-Scantlins should have plenty of room to run one-on-one versus the Panthers subpar secondary.

This is the case of a player potentially only needing one long catch to hit this prop.  Though, with Valdes-Scantling seeing six targets in three of his last four games, the volume has been there for him as well.  I have him projected in the mid 50s, with one long catch carrying the weight.