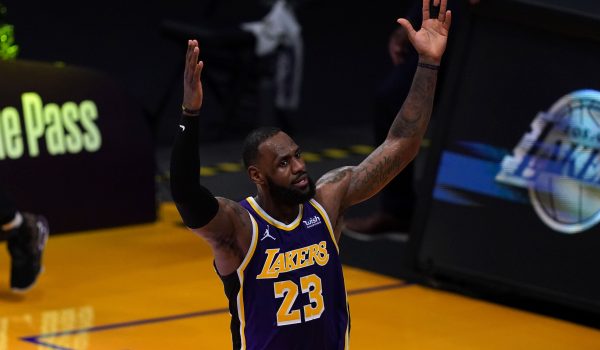 March Madness is in full swing, and we’ve also got some nice NBA and NHL action on Saturday. There are a lot of big games, which always attracts some big public sides. Will bettors be lucky this time around? Let’s take a look at where the public money is going as bettors once again try to beat the books.

College basketball is getting most of the attention right now, but this NBA spot is shaping up as the biggest public side of the day. 87 percent of the bets and a whopping 91 percent of the money are laying the points with the Lakers here, per DraftKings’ internal numbers shared with us. Los Angeles still doesn’t have Anthony Davis, but bettors see a spread this short against a team like the Hawks and don’t have to hear anything more.

The Hawks aren’t at full strength either, and are missing a couple of key players on the wing. Los Angeles is also 4-0-1 ATS in their last five games, so there’s no reason to believe they can’t play without Davis. We’ve got to roll with the Lakers as well in this spot.

Pivoting to March Madness now. Know what else the public loves? A 12 seed underdog. Everybody saw Oregon State pull off the outright upset by knocking off Tennessee in dominant fashion on Friday, and they’re looking to go back to the well with UCSB over Creighton. 74 percent of the bets and 73 percent of the money are on the Gauchos to cover this spread.

The last time bettors saw Creighton play, they were getting smoked by 25 by Georgetown in the Big East Tournament. They’ve now scored less than 60 points in back to back games, while UCSB has won 18 of their last 19. The Gauchos aren’t your typical Big West team, and they’ve got a lot of high major talent that has transferred into the program. We like them here as well. In fact, they’re one of our ‘March Madness best bets‘ for today.

Switching things up with a total now, the public likes the over in this #7/#10 matchup here in the East region. They might just see a total this low and think the over naturally makes some sense. 75 percent of the bets and 66 percent of the money are on the over 129.5 here. The under went 9-7 on the Friday slate, and that was even with a couple brutal beats sending games over.

Still, the public is never going to rally behind an under. Maryland and UConn both play at very slow paces, so they’re going to need to be efficient in their shot-making if they want to send this one over. The under is also 5-1 in Maryland’s last six games, so we’re fading the public here and going under.

Easily the heaviest public side of Saturday’s NCAA Tournament slate is Ohio here in the West region. Bettors saw one #13/#4 upset yesterday with North Texas over Purdue, why not go for another one? There’s often a lot of hype (understandably so) around MAC teams in the NCAA Tournament. 76 percent of the bets and a whopping 87 percent of the money are on the Bobcats and the points in this one.

The buzz around Jason Preston has been palpable, so it’s not surprising they’ve turned into a trendy underdog. The public also probably still views Virginia as susceptible to an upset (again understandably), due to the very slow pace that they play at. We can’t say we disagree with them on this one.

Looking at the hockey board now, the public is gravitating toward the Coyotes on Saturday. 84 percent of the bets and 77 percent of the money are on Arizona on the money line in this spot. This one is fascinating, since the Coyotes are currently riding a five-game losing streak, so they don’t profile as your typical public side.

As such, this is probably more of a fade of the Ducks than anything else. Anaheim has lost four of their last five, and goalie John Gibson has been on a steep decline recently. We like Arizona as well at a reduced price, and it’s one of our ‘NHL best bets‘ on Saturday.