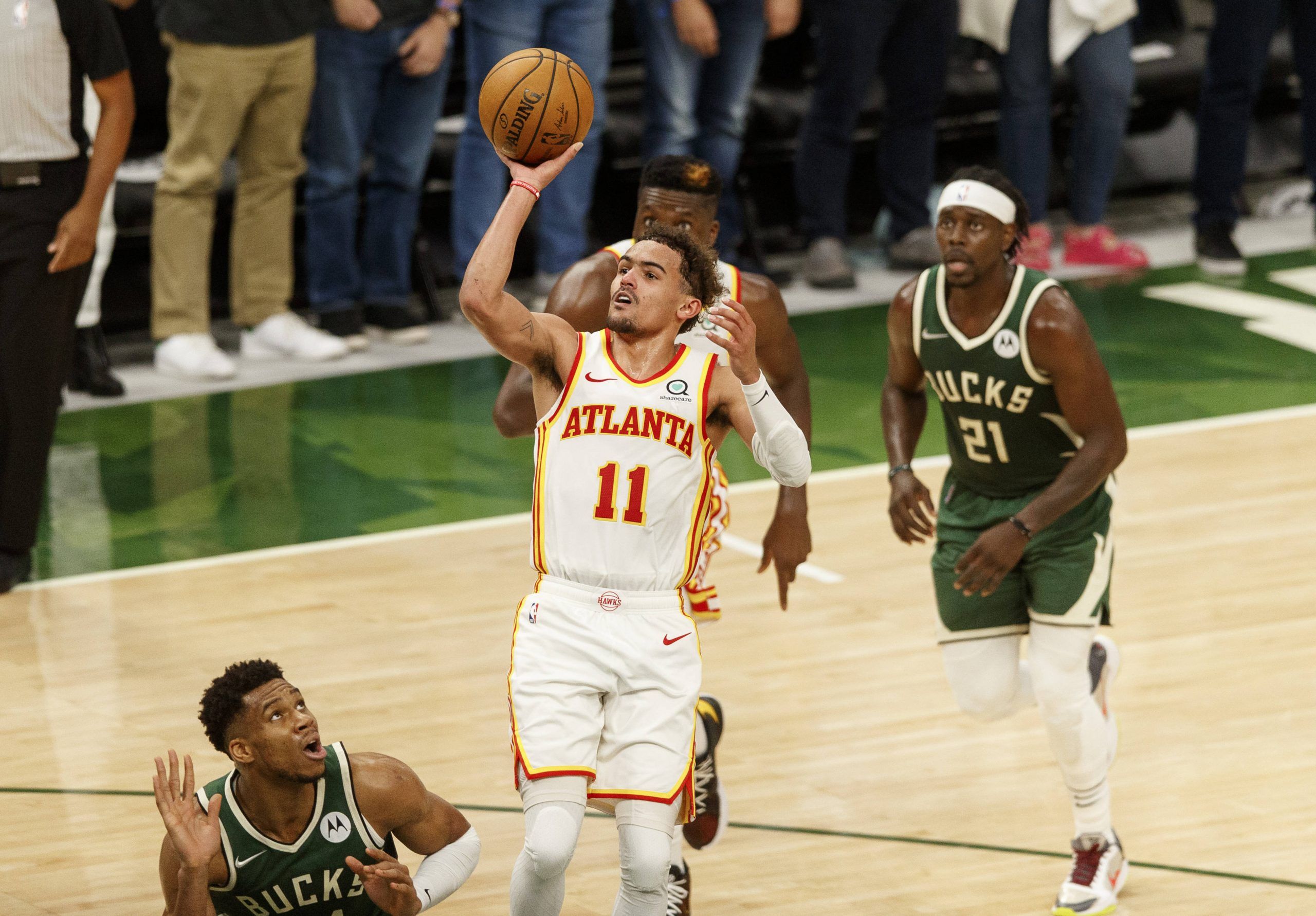 Since graduating from Davidson (The College That Stephen Curry Built), I have been writing about sports--just about any and all you can think of!--and coaching tennis in Atlanta, Ga. Beyond the four major sports, I am an avid tennis fan and cover the ATP Tour on a daily basis. If I'm not busy writing, you can generally find me on a tennis court or traveling the world wherever a sporting event takes me.
@Dimonator133
Updated: 6:18 AM ET June 24, 2021

Don’t look now, but the Atlanta Hawks — yes, the Atlanta Hawks — have a 1-0 lead in the Eastern Conference Finals and are three wins away from playing for the NBA championship. After getting past higher-seeded opponents in the first two rounds (No. 4 New York and No. 1 Philadelphia), the Hawks took Game 1 against the Milwaukee Bucks 116-113 on the road on Wednesday night.

Trae Young rebounded from a rough shooting performance in Game 7 at Philadelphia on Sunday to explode for 48 points on a 17-for-34 effort from the floor to go along with 11 assists, seven rebounds, and whole bunch of huge free-throws down the stretch.

Each team has both reasons to be encouraged and also causes for concern heading into Game 2 and beyond. Let’s break down what happened in the opener and what it could mean for the rest of the series.

Can the Hawks actually do this?

The Hawks got seven points (and it moved up to +8 at some sportsbooks) in Game 1, which we correctly predicted would be more than enough. They were also +360 to win the series prior to Wednesday’s tipoff, which was also too much. The disrespect can be explained simply because they are… well… the Hawks, but it was already time to put some respect on their name even before Game 1. Now it’s past time.

Young has activated superstar status as he comes down the stretch of his third year in the league. You don’t have to argue that Atlanta won the Young-Luka Doncic trade with Dallas, but you can no longer call it a loss. The Hawks have their superstar, and with a supporting cast that includes John Collins, Clint Capela, Bogdan Bogdanovic, and Game 7 vs. Philly hero Kevin Huerter, they cannot be discounted.

TRAE YOUNG IS SO DISRESPECTFUL 💀

He hits the shimmy before taking a 3 pic.twitter.com/kZHiUOTTnq

The subject of Bogdanovic, however, is not good. Due to a knee issue, the former Sacramento sharpshooter was a shadow of his real self in Game 7 against the Sixers and he was the same on Wednesday. If Bogdanovic continues to be liability on both ends of the floor, head coach Nate McMillman has to get him out of there. But the Hawks are already down De’Andre Hunter and Cam Reddish, which makes this even more of a problem.

At the same time, the fact that Atlanta won on the road even with Bogdanovic being a virtual no-show is extremely encouraging.

There is some silver lining for Bucks

Similarly, the Bucks got almost nothing — at least until the last few minutes — from Khris Middleton. Their second-best player went 0-for-9 from three-point range and they still had victory in their grasp with a four-point lead late in the fourth quarter. Even a mediocre showing from Middleton would have been enough for Milwaukee to win, and may be enough for the East’s No. 3 seed to get the job done the rest of the way. There was also a stretch early in the fourth quarter in which the Bucks were getting any shot they wanted around the basket (mostly lay-ups or dunks for Giannis Antetokounmpo) as opposed to settling for outside shots by Middleton.

Of course, the Hawks enjoyed basically the exact same stretch in the third quarter when Young was either draining easy floaters or handing out alley-oops to Collins and Capela. Both teams got away from that down the stretch. Whichever one gets back to that kind of offense could end up punching a ticket to the NBA Finals.

It must also be noted that Antetokounmpo went 6-for-8 from the free-throw line and sank two clutch ones in the final seconds to keep his team within striking distance. Antetokounmpo is going to find his way to the charity stripe more than eight times in most games, and if he continues to shoot at least 75 percent from the line Milwaukee is probably going to win this series. The Hawks upset Philadelphia largely because Ben Simmons couldn’t make free throws and then the rest of his game deteriorated. They won’t receive the same kind of generosity from the Greek Freak.

But the Hawks also may not need it. It’s time to accept the fact that Young is a superstar and this team is the real deal. Even if Milwaukee starts playing better than it did in Game 1, Atlanta has a legitimate chance.

Be sure to read our full game preview for Game 3 of Phoenix Suns vs. Los Angeles Clippers