Justin Herbert or Joe Burrow: Who looks the better prospect? Our writers have their say on the big debate 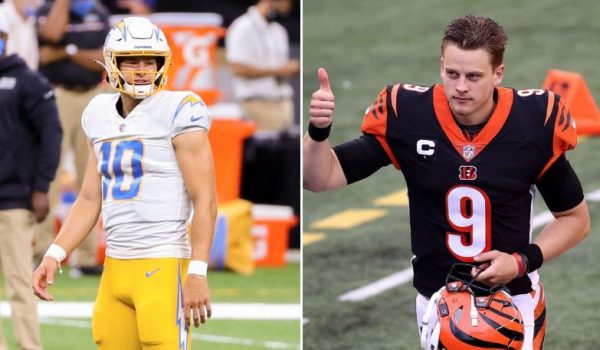 We are not yet halfway through the 2020 NFL season, and already rookie quarterbacks Joe Burrow and Justin Herbert have received plaudits from many for their performances so far. Rightfully so.

Burrow has thrown for 2,023 yards–the third most in the league–and nine touchdown passes. He has also ran in two scores himself in his last two games. Herbert, meanwhile, has been lighting it up since taking the reins from Tyrod Taylor. He has posted 8.4 passing yards per attempt–tied for third in the NFL–and 12 touchdowns.

Neither of their teams have a particularly great record, with Burrow and Cincinnati at 1-5-1 while Herbert comes in at 2-4 with the Chargers (only one of those victories has come with him under center). But the general view is that these two quarterbacks have very promising futures based on what they’ve shown so far.

The question everyone is now asking is which of them is better? And who is likely to have a more prosperous NFL career? Three of our Pickswise NFL writers weigh in on the big debate.

For me, it’s Joe Burrow.

The LSU product has been fantastic since day one and has posted more than 300 passing yards in five of his last six games. He also threw for 406 yards and three touchdowns against Cleveland on Sunday.

He looks comfortable in every situation, makes good decisions, and most importantly he’s shown short memory. What I mean by that is he doesn’t let his mistakes bother him. There are a couple of occasions when he’s made an error and could have started second-guessing himself. But I haven’t seen that from Burrow, and that is crucial to the development of a top quarterback.

Joe Burrow says, sorry Baker now I HAVE THE LEAD 💰#SeizeTheDEY +3.5 right back on top!

There is no doubt he has made the Bengals a lot better than they were last season, regardless of what their record is. I don’t think the same can be said for Herbert.

I wasn’t that big on the former Duck going into the draft, so maybe I’m still holding some bias. But given the weapons L.A. has on offense, such as Keenan Allen, Mike Williams, and Hunter Henry, I would’ve been surprised if he had not hit the ground running.

One of the questions surrounding Herbert entering the draft was his ability to throw it deep. Around half of his passes last year at Oregon were within five yards of the line of scrimmage. Although he did show some signs of hitting that sweet spot downfield against Jacksonville, it’s still an area that needs to be improved–especially if he’s to use Williams to the best of his ability.

Both Burrow and Herbert have looked great so far, but to me Burrow just looks the more complete quarterback right now. Once he gets some better weapons around him on offense, he’ll really start to make his presence felt in the NFL.
Andrew Wilsher

Herbert all the way

I’ve got to disagree, and I’m rolling with Herbie here. That’s not meant as a knock on Burrow, as I’ve been quite impressed with the LSU product as well.

But Herbert has been better, for a few reasons. For starters, Burrow was the unquestioned starter all offseason. He got all of the first-team reps in camp leading up to his debut, and had a lot more time with his first-string offense than Herbert did. Herbert on the other hand was the backup to Taylor the entire time, and his first extensive reps with the first-team were when he was suddenly thrust into the starting role in Week 2.

Herbert had a lot less time to prepare than Burrow did, which is what makes his hot start even more noteworthy. While Burrow’s offensive line has been patchwork, it’s not like Herbert has had great blocking up front either. He has only had starting right tackle Bryan Bulaga for a half of one game, and Pro Bowl guard Trai Turner has been out there for only one of his starts.

He’s been under heavy pressure as well, but has done a much better job than Burrow, who often holds the ball too long, of handling it. Plenty of the league-high 28 sacks Burrow has taken have been on him and not the offensive line.

Herbert has also excelled in many areas where rookies usually do not, including on third down. In fact, he’s leading the league in third down passer rating right now, which is incredible. That’s something you’d expect from an elite seasoned veteran, not a rookie who was thrown into the fire with very little preparation.

Herbert has been getting it done no matter who is out there, and he’s making practice squad guys like Jalen Guyton look like Pro Bowlers. Burrow has shown plenty of flashes but hasn’t been as consistent as Herbert, as the Oregon alum has been excellent in nearly every game.

Herbo has now gone back to back games with at least four total touchdowns and no interceptions, while Burrow has thrown a pick in four straight games. Herbert is averaging 8.4 yards per attempt to Burrow’s 6.9. If I had to pick one today I’m going with Herbert, and it isn’t all that close for me.
Andrew Ortenberg

Justin Herbert should be expecting a "random drug test" after this whale of a throw 😳pic.twitter.com/hQCvSg0gYf

Can you really go wrong with either one? The answer to that is most certainly no. Each of these guys has been extremely impressive, both in college and now in the NFL.

If I had to take a side, I would lead toward Burrow simply because of the sample size of success. Yes, most of that sample size is his senior year in college—when he produced arguably the best individual season (and team season, for that matter) in the history of the sport. Obviously the sledding is tougher now that he isn’t throwing the football to an array of weapons that were far superior to anything opposing defenses could offer, as was the case at LSU. Still, Burrow looks well on his way to making a once moribund franchise respectable. The Bengals have a win, a tie, and four losses by five points or fewer. They won’t admit it, but the Bengals are a team in the department of moral victories. A 1-5-1 record with four extremely competitive losses is an overall moral victory.

As for Burrow, himself, he has 12 total touchdowns (nine passing, three rushing) and five interceptions. His poise and production have been commendable while playing behind one of the worst offensive lines in the business. The 23-year-old has been sacked a ridiculous 28 times, including eight in a game by Philadelphia and seven by Baltimore.

Herbert’s numbers may be better, but he got drafted into a better situation. Nothing about this is surprising.

When the Bengals eventually surround Burrow with the necessary parts, the wins are going to come. Because that’s just what he is: a winner. Both of these rookie studs pass the eye test, but the intangibles that Burrow brings to the table give him the ever-so-slight edge for me.
Ricky Dimon

NFL 2 days ago
Who will win Super Bowl 56? Odds, breakdown and best bets: Ravens ready to reach top of the mountain