Our experts at Pickswise select their best Korean Baseball picks for Sunday to help you find the best value. Whether you’re looking for a single money line pick or a KBO parlay, we have you covered. Note that all of these games start at 1:00am ET and 4:00am ET on Sunday morning.

Here are the KBO betting odds for Sunday, September 12 courtesy of DraftKings sportsbook.

The KT Wiz will start Ko Young-Pyo, who is having a decent season, posting a record of 9-4 with an ERA of 3.50. The Landers sit in 5th place, or the final playoff spot, but hold just a 2-game advantage over the NC Dinos. They will counter with Lee Tae-Yang in the first game of the double-header. He has been below average this season, posting an ERA of 5.13 with a record of 4-6.

The starting pitching edge clearly goes to the KT Wiz, which is why they look to be worth a play here. Young-Pyo has been solid against the Landers, making the KT Wiz the play here.

Drew Rucinski has been solid against the Tigers and this is shown by his 2-0 record against them. Not only that, but his ERA of 3.00 against Kia is also good enough to believe he can slow them down. Rucinski has 2 starts against Kia, in which he has allowed 4 runs over 12.0 innings.

While Han Seung-Hyuk has also been very good this season, he has yet to face the Dinos. That could give him a small advantage, at least during the early part of the game since the Dinos’ lineup have not seen him. Both offenses are struggling for consistency this week, so backing the under will be the play here.

The Lions will start David Buchanan, who is 11-4 on the season with an ERA of 2.76. He almost always gives his team a chance to win and that should be no different here. The Eagles come into this game having lost 3 games in a row. They will counter with Yun Dae-Kyung, though he has not been as effective. His record on the year is 1-4 and he has an ERA of 4.58.

The Lions look to be the best play in this game, based on their clear advantage on the mound. Samsung is just too strong to fade in this spot, so backing them on the run line will be the play.

For those of you looking for bigger payouts, play the best bets as a 3-team parlay–which pays out at +448. 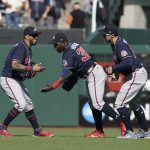