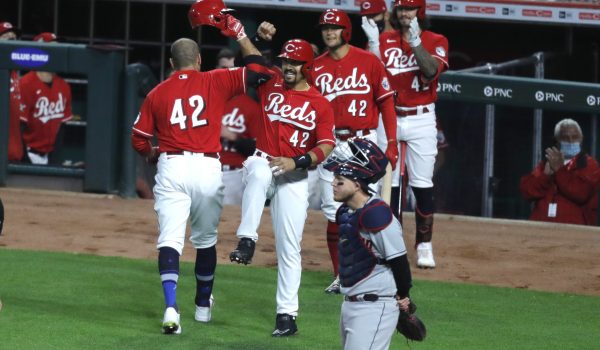 The 2021 MLB season kicked off about three months ago, and the action has been jam-packed. Why not celebrate the middle of a new week by going for a big payday on Wednesday? That’s right; we’re back with another MLB mega parlay, this time a three-teamer with a payout north of 12/1, and we’re counting on the Reds to win big.

I just cashed this MLB mega parlay last Wednesday at 12/1 odds; let’s do it again this Wednesday!

The Rangers picked up a 10-5 win over the Tigers on Tuesday, and should get another lopsided victory here. Texas’ offense is quietly starting to pick up, and they have a huge edge on the mound here. Kyle Gibson will start for the Rangers opposite Casey Mize for the Tigers. Gibson has been one of the league’s best starters this season, entering with a 1.98 ERA and 1.03 WHIP.

He’s given up more than two earned runs in a start only once since April 1st, and that was all the way back on May 4th. Over his past seven outings, he’s given up only seven total runs. At home this season his ERA is a minuscule 1.09. I don’t see how this Detroit lineup is supposed to get to him. With Gibson pitching, we’ll probably only need a few runs from the Rangers to cash this.

Be sure to check out our full game preview for Detroit Tigers vs. Texas Rangers

The Reds lost 7-6 on Tuesday, but right before that they’d won five straight. Even after picking up that one-run victory, the Royals are still just 3-11 in their last 14 games. Royals starter Brady Singer has regressed in his second season in the big leagues. His ERA is an unimpressive 4.74, but his whopping 1.52 WHIP shows he’s lucky even to have that.

He’s failed to make it out of the fourth inning in three of his past four starts, so we should see a lot of this highly mediocre Kansas City bullpen. The Reds will turn to Sonny Gray, and he’s been pretty great after a rough April. He’s given up only four total earned runs in his last four starts. The Reds should roll here.

To wrap this mega parlay up and hopefully bring us home, we’ve got the Giants on the alt run line -2.5. San Francisco is first in the league in home runs and third in run differential, so they’re the type of team to back on this kind of line. The Cardinals on the other hand are 26th in MLB in runs scored, so they’re the kind of team you want to fade on this line.

St. Louis will also start Johan Oviedo here, and the young Cuban has had a really tough start to his career. In 15 major league starts between last year and this year, his ERA is 5.25. This season he has a 1.55 WHIP, and the Cards are just 3-8 in games that he’s pitched in. After a shaky first half of June, Giants starter Alex Wood has been really solid his last couple of times out. San Francisco also has one of the best bullpens in the league.

Be sure to check out our full game preview for St. Louis Cardinals vs. San Francisco Giants