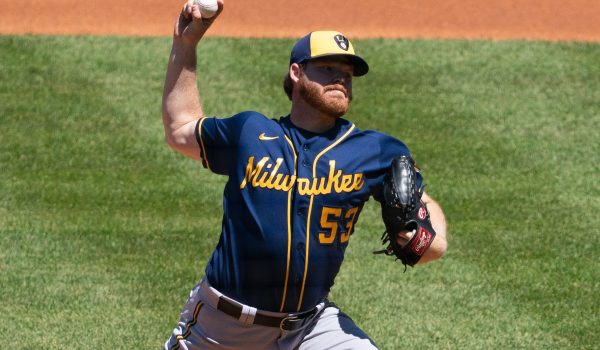 The 2021 MLB season kicked off over a month ago now, and the action has been jam-packed. Why not celebrate humpday by going for a big payday on Wednesday? That’s right, we’re back with another MLB mega parlay, this time a three-teamer with a payout north of 16/1, where we’re counting on the Brewers to pummel the Cardinals.

We just cashed our MLB mega parlay last Tuesday at +1287 odds, let’s do it again on Wednesday. We’re going big and bold, so let’s not waste any more time. We’re diving in, but don’t forget to check out our picks for the side and total on every MLB game, with our team of experts in red-hot form to start the season.

Starting this mega parlay off with some interleague action. Hyun-Jin Ryu’s 3.31 ERA might not jump off the page, but he’s still one of the best pitchers in the league. He’s had two bad starts, but in his other four starts he’s given up only four total earned runs. His ERAs the past three seasons are 2.69, 2.32, and 1.97. Current Braves hitters have a .120 batting average and .345 OPS in their careers against Ryu.

The Blue Jays have scored at least four runs in six straight games, and at least eight in three of those. Crucially, Toronto’s relievers have also been excellent. The Blue Jays are fourth in the league in bullpen ERA. On the other hand, Braves starter Max Fried has an 8.44 ERA this season. That’s even after giving up just one run in his last start.

Be sure to check out our full game preview for Toronto Blue Jays vs. Atlanta Braves.

The Brewers also have a huge edge on the mound here. Brandon Woodruff for Milwaukee going up against John Gant of the Cardinals. Gant has a 2.15 ERA, but that’s clearly fraudulent. He has a ridiculously high 1.70 WHIP, so that ERA obviously isn’t going to last. There’s a reason he’s been a bullpen guy for most of his career. Woodruff on the other hand was lights out last year, and has been even better for the Brewers in 2021.

He’s been one of the best starters in the majors, entering with a 1.73 ERA and 0.77 WHIP through seven starts. In his last six outings, he’s given up only five total runs. With Woodruff on the mound, we’ll likely only need four runs from this Brewers offense to cover the run line. Gant has walked at least five batters in three of his last four starts, which he isn’t going to keep getting away with. He’s due for some serious regression.

Be sure to check out our full game preview for St. Louis Cardinals vs. Milwaukee Brewers.

The Angels are in a funk right now, so it makes sense to keep fading them and play the Astros. Los Angeles is just 3-7 in their last ten games, and lost 5-1 to Houston on Tuesday. The Astros have won each of Jose Urquidy’s last three starts, all of them by multiple runs. In his last two outings, he’s given up only two runs and ten baserunners in 14 innings.

Houston’s offense has also been quite consistent, scoring at least four runs in six straight games. The Angels have a bullpen ERA of 4.90, so even if Andrew Heaney pitches well here they aren’t out of the woods. Jose Altuve is 10/25 (.400) with three doubles and a home run in his career against Heaney.

Be sure to check out our full game preview for Los Angeles Angels vs. Houston Astros.