HomeAnalysisNFL AnalysisMonday Night Football reaction: So much for the 49ers' comeback

Monday Night Football reaction: So much for the 49ers' comeback 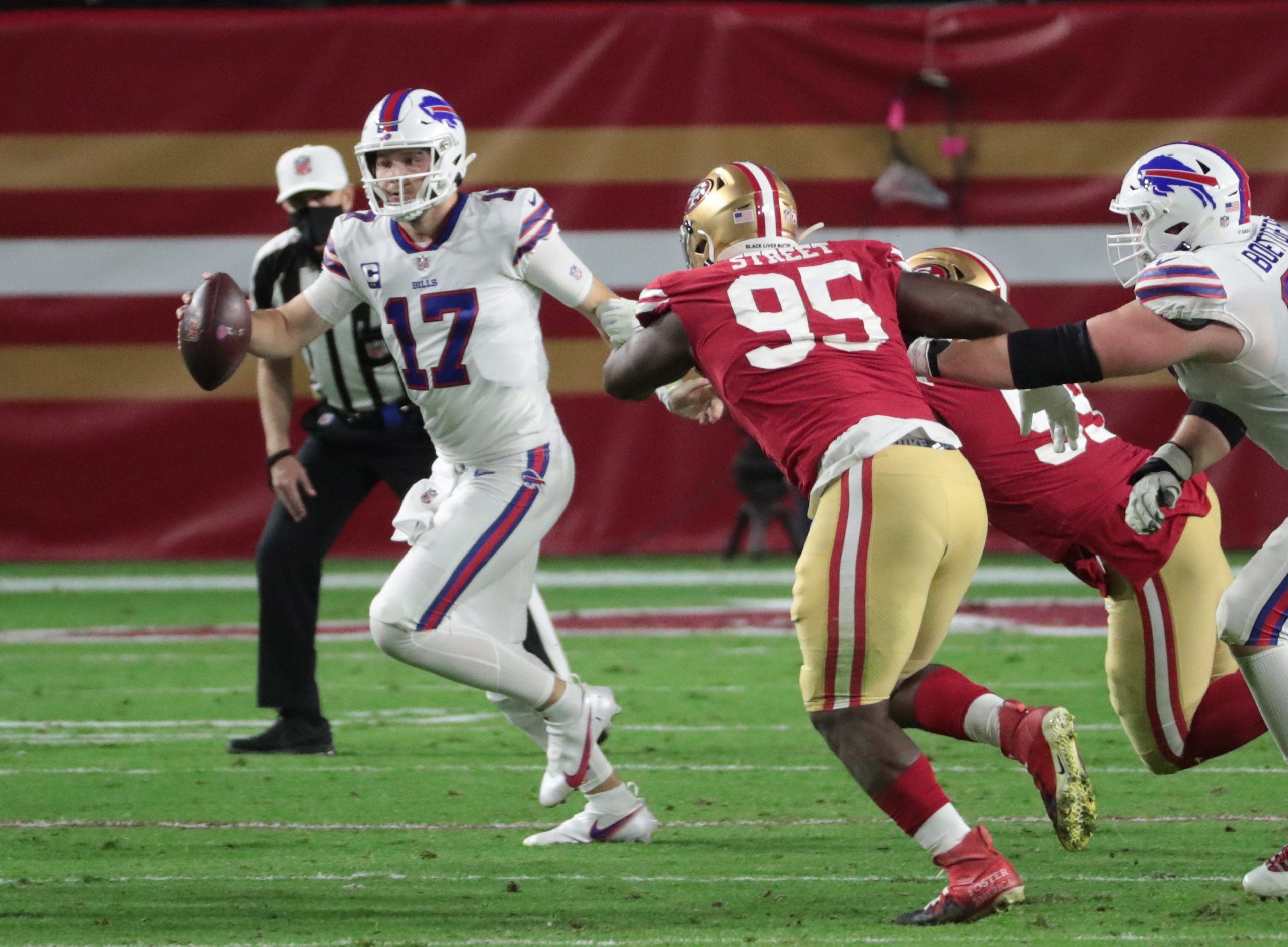 What looked like a close and exciting matchup on Monday Night Football turned out to be somewhat of a dud as the Buffalo Bills more or less dominated the San Francisco 49ers, beating them 34-24. The game wasn’t as close as that final score might indicate, as San Francisco scored a garbage time touchdown with less than a minute left. The final game of Week 13 had significant playoff implications for both conferences, and there’s a lot to digest with what we just saw.

So much for the 49ers’ comeback

The 49ers were on the receiving end of a ton of hype this week, as it looked like head coach Kyle Shanahan was on the verge of bringing his team back from the dead. The Niners upset the Rams as underdogs of more than a touchdown last week, ensuring they’d be tied for the final wild card spot in the NFC if they could beat Buffalo. A lot of people, myself included, pointed out that their three recent losses were to the Seahawks, Packers, and Saints–several of the best teams in the league. There was a sentiment that they’d gotten unlucky and could get on a roll here down the stretch.

Just about everybody thought they had a good shot to win this game, as money poured in on the 49ers all week. They opened as underdogs of nearly a field goal at +2.5, and by the time kickoff rolled around they were -2, a significant shift even if not through any key numbers. When it finally came time to play the game they fell completely flat, getting picked apart by Josh Allen.

The return of Richard Sherman last week clearly didn’t solve everything in the secondary, as Allen passed for 375 yards and four touchdowns on them. In the end, it looks like there will have been just one too many things working against the 49ers this season. All the injuries and the brutal schedule were simply too much to overcome, barring a boatload of luck in these final four weeks.

The 49ers are now toward the back of a pile-up of teams all fighting for that wild card spot, and they’ll have to win out to even have a chance. That quite possibly wouldn’t even be enough. Tough games against the Cardinals and Seahawks still await, so 49ers fans might want to start looking forward to next season and thinking about what they’re going to do with Jimmy Garoppolo.

Nick Mullens adds to the #BillsMafia +1.5 momentum with an INT

Time to hit the panic button for #FTTB?

The Bills want their respect

The Bills want their respect, and they’ve earned it. They saw how they were underdogs on a neutral field against a 5-6 team, and came out on fire. Allen silenced many of his critics who had been popping up during a recent disappointing stretch and then some. They maintained their one-game lead over the Dolphins for first place in the AFC East, greatly increasing their chances of hosting a first-round playoff game.

They have some big games coming up, with each of their next three contests being on national television. A win here was desperately needed, especially with the Steelers on deck. They’ve got to be feeling a lot better about their Sunday Night Football showdown with Pittsburgh in Week 14 now.

There are still plenty of question marks with this team, and it certainly isn’t out of the woods yet. The lack of ground game is concerning, and I’m not convinced that the Bills’ defense is suddenly back among the league’s elite following a game in which they still allowed Nick Mullens to average 8.1 yards per attempt. But it’s important not to overlook the effort here, and I certainly feel a lot better about the Bills than I did entering Monday night.