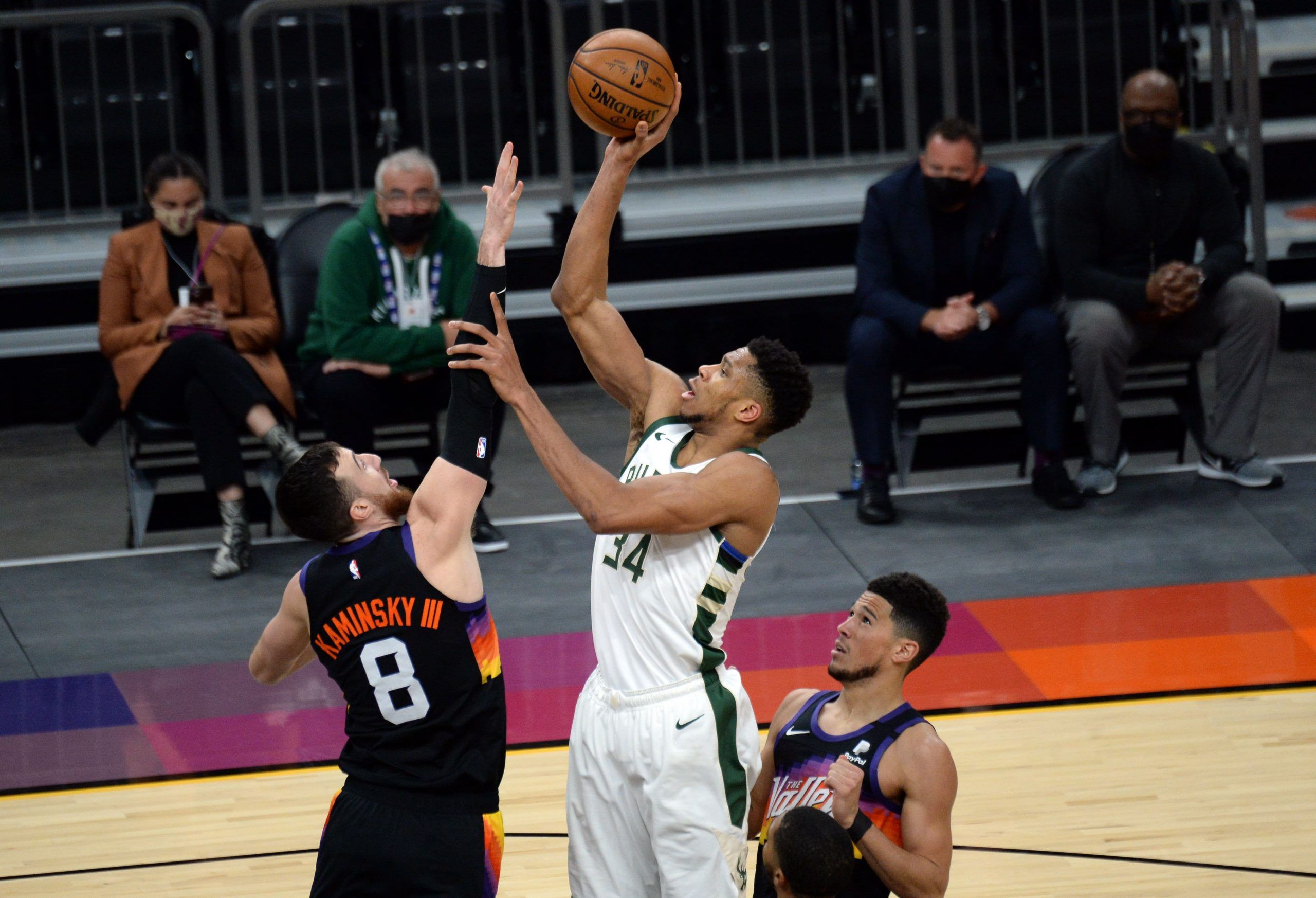 Since graduating from Davidson (The College That Stephen Curry Built), I have been writing about sports--just about any and all you can think of!--and coaching tennis in Atlanta, Ga. Beyond the four major sports, I am an avid tennis fan and cover the ATP Tour on a daily basis. If I'm not busy writing, you can generally find me on a tennis court or traveling the world wherever a sporting event takes me.
@Dimonator133
Updated: 5:09 AM ET July 12, 2021

The home fans have been thrilled with the NBA Finals. In each of the first two games, the Phoenix Suns treated the crowd inside Talking Stick Resort to convincing wins. The Milwaukee Bucks hit back in front of the Fiserv Forum faithful in Game 3 on Sunday night. Yes, the fans have gone home happy on all three occasions.

Outside of Phoenix and Milwaukee, however, if you haven’t yet tuned into this series you haven’t missed much.

That being said, now might be a good time to start strapping in and going along for the ride.

The Suns took each of the first two contests by double-digit margins, winning 118-105 in the opener and cruising to a 118-108 victory in Game 2. Those weren’t exactly blowouts, but they also weren’t especially competitive. Well, Game 3 was a blowout. Phoenix at least stayed within striking distance for a half, but things went out of control for the visitors starting in the third quarter. Milwaukee ended that frame on a 16-0 run to seize a 22-point lead going into the fourth.

You probably turned the game off at that point, but you had already witnessed another brilliant performance by Giannis Antetokounmpo. Channeling his inner Willis Reed, the Greek Freak has returned from his Eastern Conference Finals knee injury in impressive fashion with back-to-back 40-point efforts against the Suns. He finished Sunday’s romp with 41 points, 13 rebounds, six assists and one steal.

It’s about to get good

With Phoenix’s lead sliced in half from 2-0 to 2-1, we now have a series on our hands. It doesn’t take a genius to realize that Game 4 now has massive importance. If the Suns go home up 3-1, it’s all but over. If it’s 2-2, the Bucks take every ounce of momentum into what becomes a virtual best-of-three showdown.

I fully expect Game 4 to be by far the best contest so far in these NBA Finals. Antetokounmpo has three outings under his belt in his comeback and is already looking downright unstoppable — like a two-time NBA MVP. Milwaukee’s struggles that plagued this team in Phoenix are things of the past. At the same time, the Suns’ issues on Sunday can be easily explained and can without question be rectified. Devin Booker (3-for-14, 1-for-7 from three-point range) could not throw it in the ocean. Deandre Ayton was in foul trouble right from the start and logged only 24 minutes. By himself, Antetokounmpo attempted more free-throws than the entire Phoenix team (17 to 16) and also made more than the entire Phoenix team (13 to 11). Suns head coach Monty Williams brought out the ol’ I’m-going-to-complain-about-the-refs-by-saying-I-won’t-complain-about-the-refs play in his post-game press conference. Williams wasn’t happy, and he shouldn’t be happy about his squad’s lack of aggressiveness. Expect that to change on Wednesday.

Game 3 wasn’t particularly fun to watch, but it does set the stage for a thrilling rest of the series.

I had the Suns in seven at the start of the NBA Finals and there is no reason to flip-flop now — not after the home teams have looked dominant through three games. Despite Sunday’s success, the pressure remains on Milwaukee heading into Game 4 on Wednesday. Antetokounmpo and company have to take care of business again inside their own building if they want to go back to Phoenix with a realistic chance of capturing the title.

Based on what we saw on Sunday, they should be able to do just that.