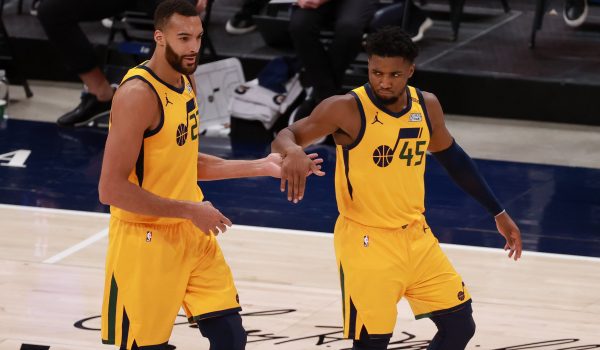 If either of tonight’s two Game 5s is exciting as last night’s between the Bucks and Nets, we’ll be in for a real treat!

Philadelphia hosts Atlanta starting at 7.30pm ET, followed by the Utah Jazz and Los Angeles Clippers squaring off in Salt Lake City at 10pm ET. Both games will be live on ESPN!

Our same game parlay for Jazz vs. Clippers is available below, but feel free to also check out our picks on the side and total for both of tonight’s matchups!

Only once so far in this series has the first quarter total gone over 56.5 points and that happened in Game 2 when the teams combined for 59 points. The series opener saw 43, Game 3 finished with 50, and Monday’s Game 4 at Staples Center had 43 points in the first 12 minutes of play.

Stakes will be a lot higher in Game 5 than they were in each of the four games played so far, so I expect defenses to tighten up even further which could result in a low-scoring opening quarter.

Be sure to check out our full game preview for Game 5 of Los Angeles Clippers vs. Utah Jazz

Utah has now been held to 106 points or fewer in back-to-back games, and the Clippers have come up with a good defensive strategy for forcing Mitchell’s teammates to beat them.

The Clippers have been scoring a lot the past couple of games, but only because they’ve been scorching hot from beyond the arc. If their shooting dries up a bit on the road their offense will tank quickly, because they won’t get much around the rim with Rudy Gobert roaming the paint.

Bogdanovic has been a reliable second-scoring option for the Jazz throughout their postseason run. He has scored in double figures in all but Game 3 of this series. He’s currently attempting 5.3 threes per game against the Clippers and making 2.3 of them. In the first two games played in Salt Lake City he had three of them in each.

In fact, if we look at only home games in the playoffs he has gone over 2.5 threes in four of five games, so playing in front of the home crowd is definitely a confidence boost for the sharpshooter from Croatia. It’s always good to have a backup plan, so if the Clippers limit Mitchell the Jazz can rely on Bogdanovic to carry them offensively.

Reggie Jackson has been a solid contributor in the playoffs for LA. In three of the four games against the Jazz he has had over 2.5 assists. In the series against Dallas, he went over 2.5 assists in four of seven games as well. Aside from Kawhi Leonard and Paul George he is the primary ball-handler for the Clippers. Those two have been red-hot scoring the ball so I don’t think Jackson will get many shot attempts tonight, he will be more focused on distributing the ball as that will give LA the best chance of getting something out of this game.

Be sure to check out our full game preview for Game 5 of Atlanta Hawks vs. Philadelphia 76ers