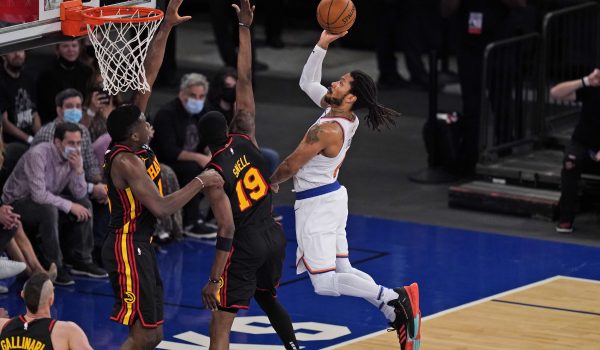 The NBA Playoffs haven’t been this fun in years and it all continues tonight with three more Game 3s! We’ve got a same game parlay for the New York Knicks vs Atlanta Hawks clash live on ESPN at 7pm ET.

Don’t forget to also check our predictions on the side and total for each of tonight’s high-stakes matchups, but for now let’s focus on the Knicks and Hawks.

With the series moving to Atlanta, the Hawks are favored for the first time. The interesting shift is that they are favored by a lot more than the Knicks were at home. This caught my eye because the Hawks were 0-3 SUATS against the Knicks during the season and needed every second of the first game of the series just to get the win. Coming off a loss, I am surprised they are such significant favorites so this looks like a buying opportunity for me. Atlanta does have strong home splits but their home arena is not known for providing much of an advantage. New York now has some confidence and they could pull off the upset here.

Be sure to check out our full game preview for New York Knicks vs. Atlanta Hawks.

After what the Knicks fans did to him over the first two games at the Garden, Young will definitely be fired up the rest of this series. His averages through the first two games are impressive considering both games were on the road. He’s at 31 points per game, 51.2 percent from the field and 50 percent from three. He was also perfect form the free-throw line, draining all 13 attempts. The Atlanta offense depends on him having a good game and I have no reason to doubt he can have yet another 30-point explosion in front of the home crowd.

The savvy veteran Rose has been critical for the Knicks in this series so far. He opened the series with a 17 point burst off the bench in Game 1 shooting 50 percent from the field. In Game 2 his role was expanded even further as he started the second half as opposed to coming off the bench. Tom Thibodeau has a lot of faith in him dating back to their times at Chicago, Rose rewarded him with 26 points and a win in Game 2. With the series shifting to Atlanta, Rose will play big minutes yet again as I doubt the Knicks will rely on inexperienced RJ Barret and Immanuel Quickley.