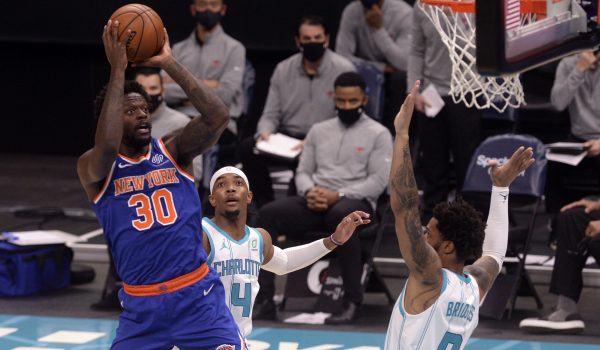 The early Saturday tip-off is in New York where the red hot Knicks host the Toronto Raptors live on ESPN at 1pm ET. After that we have a rematch between the Philadelphia 76ers and Milwaukee Bucks who played on Thursday, also live on ESPN at 3.30 pm ET!

The night will be concluded with the Los Angeles Lakers and Dallas Mavericks squaring off at 8.30pm ET live on ABC.

Our focus is on the Raptors vs Knicks for the same-game parlay, but feel free to check our website for picks on the side and total on the other seven games!

Julius Randle To Record A Triple-Double (+550)

The hype surrounding the New York Knicks keeps increasing with every win. They’ve now won eight in a row and own the longest win streak in the NBA at the moment. The Knicks have also covered in their last six at home, winning their last five games by an average of 10 points and shooting close to 50 percent. During the win streak New York has had the fifth best offense in the NBA, their effective three-point percentage increased from 52 to 54.4. They have covered in 15 of their last 21 home games and in 21 of their last 28 games overall.

He has been playing well lately, over his last 10 games he has averaged 24.1 points per game and shot a solid 47.7 percent from the field and 87 percent from the free-throw line. He is coming off a strong performance against the Brooklyn Nets where he scored 27 points and had nine rebounds plus six assists. He went over 21.5 points six times in his last eight outings and is one of the main reasons why the Raptors have won their last four games.

Julius Randle To Record A Triple-Double (+550)

Let’s be clear this is a long shot bet, but triple-doubles happen a lot more often in today’s NBA than they used to and when they hit the reward is massive. Randle is flirting with a triple-double on a nightly basis, against the Hawks on Wednesday he had 40 points, 11 rebounds and six assists. For the entire month of April he is averaging 27 points, 9.3 rebounds and 7.3 assists, notching a triple-double on two occasions. For the season he is at five total which is tied with LeBron James for seventh overall in the NBA. He has had a double-double in four of his last six games and it’s only a matter of time we see him get one, tonight could be the night.