With new five-year, $75 million contract in hand, Kittle aims for even bigger things in 2020 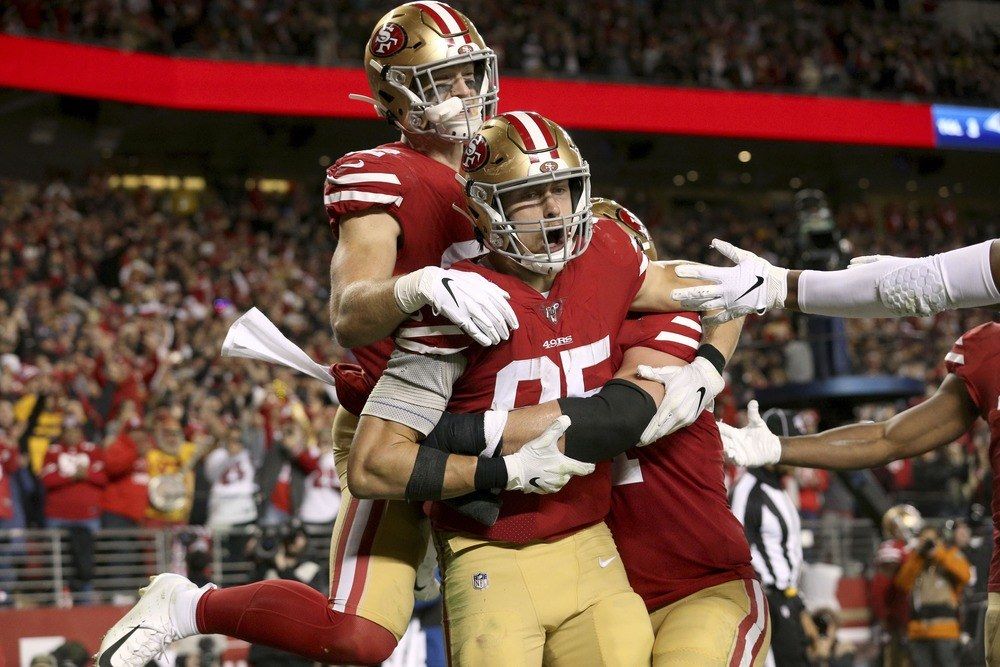 “I think we don’t have to say how important George is to us, and not only as being the best tight end to me in the league, but also the type of person he is,” head coach Kyle Shanahan said last week. “So we’re doing everything we can to get [a contract] done…. I feel really good about this going forward, and I feel very optimistic about it. Hopefully something will happen sooner than later. I’m not too concerned about it.”

Shanahan clearly had no reason to be concerned, as team management—led by general manager John Lynch—have now gotten it done. According to reports, the deal includes $30 million guaranteed right now and $40 million more guaranteed in case of serious injury. It far exceeds the four-year, $42 million contract signed by former Atlanta Falcons tight end Austin Hooper with the Cleveland Browns this spring.

What to expect from Kittle in 2020
Just how good is Kittle? Well, last season he helped San Francisco win the NFC West and reach the Super Bowl after making 85 catches for 1,053 yards and five touchdowns. Three years into a career he has more receiving yards than anyone at his position in league history (2,945). That number includes a 1,377-yard effort in 2018. Even when you take receivers into the equation, over the past two seasons the former Iowa standout is still sixth in the NFL with 2,430 receiving yards, second with 1,464 yards after catch, and 11th with 173 catches.

Can Kittle be even better? His receiving yardage total is currently set at 1,050.5 yards, which means he only has to improve 23 yards in order to go over. That seems reasonable, especially considering that his 2019 numbers came in just 14 games. You can never assume injury, and Kittle has proven to be durable so far in his pro career (15 games as a rookie, 16 in 2018, and then 14 last year) so there is reason to expect he can turn in a full 16-game slate this season. If that is the case, he needs to average a well-within-reach 65.6 yards per game to go over. He exceeded that nine times in the last 11 regular-season games of the 2019 campaign. In 2018, two of the last four games saw him go for 2010 and 149 yards.

George Kittle just signed the largest deal in NFL history for a TE! 💰

Especially given the excitement surrounding this deal, it should be expected that the yardage prop total will only increase as the season draws nearer—so it could be wise to jump on it sooner rather than later if you also feel good about an over play.

As Shanahan suggested, there was never any real concern that Kittle would not be signed to a long-term deal. So nothing really changes from a team standpoint—not in the long-term future and certainly not this season, for which he was already signed even before Thursday’s development. The 49ers are favorites to win their division and conference at -106 for the NFC West and +450 to for the NFC, and +900 to win the Super Bowl (third favorite). Their win total remains at 10.5 (which we like over) and they are -335 to make the playoffs.

Of those, +450 to repeat as conference champions may have the best value. Teams’ Super Bowl odds are often twice as high as their conference number and that is exactly the case with San Francisco, but you would expect an even bigger discrepancy in 2020 given that by far the two best NFL teams on paper both reside in the AFC – Kansas City and Baltimore.

Whatever the case, Kittle and the Niners are generally good bets this year…and probably now for five more years into the future!

Get ready for NFL week one by bookmarking our free NFL picks against the spread homepage!