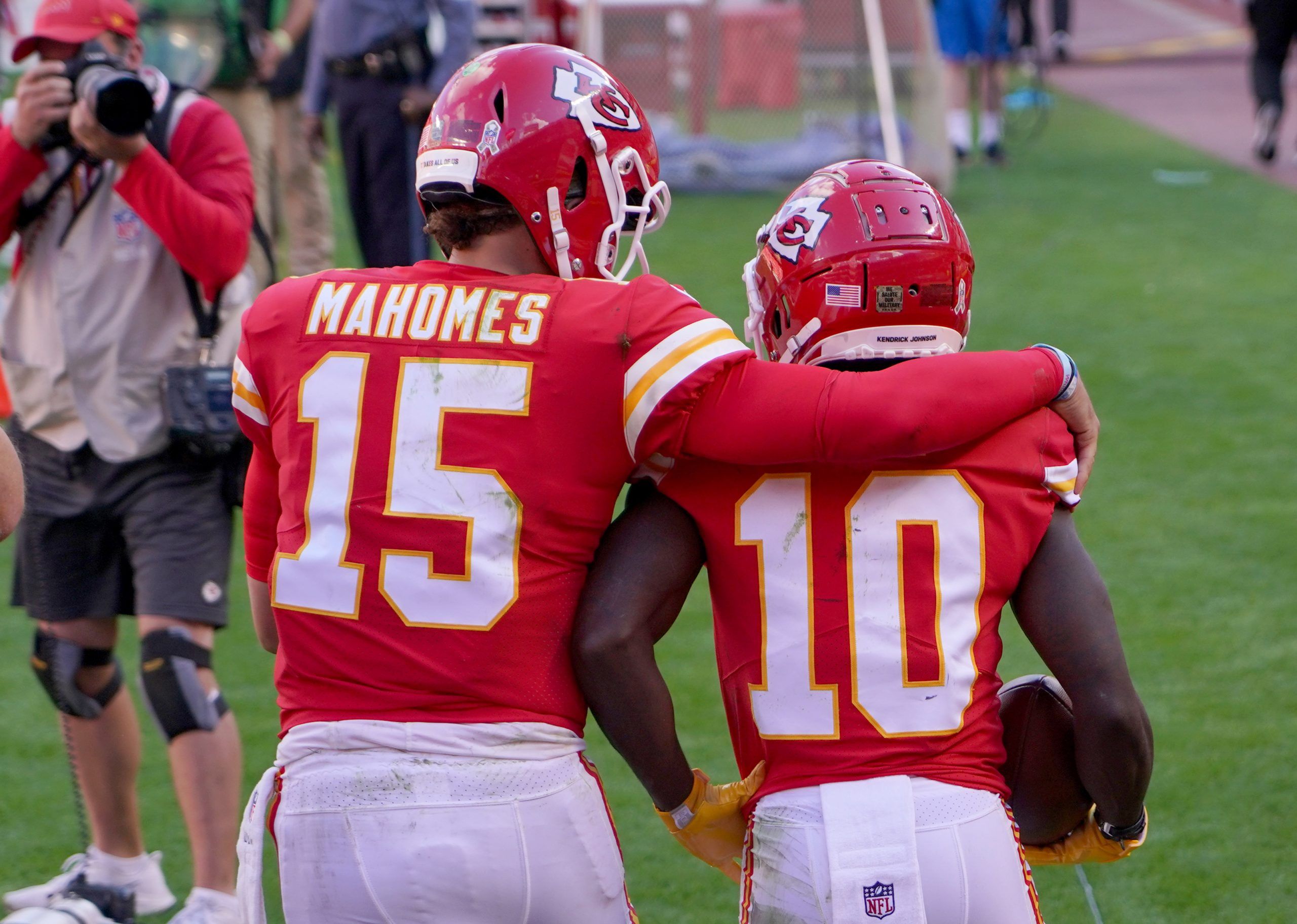 There’s a red-hot divisional matchup to look forward to for Sunday Night Football in Week 11 as the Las Vegas Raiders host the Kansas City Chiefs.

The Raiders handed the Chiefs their sole loss of the season last month, winning 40-32 at Arrowhead Stadium. Now Kansas City looks to get some revenge in what looks set to be a classic encounter.

A same game parlay with FanDuel or PointsBet offers bettors the chance for a huge payout and enhances the excitement of this high-stakes matchup. You can check out our full preview of the game, which features picks on the side and total, as well as our other picks for Week 11.

Devontae Booker to score a touchdown (+380)

All of these picks are correlated, as a high-scoring game should mean plenty of big passes from Patrick Mahomes, and you’d expect Tyreek Hill to be making his way into the endzone. Throwing in Booker to score a touchdown is a bit of a wild card, but I’ll explain my reasoning for that further down.

Although this line is very high, I still think you’ve got to be rolling with the under. For starters, the last meeting between these two teams saw 72 points scored, and the way both have been playing suggests another shootout. The Chiefs have scored 32 points or more in four of their last five games, and now they’ll be going against a Raiders defense that has faced all sorts of preparation problems this week due to COVID. The game also takes place indoors at Allegiant Stadium, so I’ll be shocked if the Chiefs offense isn’t at full throttle.

Las Vegas hasn’t been strangers to putting up a lot of points, either. As mentioned, they scored 40 points against this KC defense last month, and have tallied 68 points across their last two games. Expect plenty of fireworks.

A lot of the points I made about the total going over also apply to why I think Patrick Mahomes will hit 300 passing yards. He is playing amazing football right now, having totaled at least 416 and 372 passing yards each in his last two games, and putting up nine touchdowns in that period. Now, he is coming off a bye week so should be raring to go. The Chiefs know full well that the Raiders are the only team to beat them in 2020, and you’d better believe they’ll want to make a statement here. Facing a defense that hasn’t practiced all week, Mahomes should put up some big numbers.

Again, this is another hugely correlated play with the other two. If this game is going to feature at least 57 points and Patrick Mahomes lighting it up through the air, I would be gobsmacked if Tyreek Hill wasn’t on the receiving end of a touchdown pass. He has found the endzone in seven of Kansas City’s nine games this season and posted five scores in his last three games. Granted, one of the two games where Hill didn’t score a touchdown was against Vegas, but I expect that to motivate him even more for this one.

I hate to keep referring to it, but the fact the Raiders’ defense has had issues practicing this week makes this play all the more appealing. Hill is one of the hardest players to cover when you’ve had a full week of practice in, so how difficult is it going to be when you’re not even totally prepared?

Devontae Booker to score a touchdown (+380)

I’ve hyped up the Chiefs a lot here, but I don’t think this one will be a total blowout. I mean, for there to be 57 points or more we kind of need the Raiders to put some points on the board anyway. At big odds, I like Devontae Booker’s chances of doing just that. Booker has featured a lot more in the Raiders offense recently, and has been part of an effective tandem with Josh Jacobs.

The Utah product has scored three touchdowns in his last two games, including two last week against Denver. He performed well against Kansas City last month, posting 62 rushing yards off seven carries. The Chiefs have shown some vulnerability against the run, and have allowed 4.8 yards per carry this season, the fourth-most in the league. Throw in Booker to score to really boost the odds of this same game parlay.