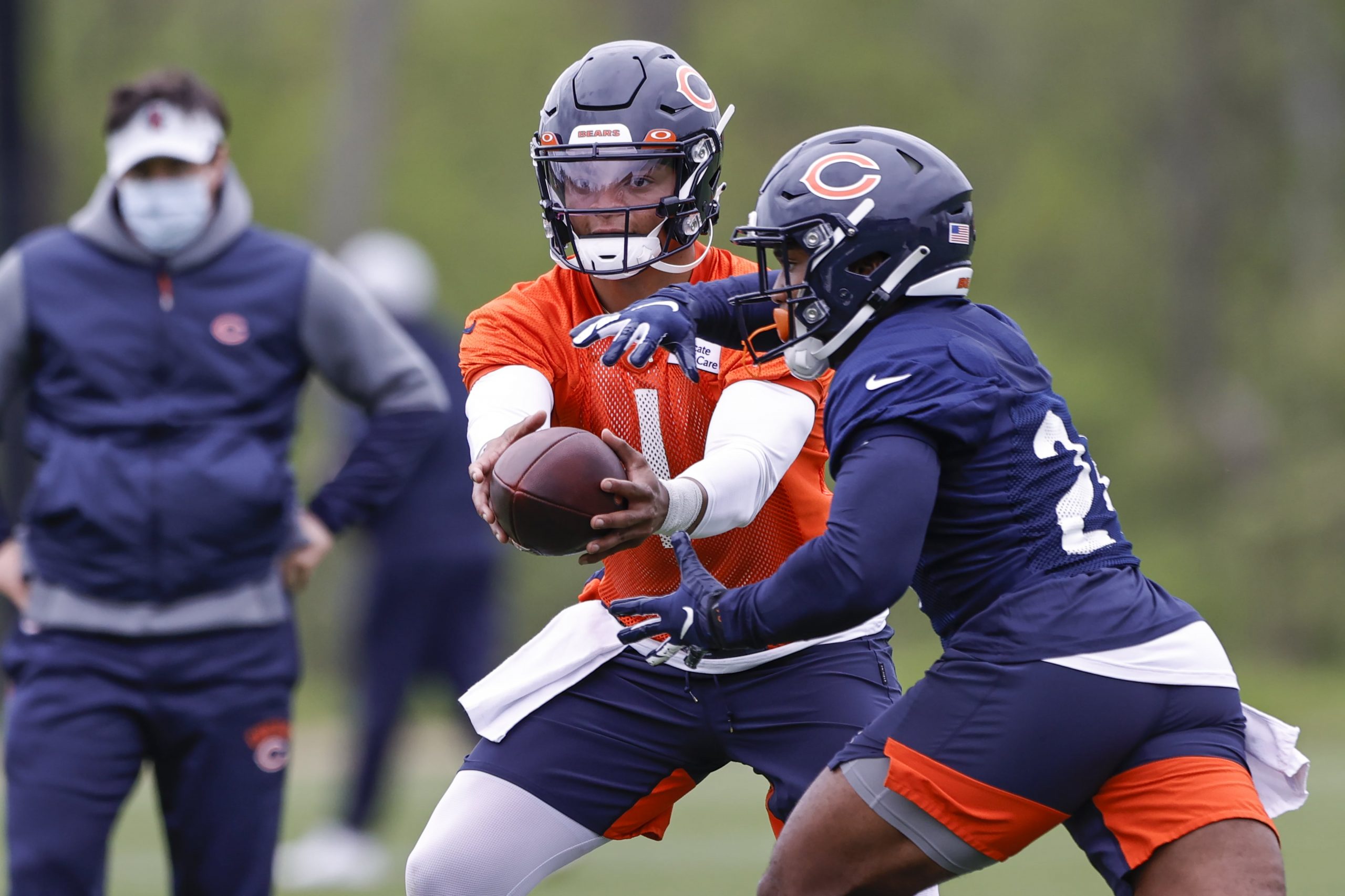 With OTA’s underway, mini camps around the corner, and training camps on the horizon, the annual conversation around QB competitions — and Week 1 starting quarterbacks — is also ready to hit the headlines.

There are five main spots that look set for QB competitions in training camp with the Saints, 49ers, Bears, Patriots, and Broncos all yet to publicly nail their colors to the mast at QB. We take a look at each of these five situations and assess who the likeliest starter is in each spot, whilst looking at the latest Week 1 Starting QB odds.

Who will be the Chicago Bears starting QB in Week 1?

The Chicago Bears brought in veteran QB Andy Dalton this offseason and even went as far as announcing him as QB1 ahead of the draft, but then they took Justin Fields with the 11th overall pick in the 2021 NFL Draft. While they haven’t retracted that Dalton is their QB1, I wouldn’t be shocked if we do in fact see Fields light up training camp and force Matt Nagy’s hand.

Getting Fields at 11 could end up being the steal of the draft and in a year where Matt Nagy’s job is likely on the line, I’m not sure he can play it safe with the experienced Dalton who failed to get anything going on a better Dallas Cowboys team last season.

In Nagy’s final year as offensive coordinator in Kansas City, the Chiefs had drafted and sat Patrick Mahomes behind Alex Smith, a luxury that Nagy would love to have here with Fields in Chicago, but it’s simply a luxury he doesn’t have. I’m riding with Fields to show enough to secure the Week 1 starting role at +200.

Who will be the Denver Broncos starting QB in Week 1? 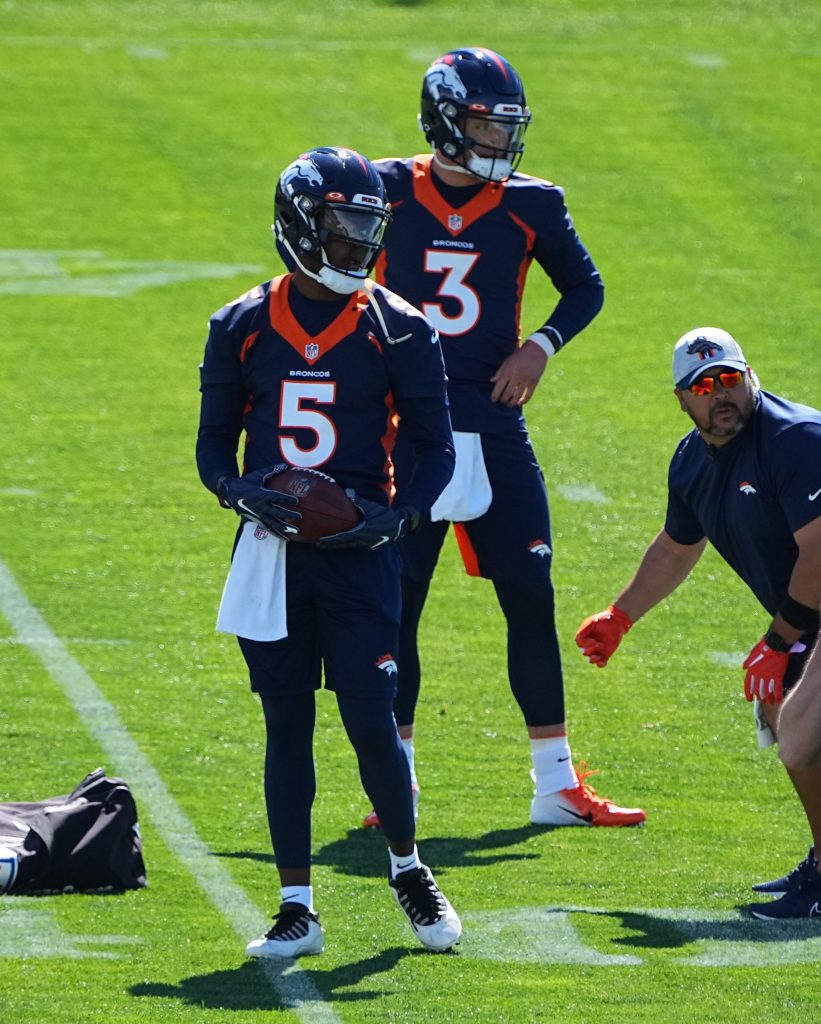 Unless the Broncos can pull off the biggest offseason move and make something happen with the Packers to land league MVP Aaron Rodgers, the 2021 QB competition in Denver looks set to be between Drew Lock and Teddy Bridgewater.

The Broncos traded for Teddy Bridgewater ahead of the draft to add competition, experience, and a veteran presence to the Broncos’ quarterback room, but that doesn’t necessarily mean the Broncos are out on Drew Lock — not yet, anyway.

One of the biggest reasons for the Broncos to stick with Lock over Teddy is his athleticism and upside. Lock is bigger, faster, and certainly has a stronger arm than Bridgewater, and while this hasn’t always resulted in success for Lock, with 15 interceptions and 8 fumbles in 2020, Bridgewater wasn’t as safe with the ball as he often gets painted as being, with 11 interceptions and 6 fumbles of his own.

The Broncos also brought back Pat Shurmur as offensive coordinator for some continuity, and there wouldn’t be much continuity without Lock returning as the starter. I’m surprised the odds have Lock and Teddy so close, with FanDuel having them both at +145, and I think there is value there in taking Lock to be the Week 1 starter with Rodgers likely staying put in Green Bay.

Who will be the New Orleans Saints starting QB in Week 1?

Taysom Hill signed a $140m extension this offseason but that was merely a play to reduce the cap hit and the majority of it is voidable. He did go 3-1 in a four-game stretch as the starter in 2020 but failed to throw for more than 300 yards in a game, throwing four touchdowns and two interceptions in that stretch. Hill is a unique weapon for the Saints, but more so with his legs and as a gadget guy, and that’s how I see it staying.

In his last season in Tampa, Jameis threw for 5,109 yards, 33 touchdowns, and 30 interceptions. Turnovers plagued Winston in Tampa, but sitting behind Drew Brees for a year would have done him the world of good, and the Bucs weren’t totally out on him until Tom Brady became available. Jameis has plenty of football left to play in the league and I can see him taking a big step forward this season as a starter again with a talented team around him. At -250 the odds don’t offer a great deal of value to a bettor, but it would be a big shock to me if the Saints weren’t Jameis’ team in 2021.

Who will be the San Francisco 49ers starting QB in Week 1? The 49ers moved up to third in the 2021 NFL Draft and it became apparent they were there for a QB. The 49ers have been great when Jimmy Garoppolo has been healthy, but injuries have curtailed the two seasons on either side of their 2019 Super Bowl run.

Many had the 49ers taking Mac Jones or Justin Fields and it was only late in the day that the Trey Lance to San Francisco narrative took shape. The fact they did go for Lance, who sat out the majority of 2020, and had only started 16 games at North Dakota State prior to that, over a more ‘ready-made’ QB like Fields suggests to me that Jimmy G is still their guy for now.

It just makes too much sense for Jimmy G to begin the 2021 season as the starter, with Lance ready if Jimmy G fails to fire or picks up another injury that sidelines him. The sportsbooks seem to agree with Jimmy G being as short as -278 to start week 1, but it seems like a lock to me.

Who will be the New England Patriots starting QB in Week 1?

Situations are situational and Cam’s in New England last year was about as dire as it could have been. He was brought in late to fill none other than Tom Brady’s shoes, in a year where COVID-19 heavily impacted the offseason. Learning a totally new offense without even being able to meet your teammates is a near-impossible task, and then you add in Cam actually getting COVID and missing more time, I think his sup-par play in 2020 is excusable. With a full offseason under his belt, I can see Cam Newton having a bounce-back year in a more familiar offense.

Mac Jones has reportedly impressed with his football IQ and has grasped the offseason program and concepts well from the jump, but it’ll take more than that to beat out a veteran like Cam Newton who still possesses all of the physical tools to succeed in year one. While Mac Jones is likely the New England Patriots’ future, Cam Newton remains their QB and leader in 2021 and is sitting at -270 with FanDuel to be the New England Patriots’ Week 1 starter.

Pickswise is the home of free Expert NFL Picks and NFL Odds. Be sure to check out all of our season previews and NFL Futures Bets leading up to the 2022 NFL Season.