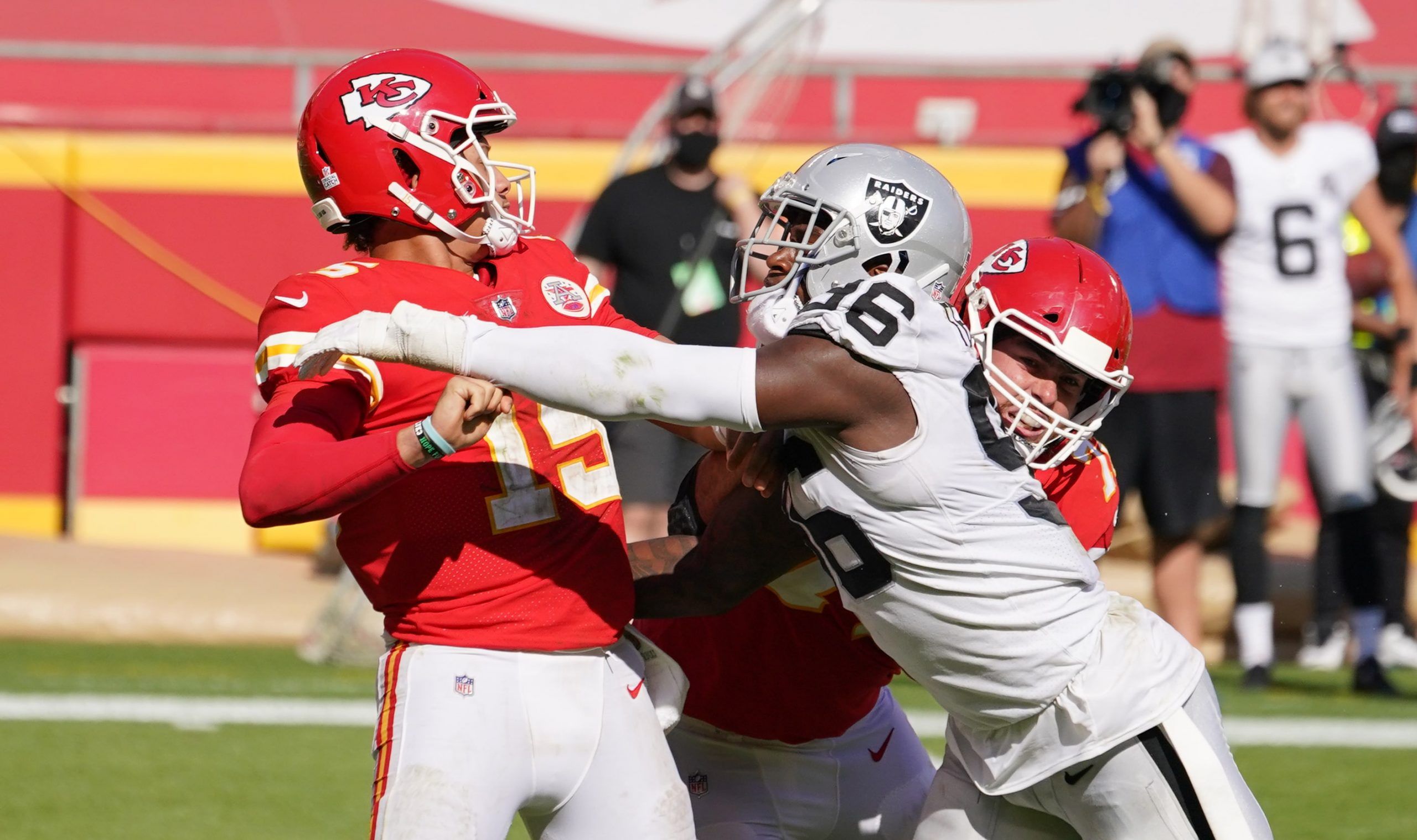 Sunday Night Football will feature a matchup between two AFC West rivals as the Las Vegas Raiders host the Kansas City Chiefs at their shiny new stadium. Kansas City is fresh off their bye week at 8-1, while the Raiders just improved to 6-3 with their win over the Broncos. The Chiefs are looking for revenge here after Las Vegas pulled off an improbable upset at Arrowhead earlier this year.

Despite winning the first matchup this season, oddsmakers have the Raiders as a sizable home underdog for this one. We’ve got plenty of thoughts on the game, including picks for the side and total, but right now we’ll be talking about some daily fantasy. Here’s what we’re rolling with in this single-game DraftKings showdown format:

I think we’re going to see an atomic Mahomes game here. Andy Reid offenses always look excellent coming off the bye, and with a full extra week to scheme for this lackluster Raiders defense, I expect Kansas City to come out on fire offensively. Pretty much the entire Raiders’ starting defense was unable to practice this week due to COVD-19 issues, which is a recipe for disaster against Mahomes. There’s also some extra motivation here, as the Chiefs made it clear they took issue with the Raiders taking a victory lap around their parking lot after the first meeting between these teams.

The next best option behind Jacobs is Mahomes. The Chiefs’ secondary has quietly grown into one of the best in the league as they’re only giving up 6.6 yards per pass attempt this season, but their run defense is exploitable. Jon Gruden knows this, and I expect him to come out with a run-heavy game-plan here that features Jacobs. He’s coming off a monster game where he finished with 32.6 fantasy points, and there’s no way you can not play him here.

In order to get Mahomes and Jacobs both in our lineups we’re going to need to have some cheaper options, and Bell makes a lot of sense here. He hasn’t shined too much during his brief time with the Chiefs, but I think Reid may have been waiting for the bye to get Bell more involved on offense and draw up some plays for him. Getting a player with Bell’s upside at only $1400 is something you have to do if you want to actually land near the top of a large tournament.

Whenever you play Mahomes, you have to play Hill with him. He went off last week, racking up 113 yards and two touchdowns. What’s wild is that his day could’ve been even bigger, as he only caught nine of his whopping 18 targets. He should see ridiculous volume once again, and he’s facing a Raiders secondary that is very beatable over the top. The last time these teams played Hill managed to finish with 18.3 fantasy points despite only having three catches.

In order to squeeze in Hill at his hefty salary, we’re going to have to go cheap for our final two slots. In case it wasn’t clear by now, I’m expecting a big game from this Chiefs offense, and Butker should benefit as well. He’s got as much range as any kicker in the NFL, and can hit from 50+ with no problems. He’s actually got higher upside than a lot of the skill position players in this game. This way you won’t have to get too angry if the Chiefs stall out and have to settle for field goals.

I love Hardman here now that Sammy Watkins has been surprisingly ruled out at the last minute. That means Hardman gets another week as the number two receiver in this elite offense. He tends to make the most of these opportunities, and two weeks ago he had 96 yards and a touchdown against the Jets. With the Chiefs expected to score as many points as they are here, everybody will be able to eat on offense.