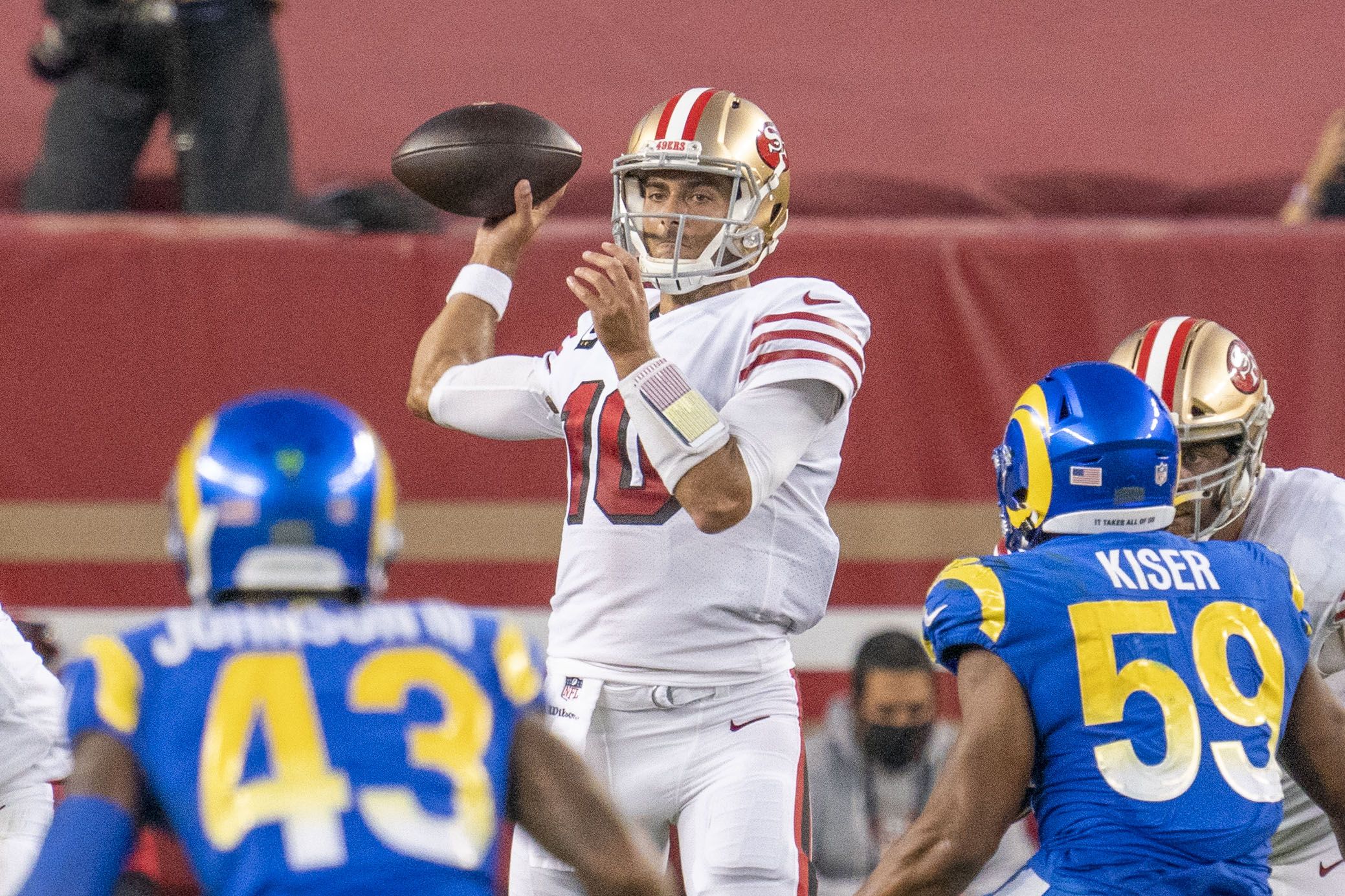 I'm an NFL handicapper here at Pickswise who was raised in a household full of sports fanatics. Since I unfortunately never had LeBron James' jumping ability I wasn't able to make it to the NBA, and chose writing about sports as the next best thing. An avid sports bettor myself, I'm excited to get to write about the industry as it gets set to take off across the country. Buckle up.
Updated: 4:39 AM ET October 19, 2020

The panic about the San Francisco 49ers was omnipresent following their blowout loss to the Dolphins last week. Just about everybody wrote off the defending NFC champions following their 2-3 start, declaring 2020 a lost year for Kyle Shanahan’s squad.

The 49ers showed in their decisive win over the Rams on Sunday Night Football that all that panic was premature, and that they’re very much still a force to be reckoned with. This team isn’t going to just roll over because of some of the bad breaks they’ve caught, and the NFC West is far from decided.

Jimmy Garoppolo silenced a lot of doubters as he averaged 8.1 yards per attempt while tossing three touchdowns and no interceptions. For at least one night they looked like their old selves, and for a couple of reasons I think they’ll be able to keep it going.

The defense is still a force

The 49ers got caught sleeping last week against Miami, but outside of that game the defense has been playing well all things considered. Even with all the injuries they’ve suffered they dominated the Rams on Sunday, making Jared Goff look like a deer in headlights. They completely derailed a Rams offense that had been clicking this season, and held Goff to only 198 yards with an interception.

Jason Verrett has been a revelation at corner and should legitimately be in the Comeback Player of the Year conversation if he keeps this up. It was always going to take this unit a little while to adjust with all the guys that went down early in the season, and I think defensive coordinator Robert Saleh is doing a fantastic job.

Garoppolo showed he’s capable of still having this 49ers passing game operating at a high level, and the defense isn’t going to suddenly fall apart just because Ryan Fitzpatrick picked them apart one time. They’ve got their work cut out for them as they’re about to face a tough slate of opponent offenses, but I think they’re up to the challenge. This is still a team that’s top-five in yards per game allowed.

Everything went wrong for the #RamsHouse here… #FTTB +3.0 hanging onto the large lead ✅

The story of this season so far has been all the injuries. So many key guys have gotten hurt that it’s hard to keep track of, but fortunately they’re on the mend. Starting cornerback Emmanuel Moseley returned against Los Angeles, and top shutdown corner Richard Sherman should hopefully be back from his calf injury soon.

With Moseley, Sherman, and Verrett, the 49ers will go from being thin at corner to having very solid depth at the position. Starting linebacker Kwon Alexander missed the game against the Rams, but he shouldn’t be sidelined too long with his ankle injury.

49ers pass-catchers were dropping like flies at the beginning of the season, but the receiving corp is pretty much back to full strength. Top wideout Deebo Samuel missed the first three games, but now that he’s back and playing with Garoppolo, he should start to ramp up soon. He’s been doing a bit more in each game as Shanahan has eased him in, and he had six catches on Sunday night.

George Kittle is clearly over the knee issue that caused him to miss two and a half games, and he was dominant against the Rams. The backfield should also look 100 percent soon, as Tevin Coleman should return any week now and Raheem Mostert just came back from his knee issue, although he did sprain his ankle against the Rams.

The 49ers had some absolutely brutal injury luck the first month of the season, but reinforcements are on the way. It’s important to note that their losses this season came while missing a big chunk of their starting lineup, and as they start to get healthier this team will continue to trend upward.

Basically sums up how the Rams defense is playing right now pic.twitter.com/EeT5PS1hiS

The obituaries were clearly premature, and this 49ers team isn’t just going to quietly slink into the basement of the NFC West. They’ve got a whole lot of fight in them, and this defense still has some of the tenacity that sparked their Super Bowl run last year. The upcoming schedule is a gauntlet, with their next six games coming against the Patriots, Seahawks, Packers, Saints, Rams, and Bills, but their health is trending upward and their injury woes are finally starting to subside a bit. We haven’t heard the last of them.