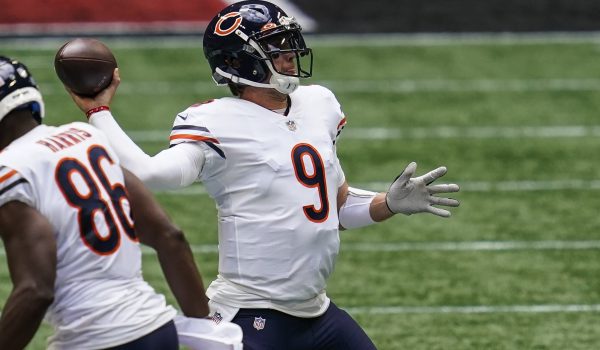 With the NFL back there are a ton of side and total bets to be made this weekend, and you can view the best of those by checking out our NFL picks for every Week 4 game.

However, there are also a lot of player props with plenty of value and that’s what we’ll be looking at here. Each week we’ll select our three best player prop bets, and here’s what we like the look of for the fourth Sunday of the 2020 NFL season.

Nick Foles gets his first start as Chicago’s quarterback and although he flourished last week when coming in against Atlanta I expect him to struggle against Indianapolis.

This Colts defense has allowed the fewest passing yards in the league, an average of just 132 yards per game. Although those came against some pretty woeful teams, is the Bears’ offense really any better?

Sure its struggles with Mitch Trubisky under center are well documented, but I don’t think Foles is this mega upgrade a lot of people seem to think he is. He blew up against the Falcons but that team has allowed the second-most passing yards. This line seems a big overreaction to me, and I’m happy to take the under.

Devin Singletary has recorded at least 20 receiving yards in each of Buffalo’s three games this season, and coming up against a team like Las Vegas who struggle to contain that threat makes this play a no-brainer.

Granted, the Raiders had to deal with Christian McCaffrey and Alvin Kamara in the first two weeks, who had a combined 133 receiving yards. But last week Rex Burkhead got in on the action for New England, posting 49 receiving yards and two touchdowns.

Singletary had four receptions for 50 yards last week against the Rams so quarterback Josh Allen clearly likes him as an option. Expect him to use that to full effect here.

After Baltimore was humiliated by Kansas City on Monday Night Football you’ve got to think the Ravens and Lamar Jackson will come out here with a point to prove.

One wide receiver who could benefit from that is Miles Boykin. Prior to that Chiefs game, the Notre Dame product had put up solid numbers with 37 and 38 receiving yards in his first two games of the season.

He is featuring a lot more in the offense this season with a good amount of targets from Jackson. Given the struggles of their opponents, the Washington Football Team, Boykin should have a couple of opportunities to make a play. It shouldn’t take much to top this line.

Looking for more expert picks? You can find out who we expect to score a touchdown for Week 4, along with our best underdog picks and who we think you should roll with for your Survivor pool.

NFL 6 days ago
With Aaron Rodgers officially holding out, is it time to Love or hate Packers on the betting market?

NFL 7 days ago
NFL Strength of Schedule: Who has the easiest and the toughest schedule in 2021?