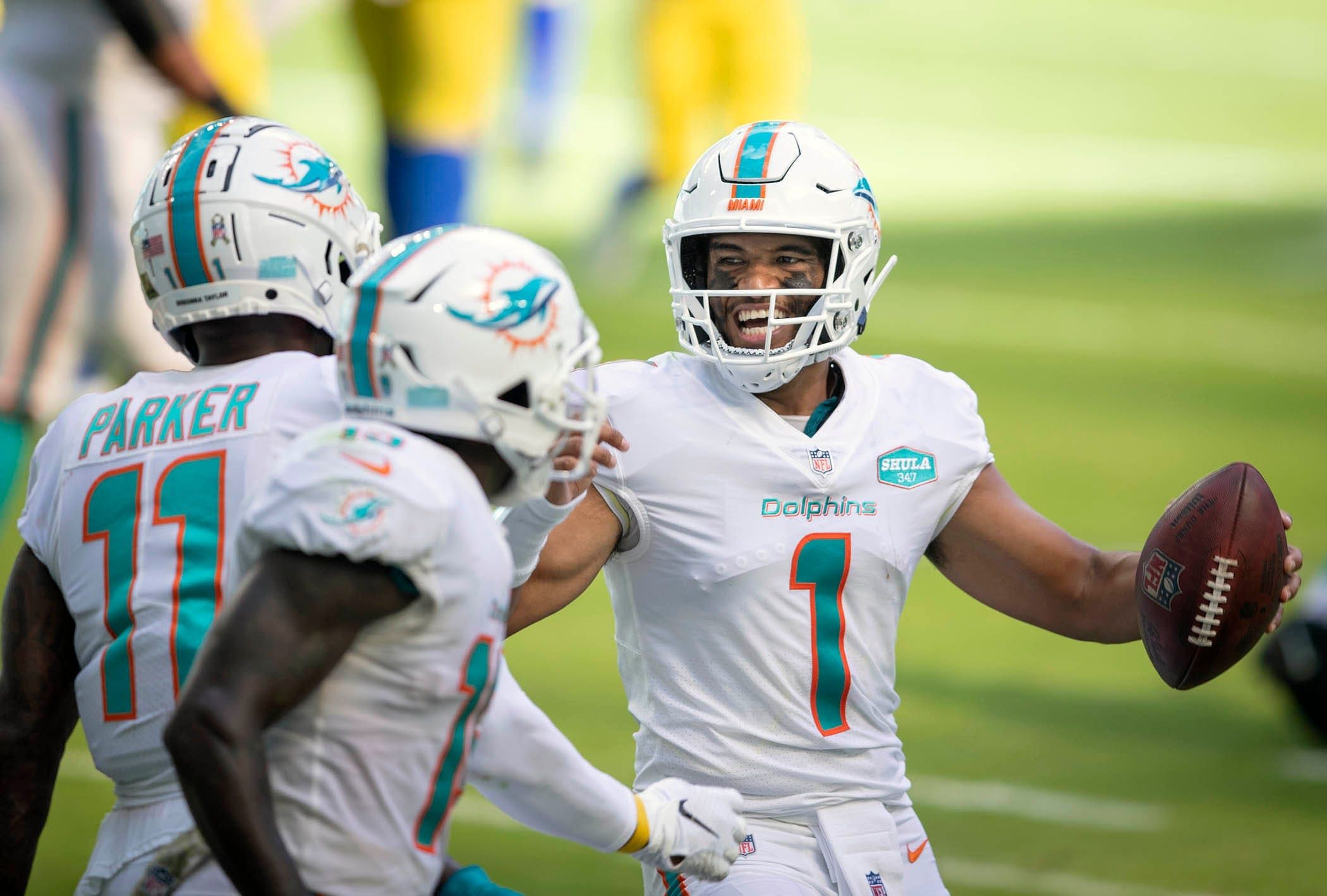 Well folks, Tua time is upon us.

It may not have been pretty, but Tua Tagovailoa won his first game as the starting quarterback of the Miami Dolphins. The Alabama product completed 12 of 22 pass attempts for 93 yards, and threw a three-yard touchdown pass to DeVante Parker in the first quarter. He also lost a fumble.

It was Miami’s third win in a row and they are now 4-3 and two wins behind Buffalo, who have played a game extra. By no means did Tua light it up, but with that victory the Dolphin’s have earned the right to be involved in the postseason discussion. In fact, I think this team is good enough to win the AFC East.

Stats-wise it may not have been the dream start Tua fans were hoping for, but the Dolphins got the job done and that’s what matters. He didn’t hit the heights of Justin Herbert in terms of yardage, but the way the game eventually panned out meant Tagovailoa never really had to air it out.

What he did do well, however, was bounce back from that early fumble. He lost the football after taking a nasty sack from Aaron Donald on just his second snap, which the Rams recovered on Miami’s 15-yard line. Los Angeles proceeded to score a touchdown two minutes later courtesy of Robert Woods.

For something like that to happen so early into his first start, you could almost have forgiven Tua for somewhat losing his head for the rest of the game. But he didn’t. He stayed cool, didn’t let it bother him, and made some nice throws to his receivers. His bullet pass to Parker to tie the game up at the end of the first quarter was perfectly timed (and perfectly held by Parker).

Tagovailoa was given a baptism of fire against this ferocious Rams defense, and he came away largely unscathed. Things should be a bit easier when the Dolphins face the Cardinals next week, who prior to Week 8 had allowed the tenth-most passing yards in the league.

TUA TAGOVAILOA WITH A BULLET FOR HIS FIRST TOUCHDOWN PASS #FinsUp +3.5 tie it up 7-7 ✅pic.twitter.com/BxnkSaUsVj

While all eyes were on Tua for his first career start, it was the Dolphins defense that really stole the show against the Rams, and not for the first time. Miami has now held opponents to 17 points or fewer in each of their last three games — which includes a shutout against the New York Jets.

Defensive end Emmanuel Ogbah forced a fumble from Jared Goff, which was returned for a 78-yard touchdown by Andrew Van Ginkel. That was followed up a few minutes later by a Jakeem Grant 88-yard punt return touchdown.

Those were a couple of fantastic plays on defense and special teams, but it would be an injustice to the Dolphins to call them one-offs. They have stepped up considerably over the past few weeks, and have registered at least one interception in their last five games. The addition of Byron Jones at cornerback has done wonders for their secondary, who has been on fire with Xavien Howard. Prior to Week 8, Miami had allowed the seventh-fewest passing yards in the league and the second-fewest passing touchdowns.

If the secondary and the rest of the defense continue to step up, the Dolphins will be a very tough team to beat.

Some might think that Miami being in contention for the AFC East is an overreaction, but I think they have been solid all season and just keep getting better. They have a fantastic head coach in Brian Flores who, let’s not forget, was given a team built to lose last year and still ended the year with a more than respectable 5-11 record. Oh, and they also have the first-round pick of the 1-6 Houston Texans next year.

They have a lot of winnable games coming up, and I expect them to pile the pressure on Buffalo in the race for the AFC East. The Bills started the season hot but things have slowed down considerably. They were well-beaten by the Chiefs and Titans, couldn’t score a touchdown in their 18-10 win over the Jets, and only just scraped past a struggling Patriots team. Buffalo host Seattle next week, and failure to win that game could really see the tide start to turn in the division.