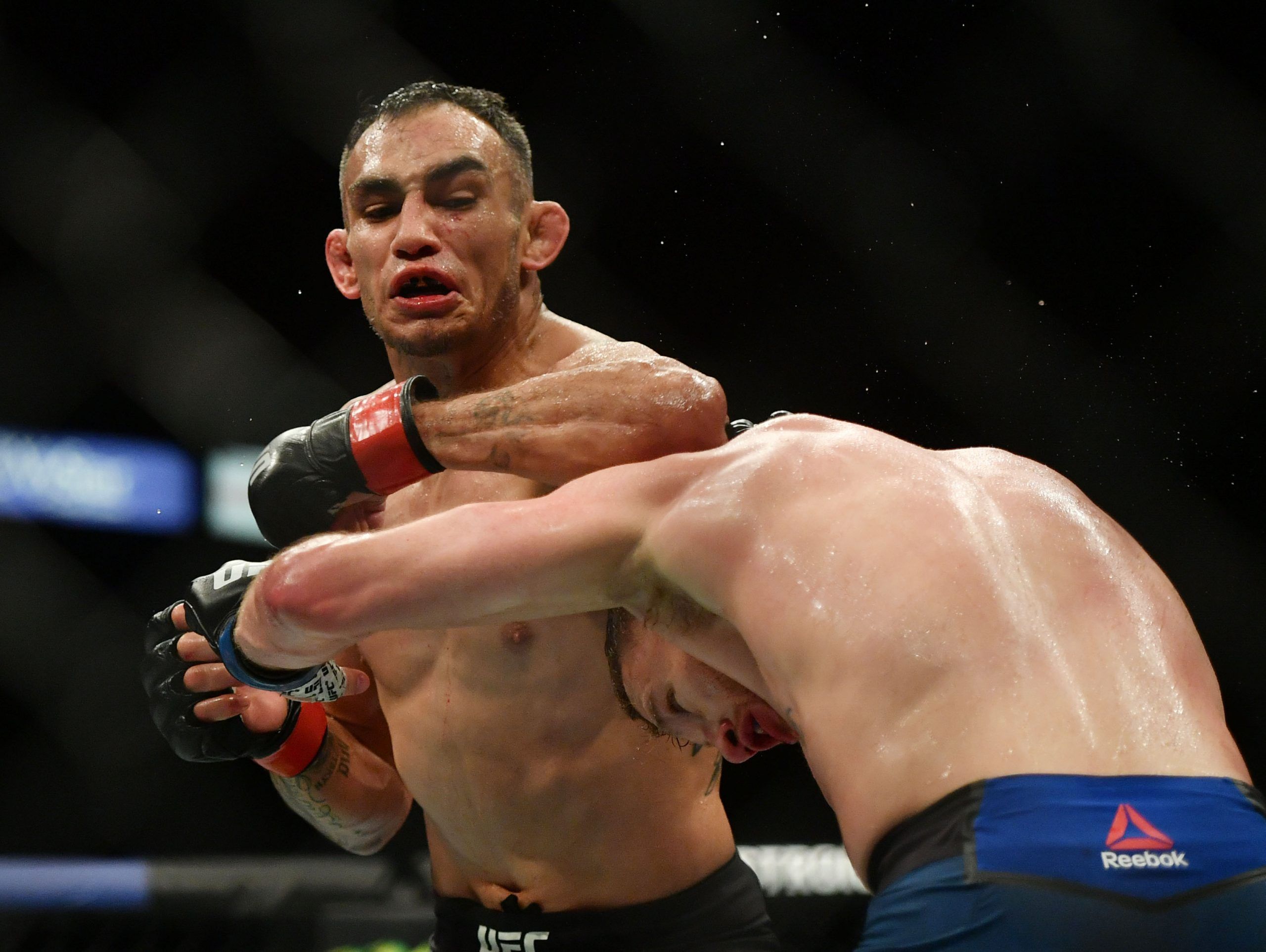 This week the Main Event at UFC 256 will feature a Flyweight title fight. There are some huge favorites among this event, so looking for a parlay could be the best way to find the most value.

Here is our favorite four-fight parlay that pays at odds of +554. Be sure to check out the rest of our UFC 256 predictions for the full 10-fight card.

Billy Quarantillo comes into this fight 4-0 in the UFC. He is starting to look like a guy who could make his case for the Featherweight title very soon. Quarantillo is averaging 7.51 significant strikes per minute and is landing them with an accuracy of 71%. He is absorbing 3.45 strikes per minute, but his striking defense is 46%. He also is a solid grappler, averaging 1.71 takedowns per every 15 minutes. On top of that, he averages 2.4 submission attempts during the same time period.

Gavin Tucker comes into this fight 3-1 in the UFC. He is averaging 3.67 significant strikes per minute an absorbing 3.93 strikes. The only issue here is his striking accuracy is only 39%. Tucker will probably look to take this fight to the ground instead, where he is averaging 1.91 takedowns per every 15 minutes. He also averages 1.9 submission attempts during the same time period. Tucker has a takedown accuracy of 35% and defends them just 40% of the time.

Quarantillo looks like a much more balanced fighter and is more accurate all around. They both have plenty of finishes, but I like Quarantillo’s striking ability far more, so I will back him here to get the win.

Mackenzie Dern vs. Virna Jandiroba, Fight to go the Distance – No (-144)

Mackenzie Dern comes into this fight 4-1 in the UFC. Her most recent win came back in September of this year, where she beat Randa Markos by submission. Dern is a decent striker, averaging 3.07 significant strikes per minute. Her striking accuracy is only 33%, which is concerning at best. She absorbs 3.66 strikes per minute, but her striking defense is 64%, which is good. Dern is averaging 0.39 takedowns per every 15 minutes, landing them at 7%. She also averages 3.1 submission attempts per every 15 minutes. She now has six submission wins in her career.

Virna Jandiroba comes into this fight 2-1 in the UFC. Her most recent win was back in August of this year, where she won by submission. Jandiroba is averaging 1.22 significant strikes per minute, an absorbing 1.52 strikes. Grappling is much more her style, averaging 4.57 takedowns per every 15 minutes and 3.3 during the same time period. She also lands her takedowns 50% of the time and defends them 60% of the time.

This is a fight that feels very even based on the grappling ability of both women. Combined they have 19 submissions wins and eight fights that went the distance. This is going to be more of a lean, but all I can see is a finish by submission, so I will back this fight to end inside the distance.

Tony Ferguson comes into this fight 26-4 in the MMA and 15-2 in the UFC. His fight with Justin Gaethje kicked off the restart of the UFC back in May of this year. Though Ferguson lost to Gaethje, he lasted far longer than anyone might have thought. Ferguson now is averaging 5.80 significant strikes per minute and is landing them with an accuracy of 45%. He is absorbing 4.04 strikes per minute and has a striking defense of 59%. Ferguson also has the ability to grapple, though he is averaging just 0.49 takedowns per every 15 minutes. More importantly, he defends takedowns 75% of the time an averages 1.2 submission attempts per every 15 minutes.

Charles Olivera comes into this fight 17-8 in the UFC. He is currently riding a seven-fight win streak, most recently beating Kevin Lee in March of this year. To be fair, while Olivera’s win streak is impressive, he has not necessarily fought the most prestigious guys. Before his win streak, he lost to Paul Felder, Anthony Pettis and Max Holloway. Those three guys are closer to what we should expect to Ferguson. Olivera is averaging 3.27 significant strikes per minute an absorbing 3.08 strikes. His grappling is a main component of his fighting style, averaging 2.61 takedowns per every 15 minutes and 2.8 submission attempts during the same time period.

I do not think Olivera is ready for a guy like Ferguson if I am honest. Ferguson may have lost to Gaethje, but he is still a top contender and I believe he gets the win here.

No surprise that Deiveson Figueiredo comes into this fight as a heavy favorite. He now 9-1 in the UFC. He is coming off a win at UFC 255 against Alex Perez. This was a win by technical submission an ended in the first round. Figueiredo is now averaging 2.79 strikes per minute, landing them with an accuracy of 55%. He absorbs very little as well, just 2.82 strikes. On the ground is where Figueiredo will want to be, considering he averages 1.68 takedowns per every 15 minutes and 3.0 submission attempts during the same time period.

The challenger, Brandon Moreno comes into this fight 7-2-1 in the UFC. He is averaging 3.01 significant strikes per minute. Though his striking accuracy is only 35%. At the same time, he absorbs 2.96 strikes per minute. Moreno has plenty of grappling ability as well, averaging 1.93 takedowns per every 15 minutes, but landing them just 44% of the time.

Figueiredo absolutely dominated Perez in his previous fight and I think he can pull off a similar win here. Moreno is a good young fighter, but this is too much of a step up in competition, so I will back Figueiredo to win by finish with medium confidence.