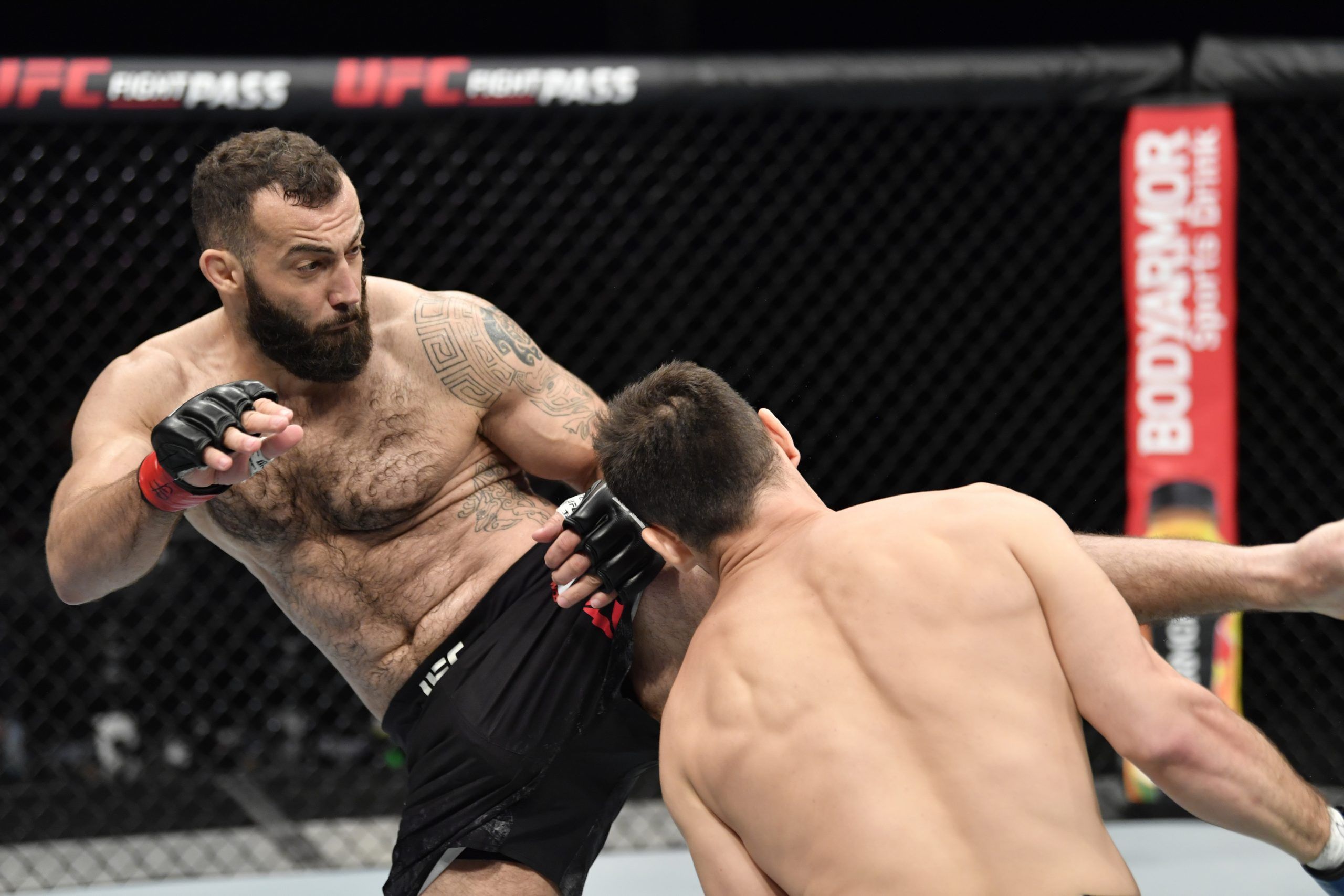 This week the Main Event at UFC on ESPN 19 will feature a Middleweight fight with title aspirations. There are some huge favorites among this event, so looking for a parlay could be the best way to find the most value.

Here is our favorite three-fight parlay that pays at odds of +435. Be sure to check out the rest of our UFC on ESPN 19 predictions for the full 11-fight card.

Jimmy Flick comes into this fight 15-5 in the MMA. He will be making his official UFC debut here after most recently earning a contract on Dana White’s Contender Series. Flick is not a high-volume striker, averaging just 2.04 significant strikes per minute. He is absorbing 1.28 strikes and has a striking defense of 61%. Flick looks to be an elite submission artist, and is so far averaging 7.9 submission attempts per every 15 minutes. He also averages 2.26 takedowns during the same period and lands them 66% of them time.

Cody Durden comes into this fight 11-2-1 in the MMA. He fought to a draw in his UFC debut back in August of this year. Durden is averaging 2.40 significant strikes per minute, while absorbing 4.40. He averages 2.00 takedowns per every 15 minutes, but only lands his takedowns 15% of the time.

Durden did not look very good striking wise in his UFC debut, so I am not overly concerned that he is going to score a knockout. I do think Flick’s grappling and his ability to submit is going to be the difference. For that reason, I will lean to a Flick submission for a plus money price.

Roman Dolidze comes into this fight a perfect 7-0 in the MMA. He won his UFC debut back in July of this year by TKO in the first round. Dolidze is averaging 4.47 significant strikes per minute and is landing them with an accuracy of 86%. He is absorbing 0.94 strikes, meaning he barely was touched in that UFC debut. He did not need to grapple in his debut, but it is worth noting that he has three submission wins in his career.

John Allen will make his official debut in the UFC and is 13-5 in the MMA. He is averaging 3.59 significant strikes per minute, while absorbing 4.39 strikes. Allen also averages 2.54 takedowns per every 15 minutes. He lands his takedowns 66% of the time and defends them 57% of the time.

Allen does look a little more balanced, but we have not yet seen the full arsenal of Dolidze. At least not in the UFC because he knocked out his opponent last time without breaking a sweat. Dolidze has a perfect finish rate as well, and I think we will see him dominate this fight.

Taila Santos comes in as the clear favorite and is 16-1 in her MMA career. She won her last fight against Molly McCann, beating her by unanimous decision back in July of this year. Santos is averaging 4.06 significant strikes per minute, while absorbing just 2.76 strikes. Her grappling has been extremely good, averaging 2.33 takedowns per every 15 minutes, landing them 77% of the time. She also defends takedowns 83% of the time.

Montana De La Rosa comes into this fight 11-6 in the MMA, losing her most recent fight by unanimous decision. She is now averaging 3.03 significant strikes per minute, but is only landing her strikes 35% of the time. She is absorbing 3.38 strikes and has a striking defense of 46%. De La Rosa also can grapple, but has not done so as effectively. She averages 1.96 takedowns per every 15 minutes, but has a takedown accuracy of 30%. She also defends takedowns 57% of the time. Santos is by far the more balanced fighter, so I like her to win this fight rather easily.