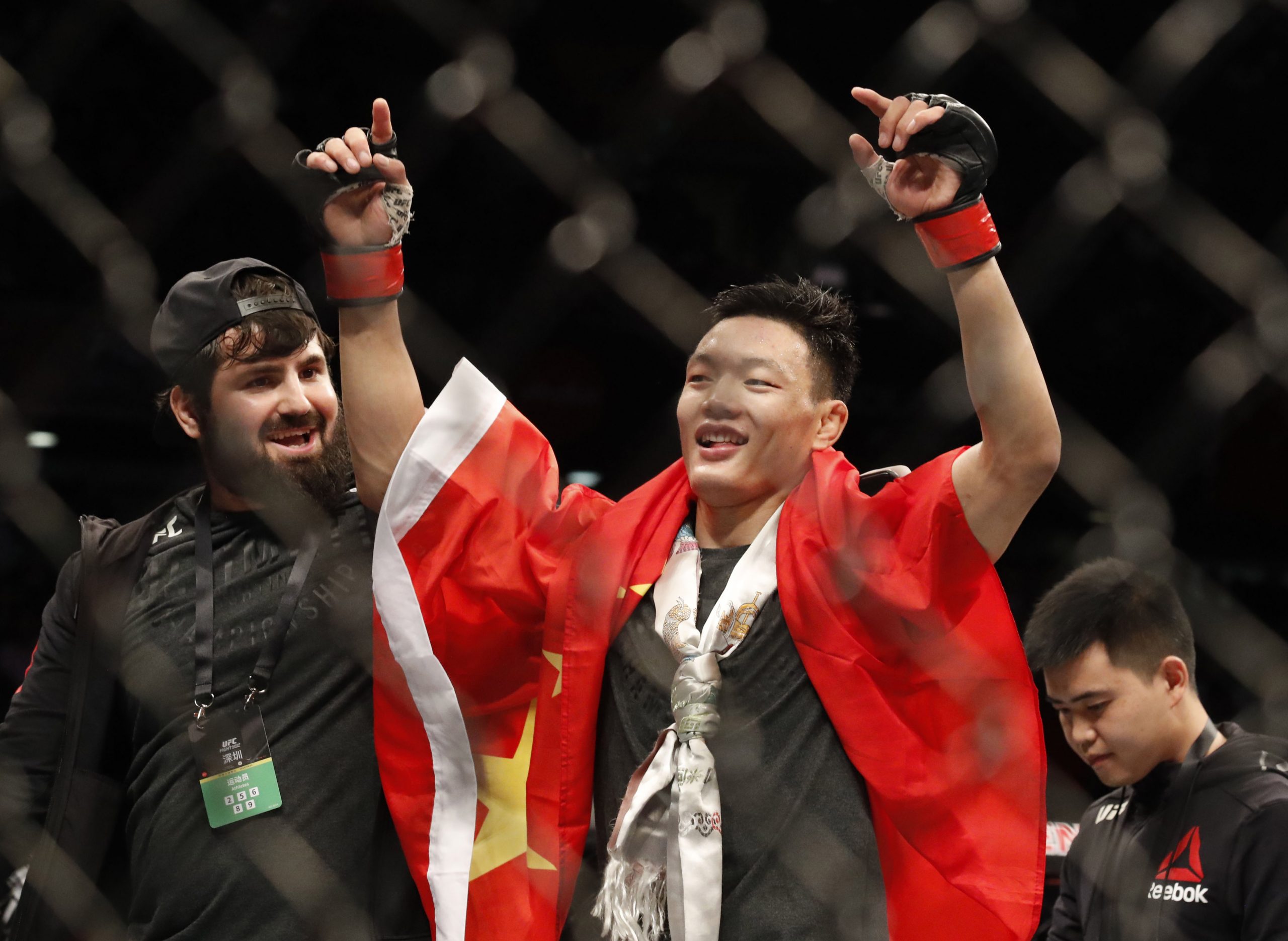 This mid-week card at UFC on ESPN 20 will feature a Welterweight fight for the Main Event. There are some huge favorites among this event, so looking for a parlay could be the best way to find the most value.

Here is our favorite four-fight parlay that pays at odds of +502. Be sure to check out the rest of our UFC on ESPN 20 predictions for the full 14-fight card.

Mounir Lazzez made his UFC debut back in July of 2020, beating Abdul Razak Alhassan by unanimous decision. This was a fight that he controlled the entire time, out striking his opponent 98-67. Lazzez is now averaging 6.53 significant strikes per minute and is landing them with an accuracy of 55 percent. He does absorb 4.47 strikes per minute, but has never been knocked out in his career. Lazzez is also showing he has very good grappling skills. So far in the UFC, he is averaging 4.00 takedowns per every 15 minutes. He is landing his takedowns with 100 percent accuracy and defending takedowns 75 percent of the time.

Warelley Alves comes into this fight with an MMA record of 13-4. He is 7-4 in the UFC and is coming off a loss by submission to Randy Brown. It is worth noting that his previous fight was back in November of 2019, so it has been quite a long time since he stepped into the Octagon. Alves is averaging 3.01 significant strikes per minute, while absorbing 3.69 strikes. He is also a decent grappler at best, averaging 1.39 takedowns per every 15 minutes and 1.0 submission attempt during the same time period. He does defend takedowns 75 percent of the time too.

Even though Lazzez has eight finishes in his career, last time out he showed he can slowly pick apart his opponent and get the win from the judges. Alves has been a little inconsistent recently, and the layoff is still concerning. Lazzez looks to be a much better overall fighter, so backing him would be my play.

Viviane Araujo is a massive favorite in this fight, and comes in 9-2 in the MMA. She is 3-1 in the UFC, winning her most fight by unanimous decision against Montana de la Rosa. Araujo is averaging 4.77 significant strikes per minute, while absorbing 5.32 strikes. She has been knocked out once, but never in the UFC. Her grappling is also very good, averaging 1.88 takedowns per every 15 minutes. More impressively, her takedown defense sits at 92 percent.

Roxanne Modafferi is no doubt an MMA veteran, entering this fight 25-18. Modafferi is averaging 3.14 significant strikes per minute, landing them with an accuracy of 31 percent. She is absorbing 4.96 strikes per minute and has never been knocked out in the UFC. Her grappling is rather unimpressive, averaging 1.55 takedowns per every 15 minutes. Her takedown accuracy is only 25 percent and she defends takedowns 36 percent of the time.

Modafferi is not worth backing here, though the price on Araujo is also far too high. Araujo is somewhat known for finishing her fights, but two of her UFC wins have come by decision. Modafferi rarely gets finished too (13 decision losses), so my play here will be Araujo to win by decision.

Tom Breese is coming off a win over KB Bhullar by TKO back in October of 2020. Breese is averaging 3.71 significant strikes per minute, while absorbing 2.68 strikes per minute. He does not have much grappling ability, but defends takedowns 75% of the time. Also, note that he has 11 finishes in his career and four in the UFC.

Omari Akhmedov most recently saw his three-fight winning streak come to an end when he lost to Chris Weidman by unanimous decision. There are some concerns about his striking as he is averaging just 2.92 significant strikes per minute. His striking accuracy is also only 34 percent. He does not take all that much damage either, just 2.69 strikes per minute. Akhmedov’s grappling ability is more telling as he is averaging 2.56 takedowns per every 15 minutes. He lands his takedowns 50 percent of the time and defends them 65 percent of the time.

This is a hard fight to call because while Akhmedov looks like the better overall fighter, his lack of striking is concerning. Breese has shown plenty of ability to stop the takedowns, which is likely going to be the difference here.

Su Mudaerji is the heavy favorite entering this fight and is 13-4 in the MMA. He is 2-1 in the UFC and just won his most recent fight. This was a win by KO against Malcolm Gordon and came back in November of 2020. Mudaerji is averaging 5.25 significant strikes per minute and is landing them with an accuracy of 58 percent. He only absorbs 2.41 strikes and has a striking defense of 60 percent. Mudaerji does only average 0.66 takedowns per every 15 minutes, but lands them with 100 percent accuracy. More impressively, he averages 1.3 submission attempts per every 15 minutes and defends takedowns 75 percent of the time.

Zarrukh Adashev comes into this fight 3-2 in the MMA. He is 0-1 in the UFC after losing his debut fight back in June of 2020. This was a KO loss to Tyson Nam in the first-round. Adashev is averaging 3.75 significant strikes per minute, but landing them just 33 percent of the time. He is also absorbing 3.75 strikes and has a striking defense of 33 percent. He has yet to show much grappling ability at all, so look for this fight to stay standing.

Mudaerji has looked very good since his UFC debut loss in 2018. He has plenty of knockout power too, winning by KO/TKO in 11 of his 13 wins. However, he is one of the biggest favorites on the card and there is no reason to back his money line here. Adashev was almost instantly knocked out in his last fight, so my play would be a Mudaerji win by finish.