UFC on ESPN 40 takes place on Saturday at the UFC Apex in Las Vegas, Nevada. This card features a light heavyweight fight between Thiago Santos and Jamahal Hill as the Main Event.

We are sharing our UFC on ESPN 40 best bets here, but head over to our main UFC on ESPN 40 predictions for picks for each fight on the main and preliminary card. Let’s get into our best bets for Saturday’s card.

Vicente Luque is the heavy favorite in this fight, but Geoff Neal should not be counted out due to his strong striking. Neal has seen 12 of his 18 fights end inside the distance, while Luque has seen 21 of his 29 fights do the same, which includes 4 of his last 5 fights in the UFC. Combined they have just 3 losses by finish, but with both guys having solid striking, backing this fight to end inside the distance will be the play.

Serghei Spivac vs Augusto Sakai: Fight to end by KO/TKO (+110)

Serghei Spivak is a heavy favorite in this fight, but Augusto Sakai does have plenty of power to make this a fight that could really go either way. This fight is more likely to end by KO/TKO seeing that Spivac has seen 8 fights end by this method in his career out of 17 fights. Sakai has seen 14 of his 20 career fights end by KO/TKO, including 4 of his last 5 fights and 7 of his last 10. He has also never lost by submission, which has also been a strength for Spivac, therefore backing this fight to end by KO/TKO will be the play.

Terrance McKinney comes into this fight with an MMA record of 12-4. He is 2-2 in the UFC, most recently losing to Drew Dober by KO/TKO back in March of this year. McKinney is averaging 4.11 significant strikes per minute and has a striking accuracy of 59%. He is absorbing 1.77 strikes and has a striking defense of 56%. His grappling has been elite so far in the UFC, averaging 4.84 takedowns per every 15 minutes and 1.2 submission attempts during the same time period. His takedown accuracy is 44% and he has a takedown defense of 100%.

McKinney is the biggest favorite on this card and even though he looks to be the right side, his price is much too high to consider backing. He has won all 12 of his fights by finish, including 7 by KO/TKO. Even though Gonzalez has just 1 loss by KO/TKO, that was his most recent loss and he has not lost by submission since 2018. Because McKinney has superior striking and Gonzalez was unable to limit any of the damage against him in his UFC debut, backing McKinney to win by KO/TKO will be the play. 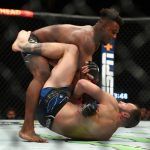