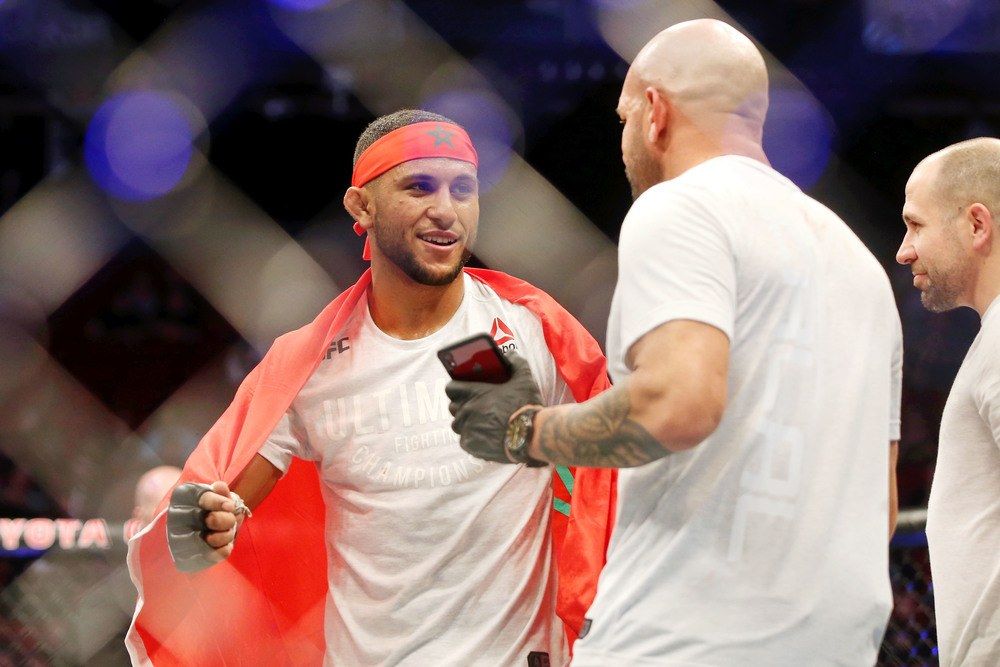 Matthew has been with Pickswise for a while now, covering a wide variety of sports. His main passions are college football and UFC, and those are the sports he has covered the most. Matthew uses a variety of methods to handicap games, including stats, trends, injuries, and situational factors. His goal is to consistently give out winners and will put in the research to try and achieve this.
@Sixfigurematt
Updated: 15:56 PM ET August 07, 2020

This week the Main Event at UFC Fight Night 174 will feature two veteran Heavyweights looking to make their case for the title. There are some huge favorites among this event, so looking for a parlay could be the best way to find the most value.

Here is our favorite three-fight parlay that pays at odds of +131. Be sure to check out the rest of our UFC Fight Night 174 predictions for the full 12-fight card.

Youssef Zalal has earned himself one of the biggest favorites of the night as he comes in 9-2 in the MMA and 2-0 in the UFC. He most recently won his fight at UFC on ESPN 12, an unanimous decision win over Jordan Griffin. Zalal pretty much dominated this fight, out-striking Griffin 59 to 28. He has been a decent striker, averaging 3.00 significant strikes per minute. More impressively, Zalal absorbs just 1.33 strikes per minute, so very little damage comes his way. He also averages 3.00 takedowns per every 15 minutes, but landing at an accuracy of 42%. Do note that his takedown defense is 66%, so he can defend them at a high level.

Peter Barrett will be making his UFC debut in this fight, having posted an MMA record of 11-3. He is averaging 7.27 significant strikes per minute, but absorbing 5.00 strikes per minute. His takedowns are also relevant, averaging 4.00 per every 15 minutes, but only at 25% accuracy. In the end, Zalal’s ability to limit damage taken has me looking his way.

If you remember seeing Kevin Holland on last week’s card, you would be correct. He was scheduled to fight Trevin Giles, but right before fight time, Giles fainted in the backstage area and the fight was called off. Now Holland will get his chance to impress again as he goes up against a guy making his UFC debut. Holland’s last fight was a TKO win over Anthony Hernandez at UFC on ESPN 8 back in May of this year. We know he is a pure striker, averaging 4.29 significant strikes per minute, an absorbing 2.56 strikes. He can also fight on the ground, averaging 1.26 takedowns per every 15 minutes and 1.1 submission attempts during the same time period. Holland has finished 14 of his 17 wins, so I do not see him losing this fight.

Beneil Dariush is the #14 contender in the division, coming in with an MMA record of 18-4-1. He is 12-4 in the UFC, having won his last four fights in a row. His last fight was in March of this year, a knockout win over Drakkar Klose. He now has seven finishes in the UFC, two by KO/TKO and five by submission. His striking has been good, averaging 3.87 significant strikes per minute, while absorbing 2.65 strikes per minute. He can also fight on the ground where he averages 1.8 takedowns every 15 minutes and 1.1 submission attempts during the same time period. His takedown accuracy is lacking, sitting at 33%, but his takedown defense is 80%. Dariush has finished his last three fights in a row, so another win here looks to be a pretty safe bet.