Why the Los Angeles Chargers need to fire Anthony Lynn 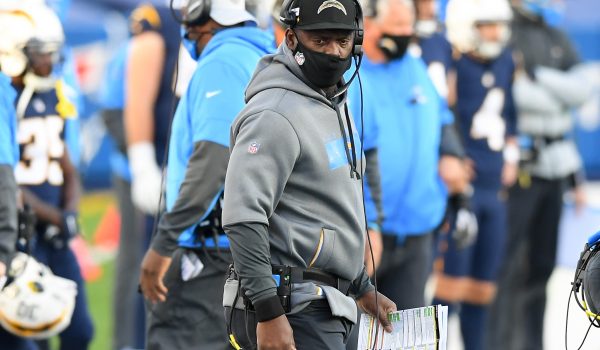 The time has come for Anthony Lynn’s run leading the Los Angeles Chargers to come to an end. Lynn has had the better part of four seasons to make his case now, and it’s been clear every step of the way that he’s in over his head. Now in his fourth year as head coach he’s shown remarkably little progress in key areas, and general manager Tom Telesco needs to pull the trigger.

It’s crucial the Chargers don’t end up wasting Justin Herbert’s career like they did Philip Rivers’. Herbert has proven to be a transcendent talent, and yet the Chargers sit at 3-8 entering Week 13. Underperformance relative to talent has been a staple of Lynn’s tenure in Los Angeles. Every year the Chargers have one of the league’s most talented rosters on paper, and every year they underachieve.

Justin Herbert should be expecting a "random drug test" after this whale of a throw 😳pic.twitter.com/hQCvSg0gYf

There have been plenty of bad breaks that aren’t Lynn’s fault, like the offseason injury to Derwin James this year for example. But even without James, the defense features Pro Bowlers like Joey Bosa, Melvin Ingram, Casey Hayward, Linval Joseph, Chris Harris Jr., etc.

Somehow despite all that, the defense has been mediocre at best. Another staple of Lynn’s reign has been repeated large blown leads. Already this year the Chargers have lost three games where they led by 16 or more points. That’s an indictment of the culture in the building, the one thing a ‘leader of men’ type coach like Lynn is supposed to be good at.

Many sportsbooks are offering odds on the next coach to be fired, and let’s take a quick peek:

It’s already been reported that Marrone is safe until the end of the season, so I certainly wouldn’t bet on him. Gase probably would’ve been fired already if the Jets were going to make an in-season move as well. Lynn at +300 could be a decent bet, especially if they lose in embarrassing fashion like they did on Sunday, but Telesco is a cautious GM who probably wants to wait until the end of the year as well.

Speaking of that loss to the Bills this past week, Buffalo doesn’t even begin to describe it. The clock management from Lynn was incomprehensibly bad, and he made some mind-boggling decisions throughout the course of the game. Los Angeles has invented new ways to lose the past few years, and many of them are due to sloppy mental errors which can be chalked up to coaching.

The Chargers have lost in their trip to Denver each of the last two seasons, each because of boneheaded last-second pass interference penalties. The team just never seems to learn anything from their mental miscues, and the buck stops with Lynn. The fact of the matter is that Lynn is neither an offensive or defensive schematic guru, and if he isn’t going to instill a positive culture in the team then he offers no value whatsoever.

To ensure Herbert has the career he has the potential for, Telesco needs to pair him with a strong offensive mind like Kansas City’s Eric Bieniemy or Carolina’s Joe Brady. He needs to do it sooner rather than later, and stop this losing mentality the team has developed before it’s too late. This roster is stacked at every level, it just needs the right coach to unlock it.