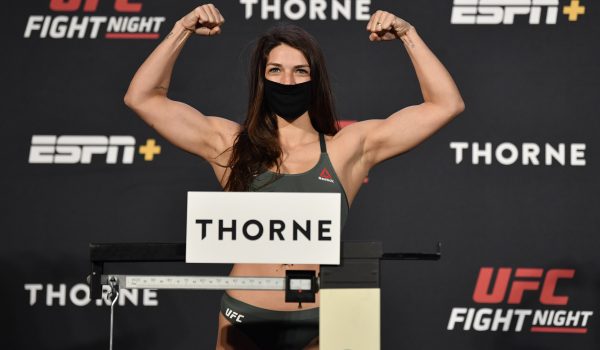 The second fight on the Main Card at UFC on ABC 2 will see Nina Ansaroff take on Mackenzie Dern. This will be a fight in the UFC Women’s Strawweight division. Dern comes into this fight with an MMA record of 10-1. She is 5-1 in the UFC and has won three fights in a row. The most recent coming against Virna Jandiroba by unanimous decision. This fight was back in December of 2020. Dern is averaging 3.74 significant strikes per minute and has a striking accuracy of only 38 percent. She does absorb 3.81 strikes, but has a striking defense of 61 percent. Now her takedowns are not very strong, averaging just 0.28 per every 15 minutes. She even has a takedown accuracy of only five percent. However, if this fight does go to the ground, Ansaroff could be in trouble. Dern is averaging 2.2 submission attempts per every 15 minutes and could easily win this one by submission as well.

Ansaroff comes into this fight with an MMA record of 10-6. She is a bit inconsistent, posting a UFC record of 4-3. Her last fight was back in June of 2019 as well, so there is sure to be rust here. Ansaroff is averaging 4.81 significant strikes per minute and has a striking accuracy of 47 percent. She is absorbing 3.55 strikes per minute and has a striking defense of 54 percent. Her grappling also is not very strong, averaging 0.29 takedowns per every 15 minutes. Her takedowns defense is 77 percent though, which should help her in this fight.

Even though Dern has not been great in the takedown department, the long layoff for Ansaroff is certainly a concern. Dern still has plenty of ability to win by submission and I do believe her striking has improved. For that reason, I will back Dern to pull off the small upset.