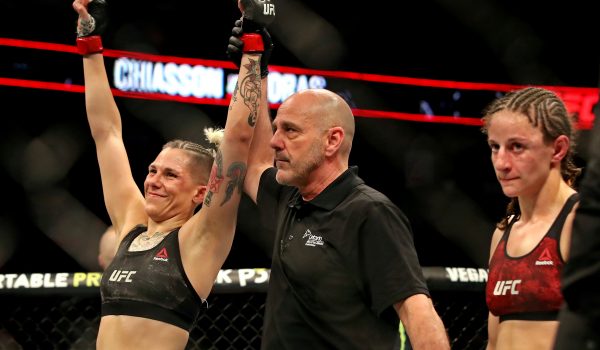 The Co-Main Event at UFC on ESPN 27 will see Aspen Ladd take on Macy Chiasson. This will be a fight in the UFC Women’s Bantamweight division. Ladd comes into this fight with an MMA record of 9-1. She is 4-1 in the UFC, most recently beating Yana Kunitskaya by TKO/KO back in December of 2019. She is averaging 5.22 significant strikes per minute and has a striking accuracy of 55 percent. She is absorbing 4.84 strikes and has a striking defense of 46 percent. Her grappling has been great, averaging 2.45 takedowns per every 15 minutes and 1.2 submission attempts during the same time period. Her takedown accuracy is 75 percent and her takedown defense is 66 percent.

Chiasson comes into this fight with an MMA record of 8-1. She is 5-1 in the UFC, most recently beating Marion Reneau by unanimous decision back in March of this year. She is averaging 4.16 significant strikes per minute and has a striking accuracy of 49 percent. She is absorbing 2.17 strikes and has a striking defense of 46 percent. Her grappling is decent at best, averaging 0.98 takedowns per every 15 minutes. The main concern here is her takedown accuracy, which sits at 21 percent, while her takedown defense is 64 percent.

Ladd has had a bit of a layoff, but she looks to be the right side here. She is very balanced and can use her grappling to control this fight. The price is still a little high, but I would look to a Ladd win and would also consider using her in a parlay.

UFC 2 days ago
Best sportsbook promotions and odds boosts for Saturday: UFC, MLB and the Olympics