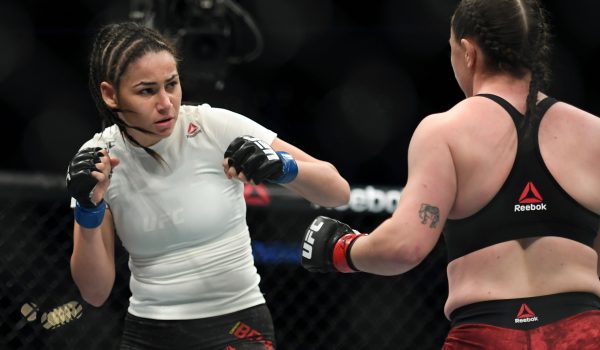 The first fight at UFC on ESPN 27 will see Hannah Goldy take on Diana Belbita. This will be a fight in the UFC Women’s Strawweight division. Goldy comes into this fight with an MMA record of 5-1. She is 1-1 in the UFC, most recently losing to Miranda Granger by unanimous decision back in August of 2019. Goldy is averaging 6.53 significant strikes per minute and has a striking accuracy of 46 percent. She is absorbing 3.90 strikes and has a striking defense of 55 percent. Her grappling has yet to make a real impact in her fights, but she is defending them 66 percent of the time.

Belbita comes into this fight with an MMA record of 13-6. She is 0-2 in the UFC, most recently losing to Liana Jojua by submission back in July of 2020. Belbita is averaging 5.81 significant strikes per minute and has a striking accuracy of 39 percent. She is absorbing 6.49 strikes and has a striking defense of 52 percent. Her grappling certainly could be a factor here as she is averaging 1.69 takedowns per every 15 minutes. Her takedown accuracy is 66 percent and her takedown defense is 64 percent.

Despite the long layoff for Goldy, I still like her in this fight. She lands her strikes at a much higher percentage and has much more volume. Plus, despite a decent takedown defense, Belbita has looked uncomfortable on the ground and as mentioned, has lost by submission. For that reason, I will look to back Goldy.