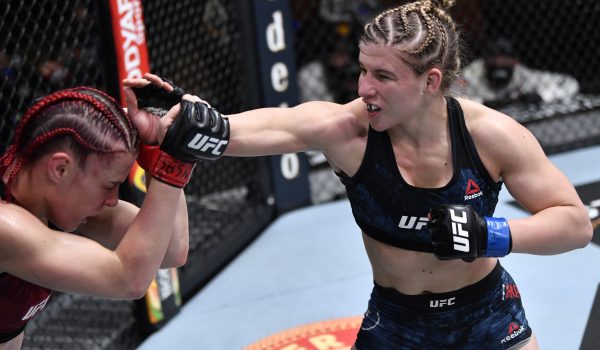 The second fight on the Main Card at UFC on ESPN 27 will see Miranda Maverick take on Maycee Barber. This will be a fight in the UFC Women’s Flyweight division. Maverick comes into this fight with an MMA record of 11-2. She is 2-0 in the UFC, most recently beating Gillian Robertson by unanimous decision back in March of this year. Maverick is averaging 6.00 significant strikes per minute and has a striking accuracy of 48 percent. She is absorbing 2.85 strikes and has a striking defense of 61 percent. Her grappling has also been elite thus far, averaging 2.25 takedowns per every 15 minutes. Maverick has a takedown accuracy of 75 percent and a takedown defense of 50 percent through two fights in the UFC.

Barber comes into this fight with an MMA record of 8-2. She is 4-2 in the UFC, having lost back to back fights. The most recent of these losses was a unanimous decision loss to Alexa Grasso back in February of this year. Barber is averaging 5.21 significant strikes per minute and has a striking accuracy of 52 percent. She is absorbing 3.00 strikes and has a striking defense of 50 percent. Her grappling is solid as well, averaging 1.44 takedowns per every 15 minutes. Her takedown accuracy is 40 percent, but her takedown defense is 80 percent.

While both ladies have been impressive so far in the promotion, Maverick looks to be a little more balanced. Barber certainly has the power to win this fight inside the distance, but the grappling advantage for Maverick is the reason why I like her to win this fight.