HomeAnalysisNFL AnalysisFive 2022 NFL Draft prospects to look out for: Sky's the limit for Matt Corral 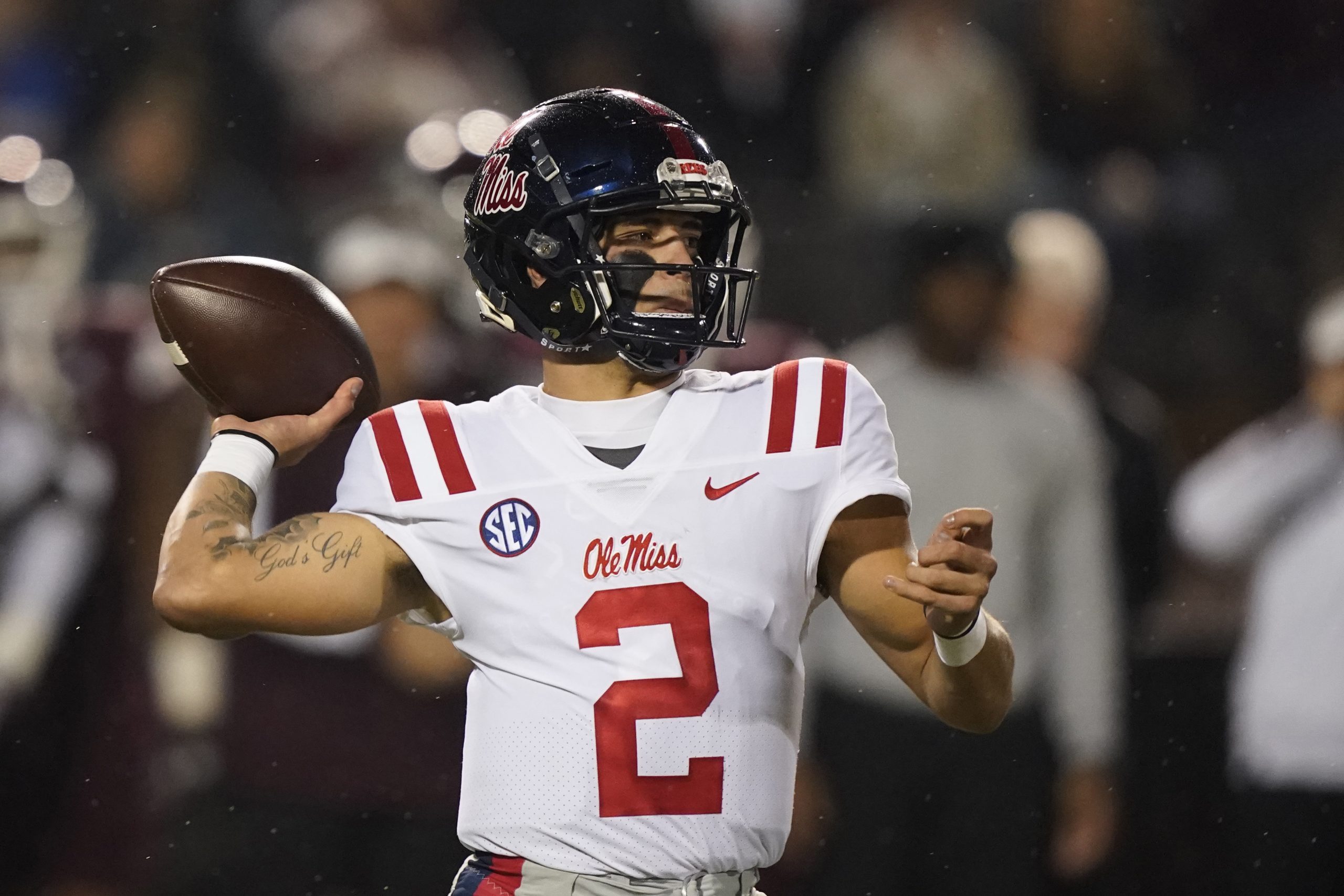 The 2021 NFL regular season is in the books. We’ve still got a great postseason stretch to look forward to, and we’ll of course be bringing you free picks on the side and total of every game. This time of year is always a bit sad as things wind down, but fortunately this year’s offseason should still bring plenty of excitement.

As soon as the Super Bowl is over, the combine, free agency and the draft will be right around the corner. With that in mind, we thought we’d take an early look at the 2022 NFL Draft. There will be plenty of betting opportunities when the draft rolls around, and we’ll definitely have tons of draft prop bet content, but right now let’s just talk about some prospects. Here are five guys to keep an eye on as the process heats up, with a couple big names and a couple of sleepers:

Let’s start things off with a quarterback. It’s certainly not the best, but this is one of the most interesting quarterback classes in years. What makes it so interesting is that none of the passers seem like sure things, and there’s plenty of disagreement about how they should be ranked. Usually, there’s a clear top one or two signal-callers. But for the 2022 NFL Draft, nobody has any idea how the QB pecking order is going to shakeout. Corral, Sam Howell (UNC), Kenny Pickett (Pitt), Malik Willis (Liberty), Desmond Ridder (Cincinnati) and Carson Strong (Nevada) seem to be the clear top six.

But they’re all kind of just jumbled together, and at this point there’s zero certainty about in which order they go. To me, Corral is the most intriguing. Corral has led a dynamic passing attack at Ole Miss the last couple of years, but how much of that was just due to playing in Lane Kiffin’s system? I see a lot of variance here, which is why I can’t wait to see how his pre-draft process plays out. Corral also just suffered a potentially significant ankle injury in the Sugar Bowl, adding another complicated wrinkle. There’s going to be a lot to monitor here.

It’s also not a super great year for running backs in my opinion. But one prospect immediately rises to the top, and that’s Walker from Michigan State. He’s a fun prospect because unlike a bunch of the other top guys, he wasn’t too widely known before this season. Relatively unknown in the ACC with Wake Forest, Walker transferred to MSU this past year and announced his presence right away. He finished with 1,636 yards while averaging 6.2 yards per carry and scoring 18 touchdowns. Walker didn’t do much as a receiver, catching only 13 passes for 89 yards, so he could use some work there. I’ll be very interested to see how he tests at the combine, and how he progresses as a pass-catcher once he reaches the pros.

Most of the attention at the top of the draft right now is going to pass-rushers Aidan Hutchinson and Kayvon Thibodeaux. But Neal is probably going to go right behind them, and he’s worth getting to know. The 6’7 350-pound mauler has been a stud for Alabama, and many analysts think he’s got a good shot to go third overall. Despite that, he isn’t getting nearly as much mainstream media attention. Neal could even end up being the first overall pick, since offensive line is certainly a concern for the Jaguars. Don’t be shocked if you hear Roger Goodell calling the former five-star recruit’s name before anyone else come April.

Now let’s talk about some guys who are flying more under the radar. Pierce only had two catches in Cincinnati’s College Football Playoff loss to Alabama, but don’t let that fool you. Quite simply, he’s an athletic freak. Pierce is going to blow up the combine, and after that I expect him to shoot up draft boards. He exploded for 884 yards and eight touchdowns this past year, and had a meteoric rise at Cincinnati after initially not contributing much as a freshman. Most people seem to expect him to be a Day 3 pick at this point, but I won’t be at all surprised if he ends up on Day 2.

Let’s not kid ourselves. Even if it’s a weak class, the most fun part of any NFL Draft is evaluating and following the quarterbacks. And when we look past the initial top-tier, Zappe is the one who jumps out to me. Talk about a guy who came out of nowhere. Zappe spent his first four seasons at FCS school Houston Baptist before transferring to WKU for this past season. And how did he do in his first year at the highest level? Oh nothing too crazy, he just set the FBS records for passing yards and touchdown passes. Say what you will about his size or level of competition, it’s hard to argue with 62 touchdowns and nearly 6,000 yards. Zappe also has the potential to rise up to Day 2 of the draft, and he’s hard not to root for. He’s definitely my favorite of the lower-profile quarterbacks.