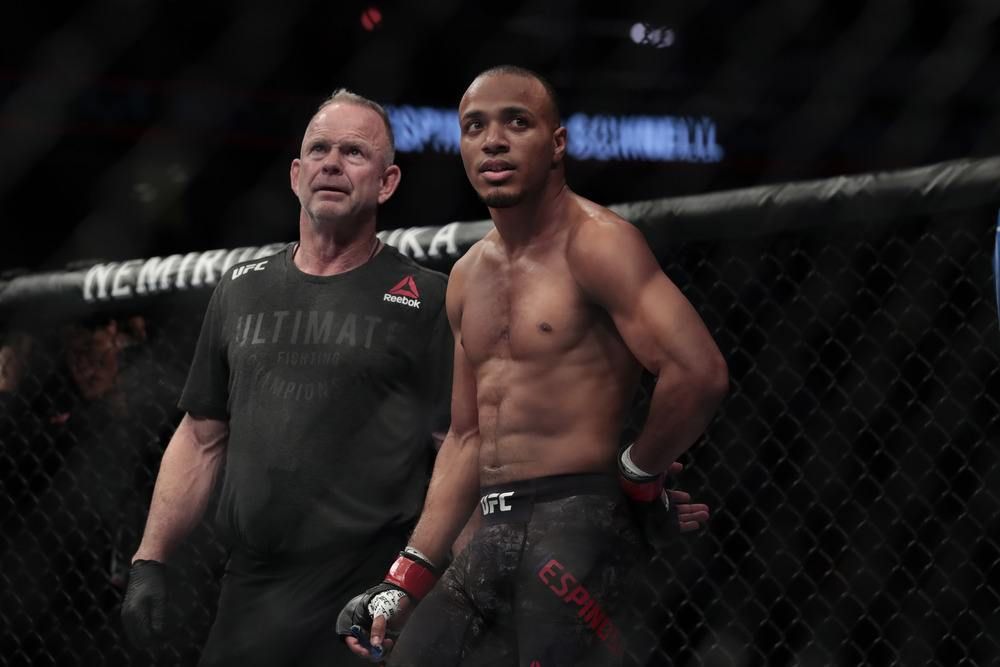 Since graduating from Davidson (The College That Stephen Curry Built), I have been writing about sports--just about any and all you can think of!--and coaching tennis in Atlanta, Ga. Beyond the four major sports, I am an avid tennis fan and cover the ATP Tour on a daily basis. If I'm not busy writing, you can generally find me on a tennis court or traveling the world wherever a sporting event takes me.
@Dimonator133
Updated: 19:31 PM ET June 12, 2020

The coronavirus hardly made an impact on the UFC and there is certainly no stopping mixed martial arts action now. The next installment of ultimate fighting will take place in the form of UFC Fight Night 172 on Saturday in Las Vegas. In addition to our best bets here, be sure to check out all of our UFC Fight Night expert picks.

Heading into this UFC bantamweight division fight, Espinosa comes in with a professional MMA record of 14-7. Despite being submitted in two consecutive tussles, Espinosa has a take-down defense of 83 percent. He should be able to defend himself well enough against De La Rosa, who is not known for wielding significant knockout power. Having won by KO or TKO only once in his entire career, De La Rosa will look to take this fight to the ground. His modest 2-4 lifetime UFC record suggests that any plan he implements may not work at Espinosa’s expense. De La Rosa is currently mired in a three-match UFC losing streak and you should not be surprised if the skid hits four.

There is good value on the underdog in this UFC featherweight division fight. Jourdain is a novice when it comes to the UFC, sporting a 1-1 lifetime record. However, he is 10-2 overall in his MMA career and coming off a TKO of Doo Ho Choi. All 10 of his victories have come by either knockout (seven) or submission (three), leaving nothing to decisions. Fili is a mediocre 8-6 lifetime in his UFC tenure and lost his most recent contest at UFC 248.

Dvalishvili is a massive -770 favorite in this catchweight fight, but it could be more competitive than expected. Lopez is making his UFC debut, a last minute replacement for Ray Borg (family emergency). It is hard to see Lopez winning this one, but at the same time he is coming off a three-match MMA winning streak. He will not be a pushover for Dvalishvili, who generally fails to knock opponents out. Dvalishvili is on a three-match UFC winning streak and all three victories have come by decision.

This women’s flyweight division showdown is a pick ‘em, with both fighters priced at -110. Calvillo may be less experienced, but she has finished five fights in her career (three by knockout, two by submission). As for Eye, she has finished only four of her 22 fights (15-7 record). Calvillo lands an average of 4.12 significant strikes per minute, compared to Eye’s 3.79. Calvillo also logs 1.83 take-downs per 15 minutes with a take-down accuracy of 43 percent. Go with the more well-rounder, more powerful fighter.

How about one more upset pick? At +180 in the final preliminary fight of the night (women’s flyweight division), there is strong value on Cifers. She is a respectable 10-5 lifetime in MMA (2-3 UFC) and has finished five contests in her career by either KO or TKO. Agapova, meanwhile, is making her UFC debut. She is not much of powerful striker and it is worth noting that she had been preparing to face Melissa Gatto, but Gatto was sidelined by visa issues and replaced by Cifers.