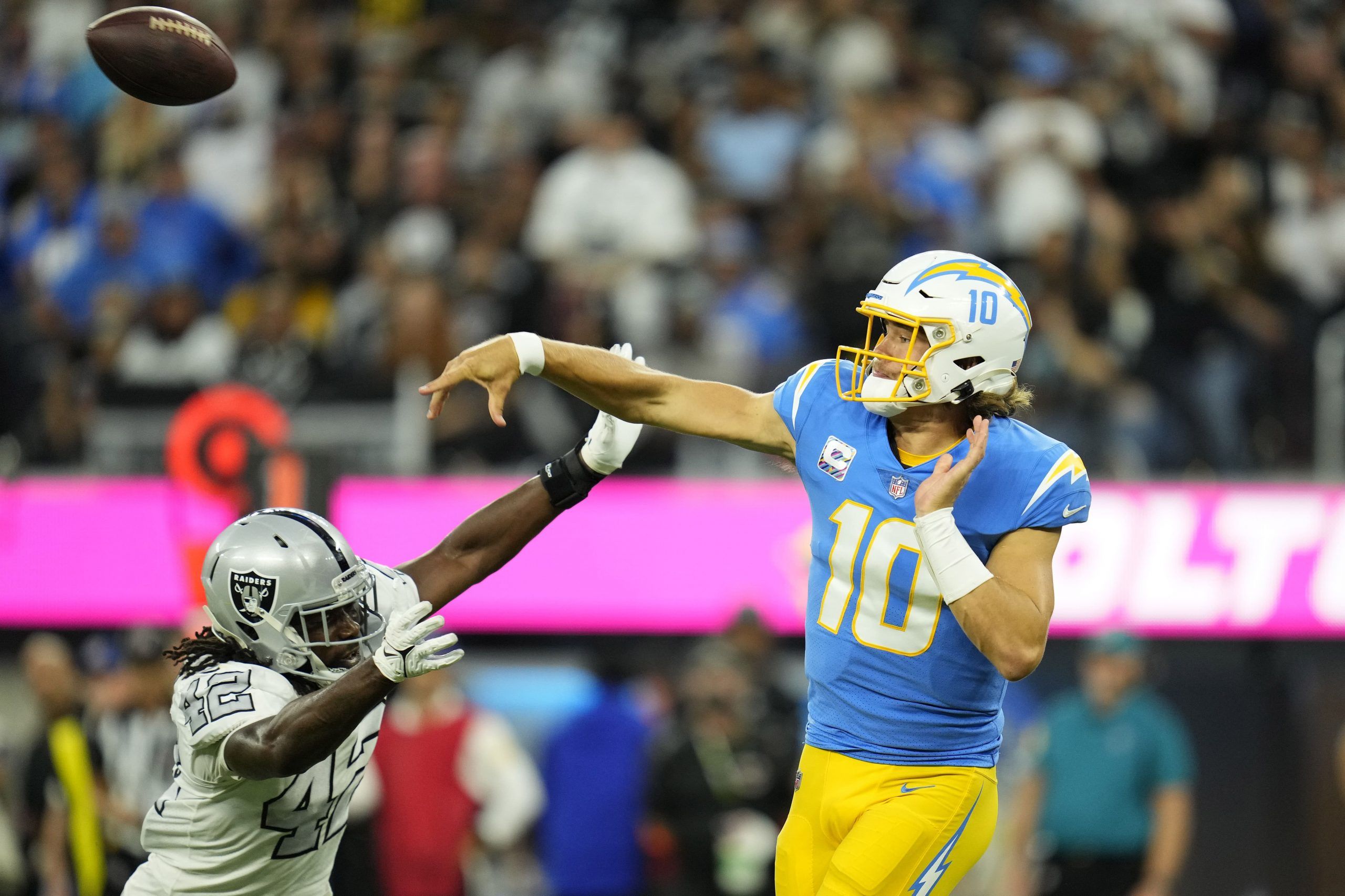 The 1pm NFL slate this week is the meat and potatoes of any player prop card. It has the most matchups and will likely dictate how our day performs overall. I spent 5 hours today reviewing the lines for just the 1pm slate and narrowed down the plays I feel most confident in. Sunday morning for most books opens up a lot of “alternate lines” on rushing, receiving, and passing yards. If higher odds and parlays are your cup of tea, feel free to play alt lines on my overs. However, I’m here to be as responsible as possible. Check back in on Sunday morning for any late additions!

Broken ribs have not impacted Herbert’s ability to push the ball downfield as he’s hit this mark in every game this season. The Browns are middle of the pack in coverage and dead last in the league in tackling according to PFF. Cleveland has managed to give up this line to Joe Flacco, Marcus Mariota and twice to Baker Mayfield. Only Mitch Trubisky could not hit this mark against the Browns, and he came very close at 36 yards to George Pickens. Myles Garrett could return this week, but Jadaveon Clowney could miss another week. Last year against the Browns, Herbert had a 72-yard completion to go along with completions of 37 and 29. This number is in play every time Herbert drops back on Sunday. It’s a 1.5U play from me.

Burkhead has hit this in 3 of 4 games this season and still has a role on passing downs with the emergence of rookie Dameon Pierce. Burkhead has seen 5+ targets in 3 of the 4 games this season, with the low-scoring game against the Broncos being the exception. The Jaguars allow the 3rd-most receptions per game to opposing running backs and 2nd-most receiving yards per game to opposing RBs. I can see a negative game script also helping this line, as the Jags are 7-point favorites coming back home off a tough road loss to the Eagles. I may not have many Rex Burkhead plays this season, but this is one I feel good about. 1U on Burkhead, playable up to 22.5.

Wilson has hit this in 3 of 4 games this season but missed it with the solo start of QB Zach Wilson. Garrett Wilson still saw 6 targets and finished with 2 receptions for 41 yards. He also had a drop to his name that would have likely pushed him over this line. The Dolphins ran man coverage 57% of the time last week (#1 in NFL) against the Bengals and it did not end well.

Garrett Wilson leads the NFL in success rate against man single coverage this season, so I believe he could be in line for a big game. It helps that he is a big play waiting to happen. Wilson has had receptions of 19, 31, 23 and 35 in 4 games. I expect Zach Wilson to make it a point to find him and possibly pull off an upset at home. 1U from me, playable up to 48.5.

It’s October, so that means it’s “Scary Terry” season. The Commanders will be missing rookie Jahan Dotson and Curtis Samuel could be a last-minute scratch as he did not practice on Wednesday. McLaurin could be in line for a big day, as the Titans give up the 4th-most YPG and 8th-most receptions per game to opposing wideouts. McLaurin’s aDOT is 15.5 on the season and has seen 8+ targets of 20 yards or more this season. Curtis Samuel is #1 on the team with a 23% target share, but McLaurin is right behind him at 16%. Dotson’s injury should get McLaurin to 8 targets at a minimum. For his career, McLaurin’s hit this in 20/23 games when he gets that mark. 1.5U from me. If you’re looking for an alt-line play this Sunday for juicier odds, McLaurin is your guy.