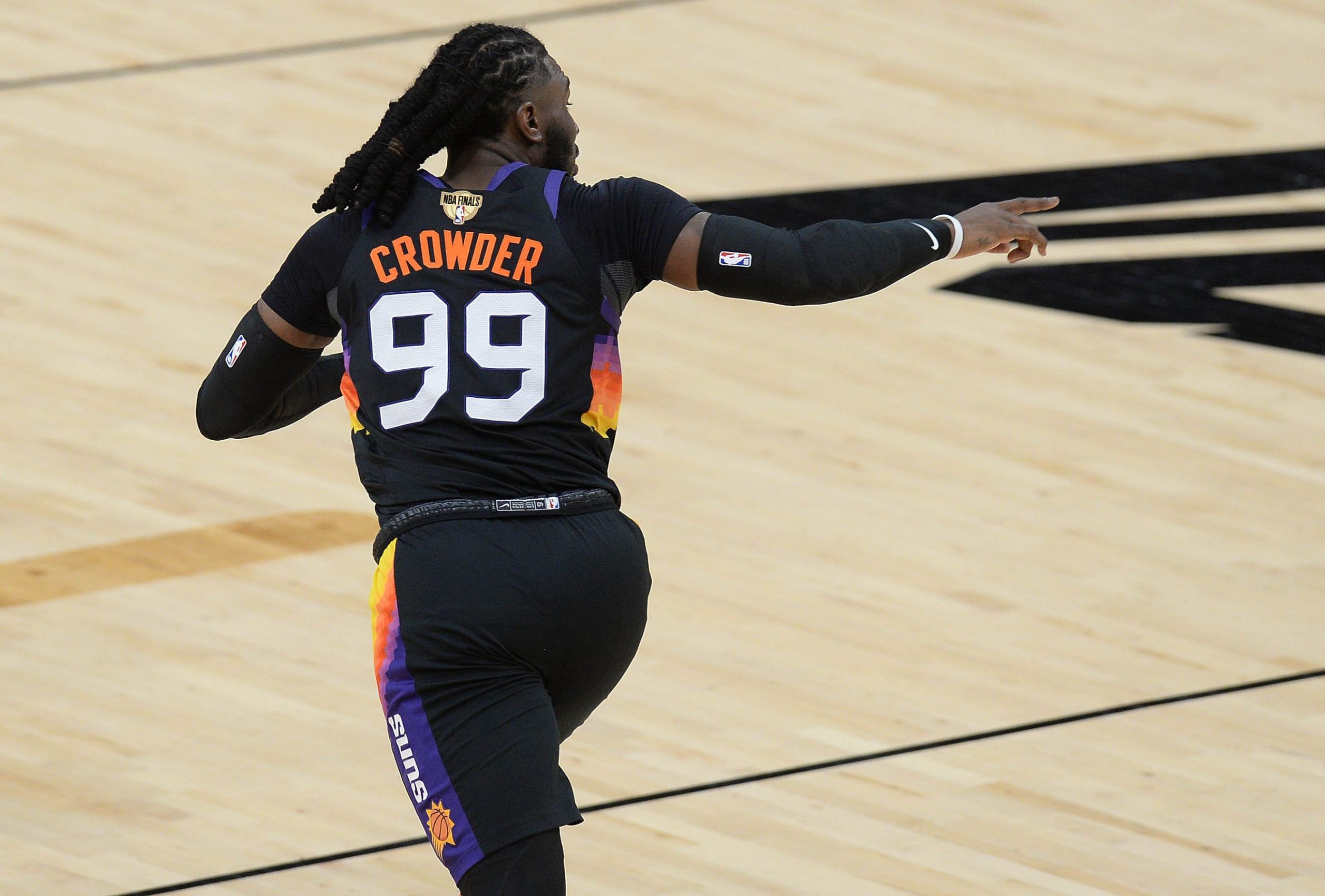 More commonly known as @PropBetGuy on Twitter, Doug Carter has been crunching the numbers on player props for years. He's also a staunch defender of future Hall of Famer, Eli Manning.
@PropBetGuy
Updated: 11:58 AM ET July 14, 2021

The NBA Finals continue tonight with Game 4 in Milwaukee. After the Bucks prevailed in a crucial Game 3 matchup, they’ll look to once again defend homecourt and knot up the series. Before we dive into player props, make sure to consult how our experts are picking tonight’s game if you’re looking to bet sides and totals.

We’ve seen plenty of ebbs and flows already within this series. Game 4 represents a pivotal point in the series, and I’m expecting a closer game than we saw in Game 3. With that, my two best player props of the night are both combo bets on players I expect to be heavily involved in the action.

After playing over 2.5 three-pointers made in Game 1, Crowder left me high and dry with his 1 point performance. In the two games since, he’s scored 29 points on a blistering 9-12 from behind the arc. While losing that first bet is never fun, it reinforces a lot of the themes I wrote about with the Suns forward in this matchup. Mainly, he’s going to have his opportunities to make a bunch of threes.

A total of 64% of Crowder’s three-point attempts in this series have been considered open, which is roughly on par with his regular-season average. The Bucks are utilizing either Giannis Antetokounmpo or Bobby Portis on Crowder, both of whom are keener to help out in the paint than contest shots behind the arc. While it might feel risky to bet on Crowder coming off a 6-for-7 performance from three, his positive history scoring versus the Bucks reinforces the value.

As for his boards, the Marquette alum is averaging 13.7 rebound chances in the series (13, 16 and 12 in the three games). In the previous three series, Crowder failed to eclipse 9.8 rebounding chances per game. The length of the Bucks has forced the Suns’ complementary pieces to support Deandre Ayton on the glass. The results have seen Crowder grab 25 rebounds in three games thus far.

The nine-year pro is poised for another 32+ minutes in Game 4. His defensive presence has proved paramount for the Suns. And, against a Bucks team in which he’s eclipsed 18.5 PRA in 11 of his last 15 games, I love Crowder to put together another solid all-around game. I have the bruising forward projected at 21 PRA tonight.

Be sure to check out our first basket best bets, including a +1400 longshot!

This play comes down to the numbers. Middleton is averaging 13 rebounds + assists in 40 minutes per game in the playoffs thus far, and has hit the over on this line in 12 of 20 games (60%). His regular-season average, on a per 40 minutes basis, was 13.4 R+A. So, it’s fair to say he only needs to put in an average performance to hit the over here.

And of course, the matchup has been beneficial. His rebound + assists chances per game (23.3) in the finals have exceeded his average in the three previous series. And with Giannis rounding into form, it likely helps Middleton increase his productivity in other areas. In the 11 games the Greek Freak has scored at least 30 points in this series, Middleton has beaten this line seven times. It’s no coincidence, as 26% of Middleton’s dimes this season have been to Antetokounmpo.

He’s upped his R+A production by 6% in front of his home crowd these playoffs, and I expect him to continue on that trend tonight. On my ledger, Middleton’s projection sits above 14 rebounds + assists.