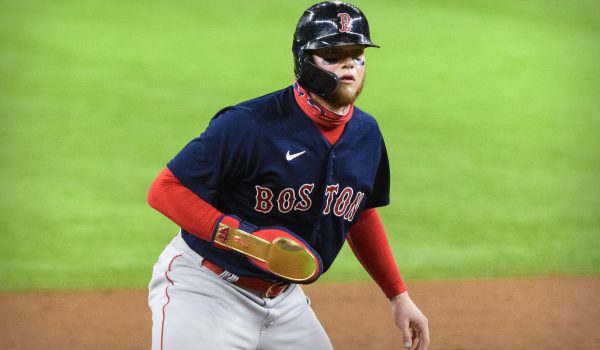 A full 15-game slate in Major League Baseball is headlined by the ESPN Sunday Night Game of the Week. And it doesn’t take a genius to figure out what it is simply by looking over the schedule. It’s none other than the most historic rivalry in this sport’s history: the Boston Red Sox vs. the New York Yankees. Needless to say, this showdown is getting the same game parlay treatment it deserves. Let’s take a look at the best such option for Sunday’s marquee attraction, and be sure to check out our full game preview for picks on the side and total.

Part of the value in same game parlays, of course, is that all of its components can be correlated if you so choose. That is the entire plan here, as Xander Bogaerts getting a couple of hits and Garrett Richards mowing down a fair share of opposing batters obviously goes well with a Boston win. Let’s break down each of the three legs one by one.

Looking to sweep the Yankees, the Red Sox send Garrett Richards to the hill against Domingo German. After winning 5-2 on Friday, the Sox came from behind in the late innings of Saturday’s contest to secure a 7-3 victory. Boston has used closer Matt Barnes two nights in a row, but he has totaled only 22 pitches so he should be available if needed in this one. The Yankees’ top two bullpen options outside of Aroldis Chapman (Chad Green and Jonathan Loaisiga) both threw 29 pitches yesterday. As for the starters, Richards has been good but not great so far in 2021. However, he faces a New York offense that ranks 18th in OPS and 25th in ISO against right-handed pitching this year. Meanwhile, German has struggled mightily against good teams. In five starts against the Blue Jays (twice), Rays (twice), and Astros, he has surrendered 15 earned runs in 22.2 innings. The Red Sox have the third-best OPS in baseball against right-handed pitching in 2021.

Bogaerts has to like his chances of success at the plate on Sunday, perhaps even multi-hit success. He is 4-for-10 lifetime against German with a double and a home run. The 28-year-old shortstop has hit safely in three consecutive contests, with a pair of base knocks in two of the three. Batting .313 for the season with 10 HRs and 33 RBIs, Bogaerts is brimming with confidence. And there should be no concern that German is right-handed. The right-handed Bogaerts is batting .320 against righties in 2021 compared to .295 vs. southpaws.

Richards is not necessarily a strikeout pitcher, but he has mowed down at least four hitters in seven straight starts—including 10 against the Mets in late April. The 33-year-old righty has worked at least 5.0 innings in seven consecutive appearances, too, and an extended outing obviously gives him a better chance of racking up Ks. Meanwhile, the Yankees have struck out 551 times this season. Six different guys have fanned at least 43 times, including Aaron Judge with 58, Giancarlo Stanton with 51, and Gio Urshela with 50.