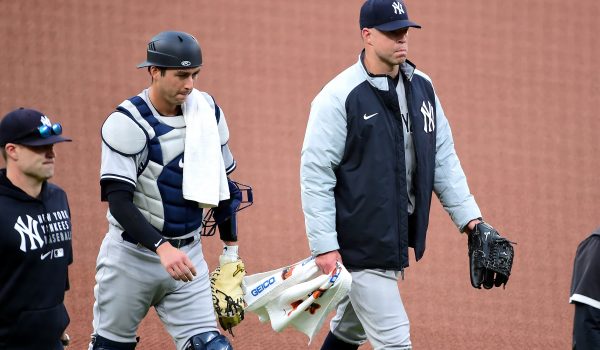 This weekend in Major League Baseball continues with a full 15-game slate on Saturday. The top two teams in the National League—West rivals San Francisco and Los Angeles—are playing bookend games. After the Giants get things started in the afternoon against the Nationals, the Dodgers will wrap things up in the nightcap against the Rangers. In between there are plenty of intriguing matchups, as well. Here is our millionaire parlay for today’s schedule.

Let’s give a quick breakdown for each of the 14 legs one by one.

The Giants have been the surprise of the season so far and they are sending Kevin Gausman to the mound for this one.

Aaron Judge and Giancarlo Stanton are heating up for the Yankees, who may have too much offense for the Phillies.

James Kaprielian is one of the Athletics’ top prospects. He along with a stellar bullpen should be able to stymie Kansas City.

The Braves have lost three in a row, all by one run the first two in heartbreaking fashion. They are due for a win, right?

Caleb Smith has been in outstanding form for the Diamondbacks, who should be able to avenge Friday’s extra-inning setback.

Rich Hill was basically unhittable in May and Tampa Bay also boasts a stout bullpen. Baltimore is going to be in trouble.

Dylan Cease is taking the mount for the White Sox, and that is reason enough to pick them to win. He positively owns the Tigers.

German Marquez is toeing the rubber for Colorado and he should have the edge against Wade Miley, who gave up eight runs on 11 hits to the Rockies in 3.0 innings on May 14.

The Pirates stink, so they should generally be faded at all costs. Facing Corbin Burnes certainly isn’t an exception.

Joe Musgrove on the hill should help the Padres get back on the track. Their bullpen is more rested than that of the Mets, as well.

The Indians were all over the Mariners’ pitching on Friday and more of the same should continue this weekend. Yusei Kikuchi has been mediocre at best for Seattle.

Boston rallied from a 5-1 deficit to prevail 6-5 via a walk-off in Friday’s contest. Nick Pivetta should help the home team maintain momentum.

Minnesota is a horrendous 25-38, one of the most disappointing teams in Major League Baseball. Houston’s Luis Garcia will likely pile on the Twins’ woes.

St. Louis squandered a 5-1 lead on Friday, losing 8-5. Chicago’s Kyle Hendricks is 6-1 in his last seven starts and should be able to record another victory.

The Dodgers have gotten into a groove, including an absolutely blowout of the Rangers on Friday. Count on Trevor Bauer keeping his team in the win column.