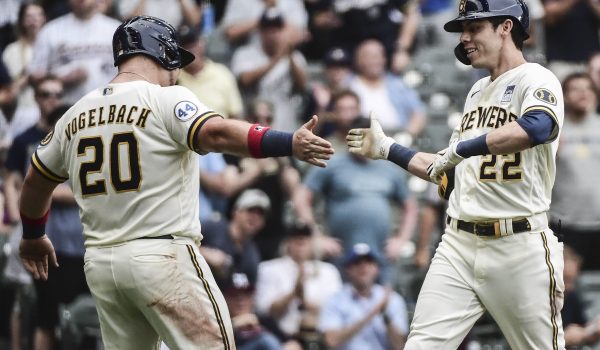 The 2021 MLB season kicked off more than two months ago now, and the action has been jam-packed. Why not celebrate the weekend by going for a big payday on Saturday? That’s right, we’re back with another MLB mega parlay, this time a three-teamer with a payout just north of 11/1, and we’re counting on the Brewers to win big.

We’re starting this mega parlay with the Yankees in the early slate. New York’s offense has really been heating up recently, and they just scored 22 in a three-game set against Minnesota. The Yankees have scored at least five in four straight games, and offensive upside is what I’m looking for when backing a team on the run line. The Yankees also have the third-lowest bullpen ERA in the league, while the Phillies are in the bottom ten.

Philly starter Vince Velasquez is mediocre at best, and he’s given up nine earned runs in only seven innings over his last two outings. Yankees starter Jameson Taillon has been better than his numbers indicate, and he’s got that elite bullpen backing him up. Bryce Harper is in an epic slump, so I don’t want any part of this Phillies lineup right now.

It’s seemingly never a bad time to fade the Pirates, so we’re rolling with the Brewers too. Milwaukee is picking up steam, and has won seven of its past eight. Each of the Brewers’ last three victories have come by at least three runs, so the alt run line doesn’t scare me much. That includes the 7-4 win they picked up in the first game of this series. The Pirates have the worst offense in baseball, so Brewers starter Corbin Burnes should be just fine.

Even if he wasn’t facing a team that’s dead-last in the league in OPS, Burnes would be just fine. He’s been thoroughly dominant this season, entering with a 1.97 ERA and absurd 0.71 WHIP. In his last outing he threw seven shutout innings while striking out 13 batters. The Brewers are heating up, while the Pirates have lost five in a row while scoring 12 total runs in those games.

To wrap this mega parlay and hopefully bring us home, we’ve got the Astros on the run line. Houston has had by far the hottest lineup in MLB recently, and there’s no reason to stop riding them. The Astros have scored at least six runs in six straight games, and they have the best OPS in the league. They’ll start Luis Garcia, and the youngster has been phenomenal. He has a 2.75 ERA through ten starts.

The Twins have been one of baseball’s biggest disappointments this season, and after a brief resurgence, they’re now 3-7 in their last ten games. Minnesota’s bullpen has been very bad, and their offense can’t keep up with the Astros’. Houston is set to roll in this nationally televised contest.