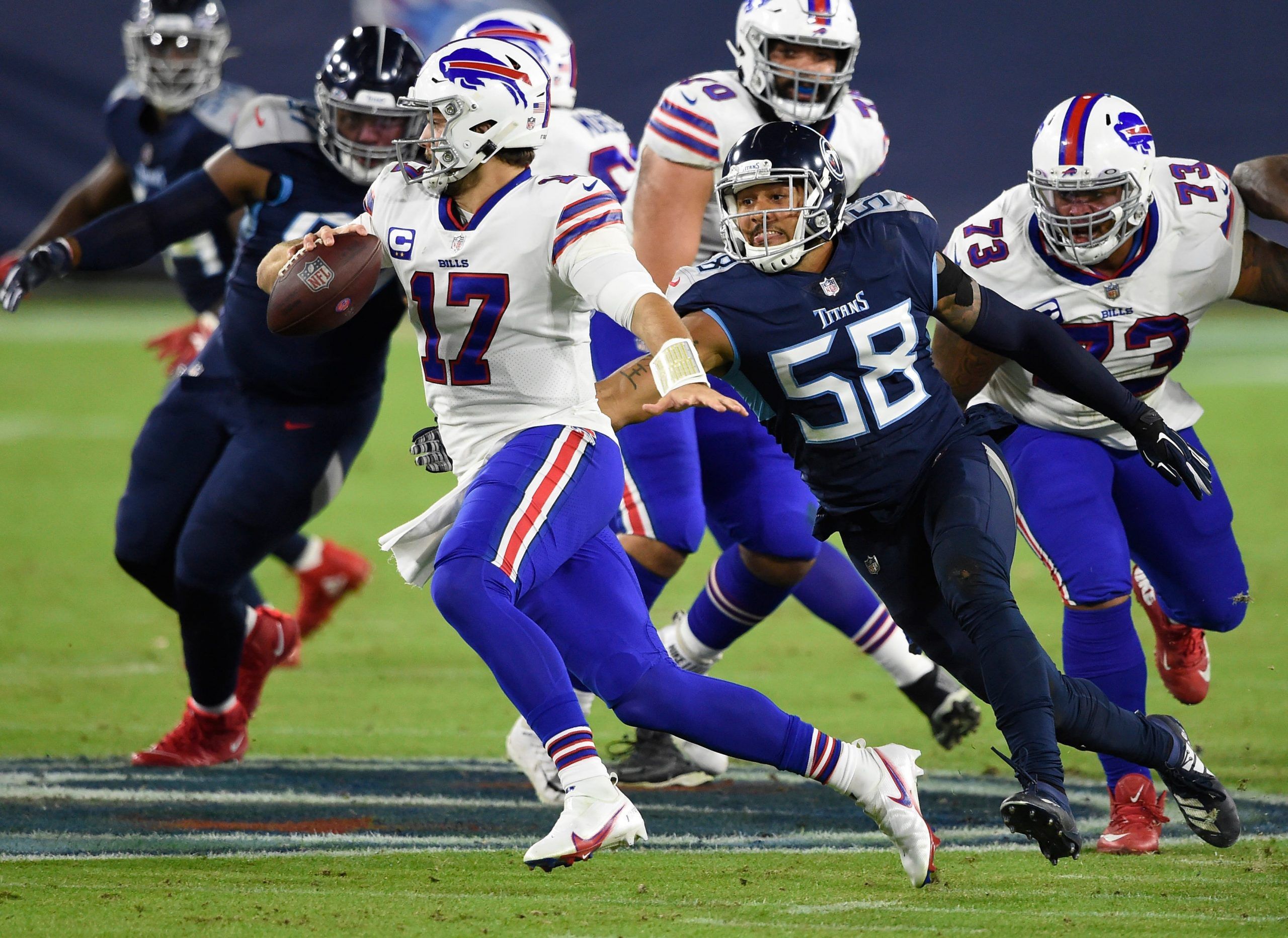 NFL betting analyst for Pickswise. I have been working in the fantasy sports industry for more than 20 years. I am the head of fantasy sports content for Fantasy Alarm and DFS Alarm as well as a bi-weekly columnist for the New York Post.
@rotobuzzguy
Published: 11:55 AM ET September 19, 2022

NFL DFS Week 2 continues with the Tennessee Titans visiting the Buffalo Bills for the first of two Monday Night Football games. We all have a very good idea as to how each team is going to game plan against the other, but when it comes to building the winning DFS lineup, you not only have to hit the right chalk, but you also have to dig deeper through their rosters to figure out where you need to get a little weird in your lineups. Getting weird doesn’t always mean throwing random darts at players completely off the radar. It’s about finding the secondary and tertiary level of players who tend to find themselves in matchups we can exploit.

Sometimes you just have to ride the chalk. Allen is the center of the Bills’ universe right now — with a thunderbolt for an arm and the ability to carry this entire offense on his shoulders, if necessary. Allen has the weaponry to succeed and his ability to extend plays with his legs and take off running on his own make him a major part of any winning DFS lineup. He will likely throw for a couple of touchdowns in this one and don’t be surprised if he runs one in himself, as well.

Offensive coordinator Ken Dorsey is taking a page out of what Kevin O’Connell did with Cooper Kupp last season, lining him up all over the field. The Titans corners may not have given up a ton of receiving yards to the Giants last week, but they also didn’t do a very good job of containing them. Tennessee will try to get Roger McCreary opposite Diggs as much as possible, but with Kristian Fulton out, expect Diggs to move around and try to exploit that hole in the secondary.

The Bills gave up just 52 yards on the ground to the Rams in Week 1 and they’re looking to maintain that level of run-stopping tenacity this week. The only problem is that they are facing Henry, who is nearly impossible to contain. The Giants limited him to 82 yards on 21 carries and both he and the team know they need a stronger output than that this week. With the Bills missing Ed Oliver from the middle of the defensive line, they going to have to figure something out in a hurry because King Henry is going to plow through the line with ease if they don’t.

The Titans did not do a good job of containing Saquon Barkley during their Week 1 matchup and while Singletary certainly isn’t at Barkley’s level, the Bills are excellent at opening running lanes for him. The rotation of backs can limit the fantasy upside for Singletary, but we did see a few flashes last week pf what can happen when they do commit to handing him the ball. If the Bills ground game can gain even half of the 238 rushing yards the Titans gave up in Week 1, Singletary — who could even find his way into the end zone tonight — should earn some nice value.

Buffalo’s pass defense did a real nice job against the Rams in Week 1 and, as a result, many could be overlooking Tannehill in this game. The Bills did their best to take away most of the aerial weapons except for Kupp, but they need to game plan differently for Tannehill — who spreads the ball out a lot more. Tannehill doesn’t have the luxury of one elite receiver, but now with added time to work with his receiving weapons he should be able to build on the 266 yards and 2 touchdowns he threw for against New York. The run will set up the pass, so if the Bills commit to taking away Henry, Tannehill could have a few surprises for them.

Davis isquestionable with an ankle injury suffered at practice late in the week, so if you’re looking at him for your lineups, monitor him in warm-ups. Late-week injuries are never good, but he was able to put in a limited practice session on Saturday. The questionable tag usually scares off the DFS masses, so if he is playing, he’s probably a decent contrarian move as he and Allen have an outstanding on-field rapport.

McKenzie is the sleeper darling for all DFS players, and while he didn’t see a ton of targets in Week 1 he did find his way into the endzone. Should Davis be out, McKenzie is expected to see the bigger increase in snaps. We already know he can be successful lining up on the outside and in the slot, so his versatility may be on early display in this one. Also keep in mind that he saw as many red-zone targets last week as Diggs, so you know Allen likes to dial him up in the endzone.

What’s not to love about a defense that managed 3 interceptions in Week 1 and spent all of last season atop the leaderboard in turnovers? The Bills will do what they can to contain the Titans ground game and will start ball-hawking more once Tannehill starts to air it out a little. They are the No. 1 defense in the fantasy realm for a reason, so if you need to save a little salary, this is a solid move.

He is still working himself back after suffering a torn ACL last season, but would it be the weirdest thing in the world to see Woods ask for the ball a little more against the team with whom his career started? It’s not exactly a huge revenge-game narrative, especially not after five years and a Super Bowl (sort of) with the Rams — but there is always a special feeling a player has about the team that drafted him and where it all began. Look for Tannehill to continue building their on-field relationship.

The rookie saw 5 targets in Week 1 and is slowly working himself into a rhythm with his quarterback. Remember, he missed a lot of time during the offseason with a variety of injuries but looked really strong in his debut last week. This is a relationship in progress, but Burks is an incredibly talented receiver who will continue to catch Tannehill’s eye.

He was a huge surprise for everyone in Week 1,as Tannehill struggled to find Woods as his potential No. 1 option on the field last week. Philips worked almost exclusively out of the slot last week and will likely see a ton of Taron Johnson in this one. It’s a fairly even matchup with a slight advantage ticking over to Philips, but keep an eye on him in pre-game warmups, as he is listed as questionable with a shoulder issue. He managed back-to-back limited practices on Friday and Saturday but may not be 100 percent. Does that lower his ownership? Maybe a little.

There are some weeks where Allen loves on Knox and feeds him a bunch of targets in the red zone, and then there are games like last week that has you wondering if the Bills even use a tight end. Last week was one of those weeks, but one also has to wonder if he stayed tethered to the line more because they were facing the likes of Aaron Donald, Bobby Wagner and A’Shawn Robinson. The Titans don’t have the same pass-rush, so look for Knox to run a few more routes this week and be bigger target — especially if Davis is out.

He was sharing snaps in the slot with McKenzie last week and while he saw one more target, it was McKenzie who got the looks inside the red zone. Crowder becomes a little bit more valuable if Davis is out as everyone will flock to using McKenzie and Knox, so consider him a dart-throw if Davis plays and a solid contrarian move if Davis is out.

There is nothing particularly flashy or exciting about NWI, but if you’re looking to get a little weird with your lineup and Philips is out, he is likely to be low-owned. He’s one of those guys Tannehill likes to use to help move the chains and chuck the occasional hero-ball to when the offense is in a groove. These are tough matchups against the Bills’ corners, but if Tannehill is spreading the ball around he will find a way to exploit some one-on-one coverage.

The Titans used him slightly more than Austin Hooper last week and he also saw more targets — not by a lot, but he also played more snaps and ran more routes. He is probably more of a dart-throw like his cohort, but if you are picking between the two, Swaim is likely to see more work near the goal-line.