The Indianapolis Colts have been in a back-and-forth battle for the AFC South title with the Tennessee Titans throughout this entire season. They are tied atop the division at 8-4, the head-to-head series was split, and Tennessee currently has a better division and conference record. In other words, Indianapolis has to keep winning. The Raiders need a win in an even worse way, as they required a last-second bomb against the winless Jets last week just to stay within striking distance of a wild-card sport.

So—even though this not any kind of rivalry matchup—it is a huge game for both teams on Sunday. It’s certainly one of the games to watch, and putting down a same-game parlay on it may also turn out to be a good idea. Let’s take a look at the best such option for Colts vs. Raiders, and be sure to check out our full preview of the game for picks on the side and total.

Part of the value in same-game parlays is that all of its components can be correlated if you so choose. For example, a big game for Jonathan Taylor would suggest overall success for the Colts. However, plays that aren’t correlated can drive up the payout in big way. That’s why this particular four-leg parlay has +2750 odds. The over on yardage for Derek Carr and Henry Ruggs III of the Raiders goes against a Colts cover, but we think the visitors can get the job done even if this turns into a high-scoring contest. After all, as you can see in our preview we have both Indy and the over.

Every time the Colts have lost this season, they have rebounded with at least two wins in succession. That trend would indicate another victory on Sunday, as so far Indianapolis has bounced back from a recent loss to Tennessee by beating Houston last week. With Las Vegas up next on its schedule, Indianapolis should be able to make it two straight. The Raiders were embarrassed 43-6 by Atlanta to wrap up November and the only reason they defeated the winless Jets last week was because of Gregg Williams’ infamous all-out blitz in the final seconds. Their defense has been terrible of late and running back Josh Jacobs is questionable for Sunday (as of Saturday night he appears to be trending toward not playing).

Taylor is once again the undisputed RB1 in Indianapolis. The rookie out of Wisconsin has gotten 42 touches in the past two games, parlaying those into 249 yards and one touchdown (via reception last weekend against the Texans). He now faces a Las Vegas defense that has been horrendous in recent weeks, as the aforementioned performances against the Falcons (43 points allowed) and Jets (28 points) suggest. The Raiders have also surrendered the second-most rushing touchdowns in the NFL (19). 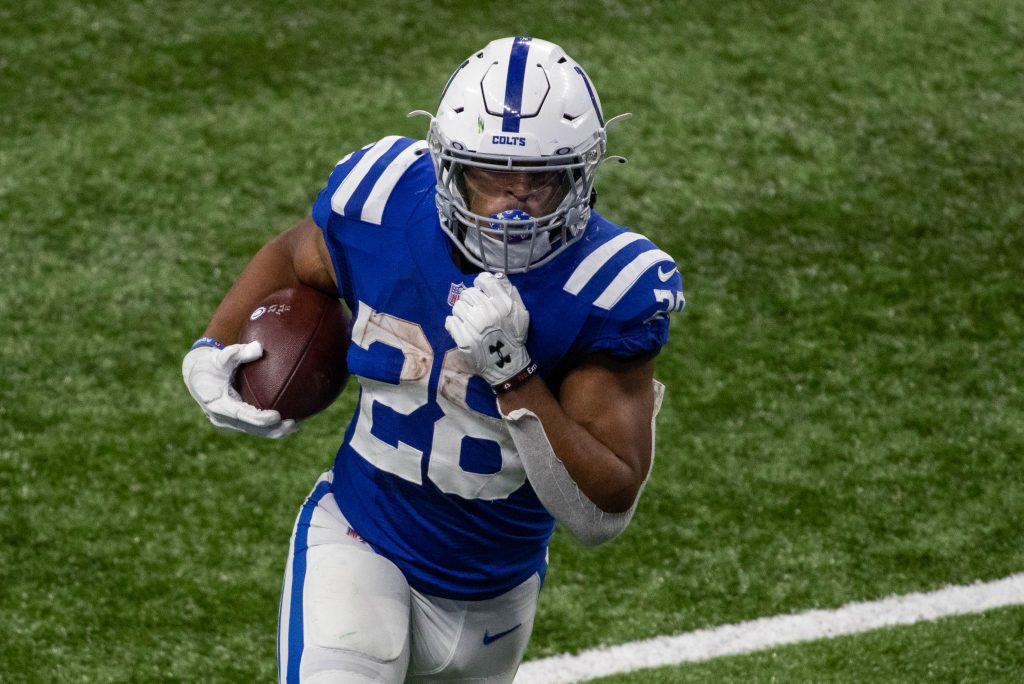 Although I don’t see the currently one-dimensional Raiders offense going wild against a stout Indianapolis defense, the good news for them is that Indy is better against the run than against the pass (its 7.3 yards per pass attempt allowed rank in the bottom half of the league). If there is one thing Las Vegas can still do with some effectiveness, it is moving the ball through the air with Carr. He has passed for 3,027 yards this year with 22 touchdowns and only five interceptions.

Ruggs has been one of the beneficiaries of Carr’s mostly solid play. In turn, the rookie out of Alabama has been important for Carr’s production by giving the veteran signal-caller another much-needed weapon. Ruggs has 20 catches for 396 yards and two scores in 2020, and over the past two games he has six receptions on nine targets while scoring once against the Jets. With tight end Darren Waller on fire and demanding so much defensive attention (especially in the red zone), Ruggs should have some opportunities on Sunday.