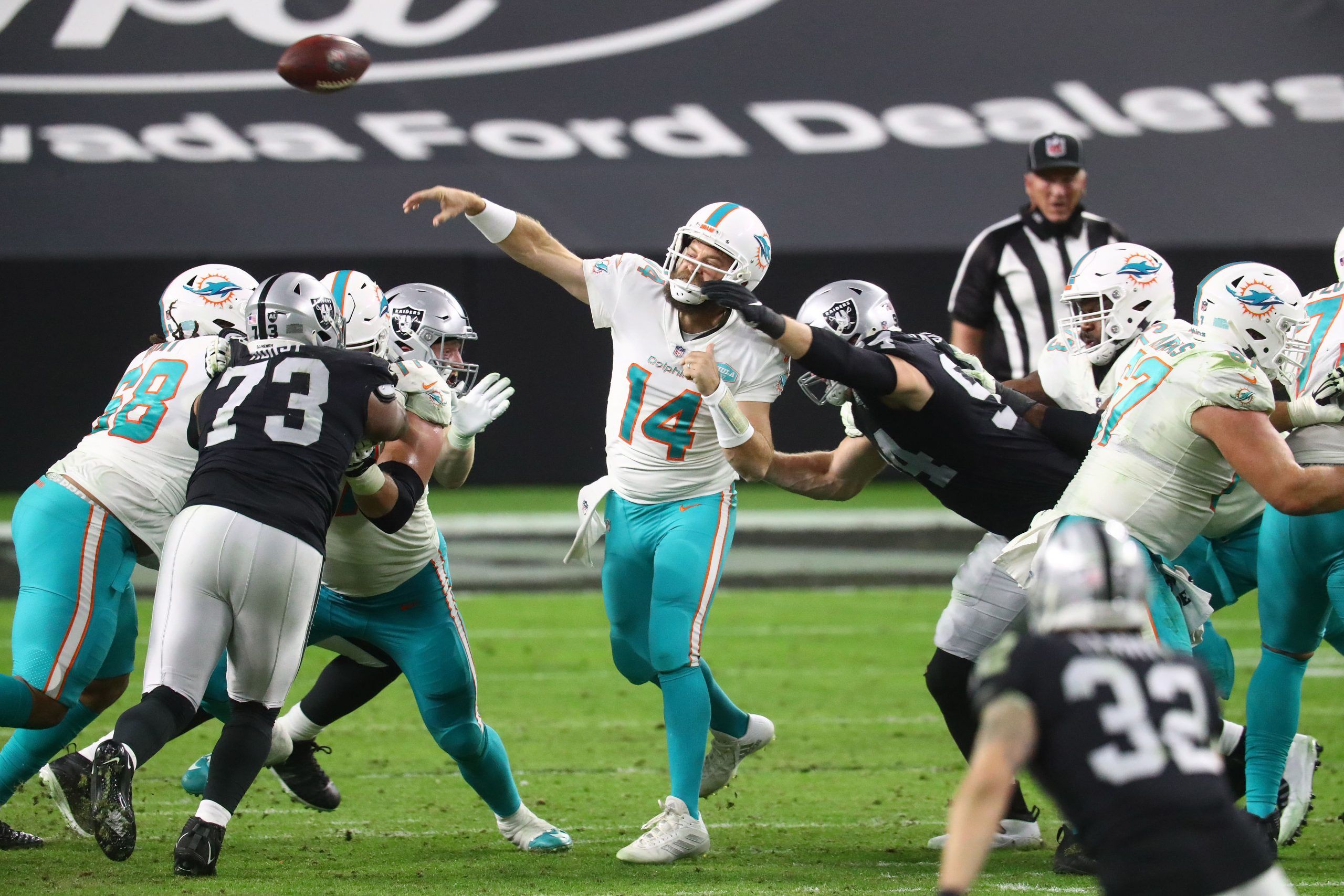 To be honest I would rather have had two more games on an already full Sunday slate than the first two of three stand-alone contests we witnessed on a rare NFL Saturday. It started with the Tampa Bay Buccaneers’ 47-7 rout of the Detroit Lion that was over by…well, just about right after the opening kickoff. That was followed by the playoff hopeful Arizona Cardinals laying an egg throughout a 20-12 loss as the hands of a San Francisco 49ers squad that has already been eliminated from postseason contention. The nightcap saved the day, even though it needed a absolutely wild finish to make amends for what was also a bad football game for three quarters. In the end, the Miami Dolphins enhanced their playoff chances and eliminated the Las Vegas Raiders with a 26-25 victory.

Raiders down and out

Needing a win to stay in mathematical contention, the Raiders somehow found a way to lose despite leading three different times in the fourth quarter. They blew lead after lead after lead to a team that had no idea what it was doing at quarterback. Granted Miami’s decision to bench Tua Tagovailoa for Ryan Fitzpatrick in the fourth quarter paid off big-time, but it was still a curious one. Whatever the case, the Raiders took a 25-23 advantage with 19 seconds left to seemingly put the game away since their opponents had to timeouts left. Instead, they gave up 49 yards on the first play of the Dolphins’ final drive—34 on a pass and 15 for a roughing the passer penalty. Jason Sanders promptly booted the game-winning field goal for Miami. Keep in mind that it should have been a tying field goal, but Las Vegas kicker Daniel Carlson had missed an extra point earlier in the fourth quarter.

HOW did Fitzpatrick get this throw off 🤯

Congratulations to the ‘Fins, I guess. But unless “Fitzmagic” strikes again and does so in even more improbable fashion than it did on Saturday, they will either miss the playoffs or find themselves quickly eliminated after making it.

Destiny no longer in Cardinals’ hands

The Cardinals were not the worst of the six NFL teams in action on Saturday, but they suffered the costliest loss (it’s pretty obvious that Las Vegas was going to miss the playoffs anyway). As a result of their 20-12 setback against visiting San Francisco, the Cards no longer control their own destiny in the NFC playoff race. Adding insult to injury, they find themselves at the mercy of the Bears. You know things aren’t going well when you need help from the Bears in order to qualify for the postseason.

Chicago is suddenly -278 to make the playoffs, while Arizona’s odds have ballooned to +163. Even at plus money, I’m not touching the Cardinals after that performance; not when they still have to face the Rams next week, and also not when the Bears get to play Jacksonville and then a Green Bay team that will perhaps have already locked up the NFC’s No. 1 seed.

Overreaction Monday (or in this case Saturday/Sunday) should not include bold statements regarding the Buccaneers’ Super Bowl chances. After all, the opponents we are talking about here are the Detroit Lions. They stink. They are currently No. 26 in our power rankings…and that’s probably too high. The only reason they aren’t lower are because there are just so many awful teams in this football league. And the Lions are even worse when Chase Daniel is playing quarterback and when basically a third of their coaching staff is sidelined because of COVID-19.

Yes, the Buccaneers are good. Yes, they are going to the playoffs. Yes, Tom Brady just set the franchise record with 36 touchdown passes in a single season. But let’s not wander too far into the forest to see the trees. There are better teams in this league, better teams in their own conference, and a better team in their own division. Although +500 odds to win the NFC aren’t terrible, they also aren’t great.