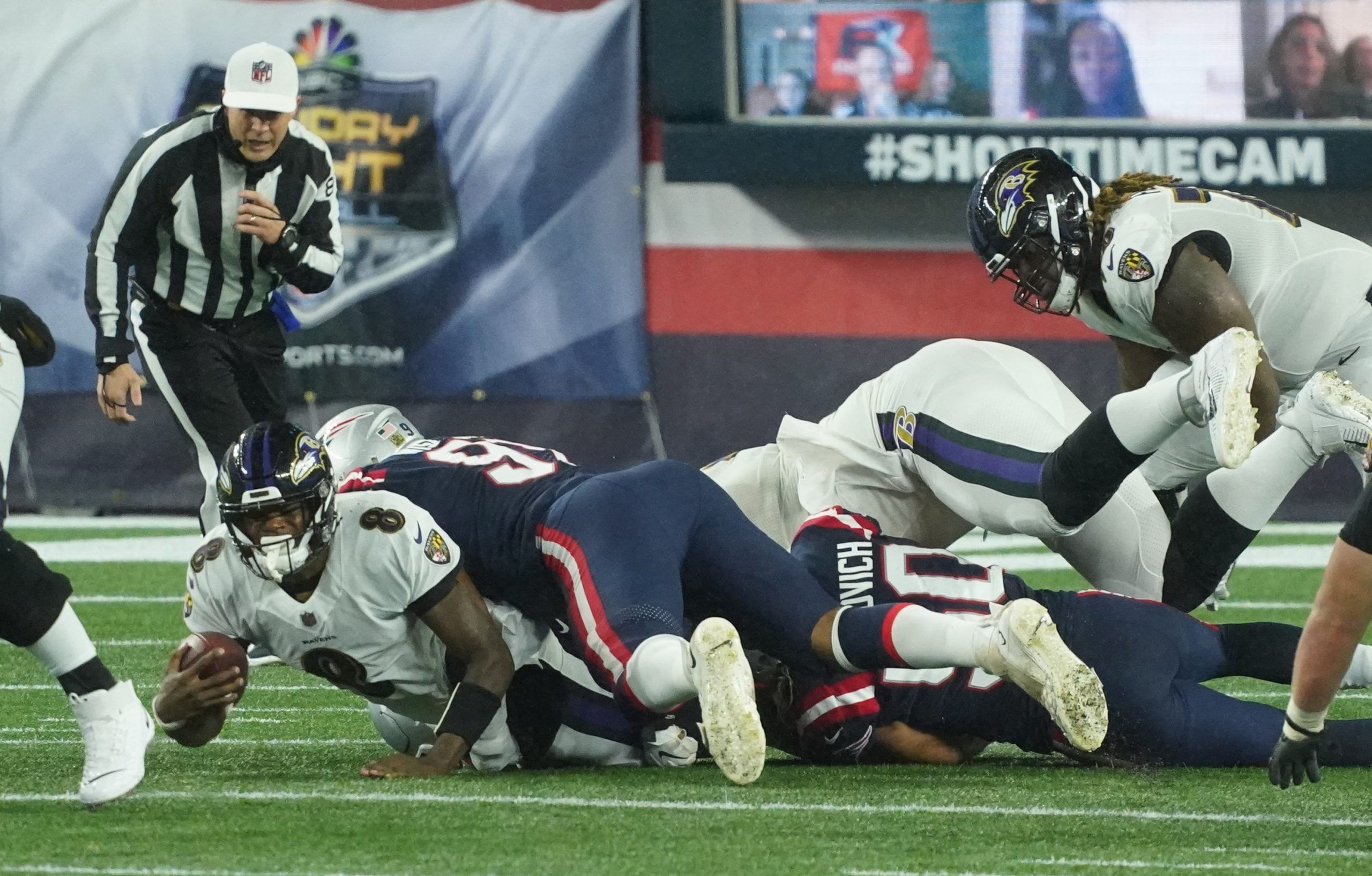 Easily the biggest upset of the Week 10 NFL slate happened on Sunday Night Football as the New England Patriots took down the Baltimore Ravens 23-17. New England’s defense stepped up to completely shutdown Baltimore’s rushing attack, and Damien Harris put the offense on his back.

I wrote a few weeks back that I wasn’t so sure the Pats were done for good, and I feel stronger than ever about that now. Baltimore on the other hand certainly hasn’t looked like a legit contender recently, and they have some glaring problems they’ll need to address in a hurry before the playoffs start. Let’s dive in:

The Ravens are in big trouble

It was easy to ignore for a while since they were still racking up wins, but it’s no longer deniable. The Ravens have major issues, and it’s time more people started talking about it. Even as they went 6-2 through their first eight games they didn’t look particularly impressive, especially on offense. Lamar Jackson has been far from the only problem, but he’s undoubtedly been much worse than he was in his MVP season in 2019.

Offensive coordinator Greg Roman has regressed too, as his game plans are lacking the creativity they had last year. Even against a Patriots defense that was giving up the most yards per attempt of any team in the league entering this game, Jackson wasn’t anything better than average as a passer.

The passing game just doesn’t have much pop right now, and J.K. Dobbins and Mark Ingram got nothing going on the ground Sunday. It got overshadowed by their win, but the offense only put up 17 points last week against the Colts and they did absolutely nothing in the second half.

The defense has been very good, but it isn’t perfect enough to make up for it. They’re without stud defensive lineman Calais Campbell for the next couple of weeks, and if Sunday’s game was any indication they might get gashed on the ground without him.

Winning the division is pretty much out of the question at this point, which means assuming the Ravens make the playoffs they’ll be headed on the road for the first round. Their next two games are against the Titans and Steelers, so things could get worse before they get better.

JC Jackson leads the league in INTs. He made this one look way too easy! 💪

The Patriots aren’t done yet

Pretty much everybody wrote their obituary of this 2020 Patriots season already. They’ve been declared finished for a while now, but they’ve since bounced back with two straight wins. Cam Newton has looked a lot more comfortable the past couple of weeks, and Jakobi Meyers is starting to emerge as a legit weapon.

Harris is breaking out of the backfield, and had 121 yards on the ground in this one. Julian Edelman will be returning from his knee injury any week now, and all of the sudden the Patriots’ much-maligned skill position group doesn’t look so bad. A Bill Belichick defense was never going to be as bad as they looked through the first half of the season, and it wouldn’t be surprising if they turned a corner on Sunday.

Cornerback J.C. Jackson had an interception Sunday night and reigning Defensive Player of the Year Stephon Gilmore should be back soon, so the secondary is going to trend up. If the run defense can play like they did Sunday, limiting Dobbins and Ingram to only 18 yards on ten carries, this has the potential to be a very solid unit.

When you dig into it, four of the Patriots’ five losses came to the Seahawks, Chiefs, 49ers, and Bills, some of the most talented teams in the league. A couple of them came down to the final seconds, so I think talk of New England’s struggles have been a bit overblown. The schedule coming up is a lot softer and with the expanded playoff format, the 4-5 Pats aren’t done quite yet.