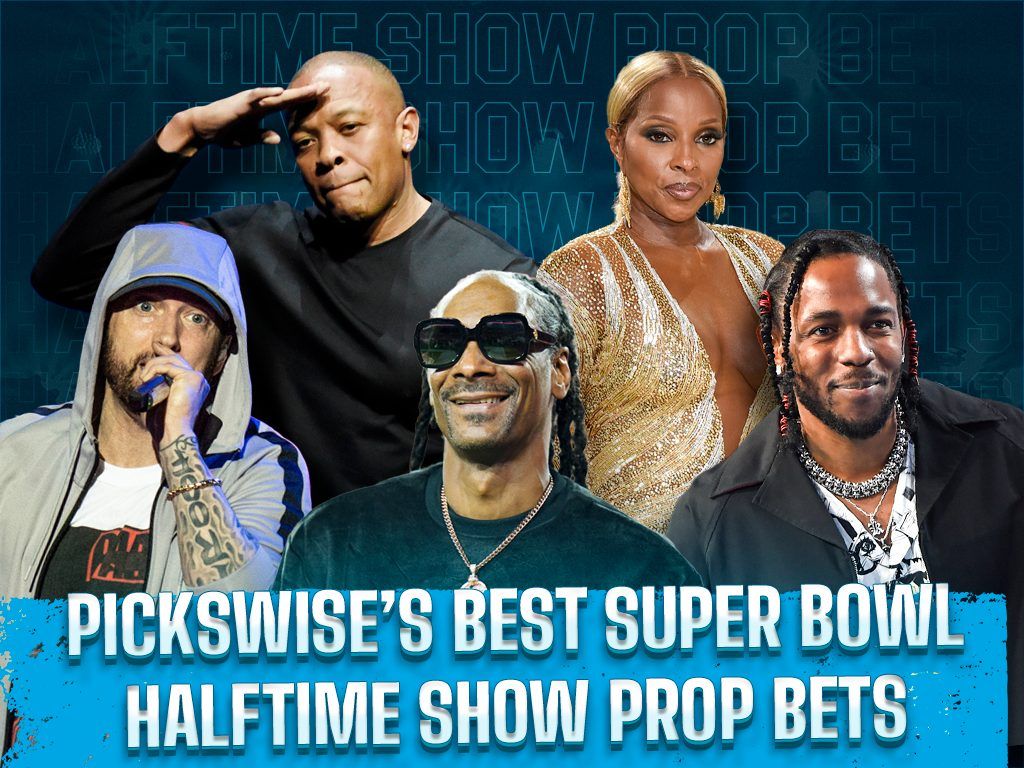 I'm an NFL handicapper here at Pickswise who was raised in a household full of sports fanatics. Since I unfortunately never had LeBron James' jumping ability I wasn't able to make it to the NBA, and chose writing about sports as the next best thing. An avid sports bettor myself, I'm excited to get to write about the industry as it gets set to take off across the country. Buckle up.
Updated: 7:49 AM ET February 08, 2022

How To Bet On the Half Time Show

Odds are now widely available from the major sportsbooks for the Super Bowl LVI halftime show, and there are a whole bunch of interesting props. As you’re likely aware, Mary J. Blige, Eminem, Kendrick Lamar, Snoop Dogg and Dr. Dre will all be taking the stage for what should be an epic show for this year’s performance.

Pretty much all major sportsbooks will carry odds for the Super Bowl halftime show and various props, and that includes DraftKings, FanDuel, BetMGM, William Hill, BetAmerica, and Unibet.

Unlike other Super Bowl novelty prop bets like the coin toss and gatorade color, the halftime ones change every year since the performer does as well. For example last year when The Weeknd was the Super Bowl 55 halftime act, there were a wide array of props available.

One was a simple over/under on how many songs would be played, which was set at 8 (over was -220 and under was +155). Another was how many wardrobe changes The Weeknd would have, and you would’ve had to lay -380 to go over 0.5 There are always some fun ones that are directly tied to the performers themselves, like two years ago when a prop was whether or not Alex Rodriguez (performer Jennifer Lopez’s husband) would be shown during the broadcast. ‘Yes’ was +175 and ‘no’ was -260.

The year that before Maroon 5 was the halftime act, and there were a slew of props surrounding frontman Adam Levine. One of those was whether he’d wear a hat to start the show. The answer was no. With any musical act, there are always going to be ‘first song performed’ props. You get the idea.

There are a bunch of novelty bets this year, and we’ve compiled a few interesting ones courtesy of BetUS. With a whopping five different performers this year, it’s going to be interesting to see who opens the show. Mary J. Blige is the odds-on favorite to perform first at +150, followed by Kendrick Lamar at +225 and then Snoop Dogg at +325, Dr. Dre at +450 and Eminem at +500.

You can also bet on whether or not Eminem will make a political statement during his time on the mic (-140 yes, +100 no) or whether or not he’ll have to be censored for television at any point (-175 for yes, +135 for no). One fun one is whether or not all five artists will collaborate together for a song. Yes is an underdog at +150 for that one, while you’d have to lay -200 to bet no.

Will the group debut a previously unheard new song at any point? You can get +350 if you want to bet yes on that, whereas no is -600. This next one is sure to be popular. You can bet on whether or not Snoop Dogg will smoke on stage. Yes is +200, no is -250.

Check out our Super Bowl prop bets and Super Bowl predictions for the best free sports betting picks ahead of the big game.