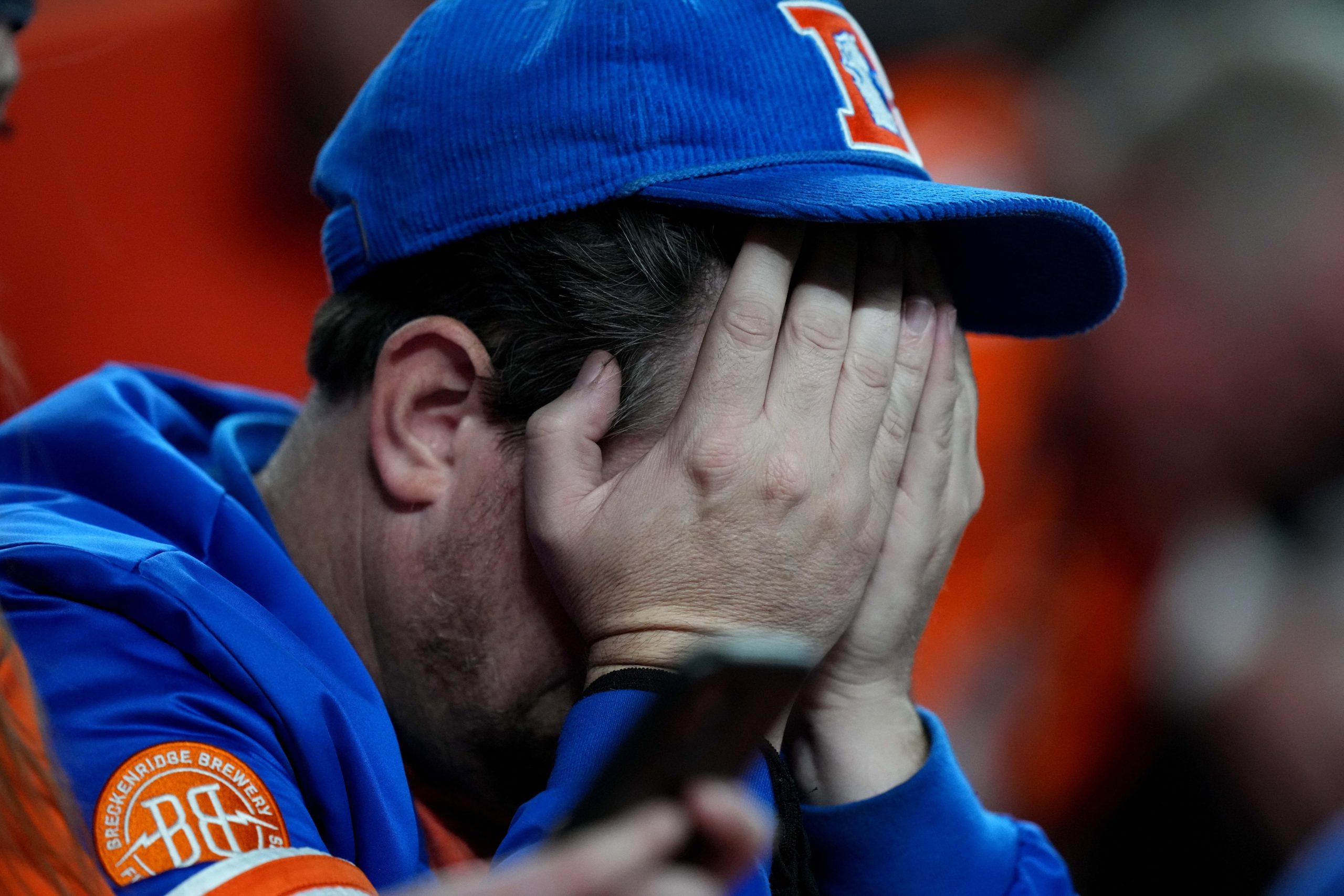 There is nothing fun about being on the wrong end of bad beats. But when you don’t have a dog in the fight, they are extremely fun to talk about. That’s why SportsCenter’s “Bad Beats” segment hosted by Scott Van Pelt and Stanford Steve is so wildly entertaining.

And as 2021 draws to a close, we are going to channel our inner SVP and do exactly that: find the WORST bad beats!

Here is a countdown of our Top 10 worst Bad Beats of 2021. Enjoy the show! (Unless, of course, you were one of the many victims!)

This is by no means the worst of the worst when it comes to bad beats, but there is just something about losing bets because of overtime that hits different. You know you’ve made the right play. You deserve to be rewarded. Instead, victory gets stolen from you by OT. Such was the case in a thrilling NCAA Tournament first-round game between Florida and Virginia Tech. With the total set at 134.5, this contest was always trending Under after just 60 points were scored in the first half. Only overtime could lose it for Under bettors, and 5 additional minutes seemed unlikely at best when UF led by 5 with less than 50 seconds remaining. But the Gators committed a turnover, missed two free-throws with 7 seconds left, and then watched VT hit a tying 3-pointer with 1 second on the clock to force the extra frame. After 128 points were scored in regulation, Under 134.5 ended up losing with Florida’s 75-70 victory. March Madness indeed!

Few betting losses are more frustrating than when you take the -1.5 puck line instead of the money line in hockey (which is why it’s rarely advisable to do so). You may think you have to do it in order to get any kind of value on a big favorite in the NHL, but you’re still kicking yourself when that teams wins by 1. Some say if you bet the puck line, you’re just asking for empty-net pain. The Maple Leafs had no business winning by only 1 against the Blue Jackets on December 7. Toronto led 5-1 going into the third period and still led 5-2 with under 4 minutes left. They still led 5-3 with fewer than 2 seconds left! Nonetheless, Max Domi of Columbus lit the lamp with 0.6 seconds on the clock for a 5-4 loss and an even more damaging loss for Maple Leafs -1.5 puck line backers.

This is one of those bad beats that didn’t kill you slowly; it just ripped your heart out all at once. Hopefully not too many bettors were on a first-half total, but if you were…sorry for those on the Over in this October meeting between the Wizards and Celtics. With the score 62-52 in the closing seconds of the first half and the total set at 114, Bradley Beal had not one but two wide open layups that would have cashed the over. Beal missed both as time expired. You really have to see it to believe it.

Some bad beats are slow to develop; you can just see them coming from a mile away once things start going downhill. That was the case for 49ers -9.5 bettors in the San Francisco vs Detroit Week 1 meeting. The Niners looked well on their way to a double-digit victory when they led 31-10 at halftime and – even better – 38-10 with less than 5 minutes remaining in the third quarter. Instead, the Lions clawed all the way back to lose by just 8 after scoring 2 touchdowns in the final 1:53. They needed both 2-point conversions to cover and – much to the chagrin of San Francisco backers – both were converted. A successful onside kick by Detroit (thanks to a botched recovery effort by George Kittle) following its penultimate TD was also to blame. Not a fun start for Niners bettors on the first NFL Sunday of the season.

This catch would’ve cashed Akron +48.5 and the over 66.5 pic.twitter.com/POyXtcGSBN

The beauty of betting is that a score can be 59-7 in the closing minutes or even seconds and everything can still be in play. Such was the case in Ohio State vs Akron on the college gridiron in late September. With the Zips (+48.5) trailing by 52 and the total just a half-point under, they found themselves at the Buckeyes’ 14-yard line – 1st-and-10 with 15 seconds remaining. Receiver Tony Grimes Jr. dropped a wide-open touchdown pass that would have cashed both Akron +48.5 and Over 66.5 in a single play. The Zips promptly got sacked on each of the next two plays as time expired. For anyone who was on both the Zips and the over, Grimes’ nauseating drop surely puts him on their betting black list until the end of time.

Coming down the stretch of its November 17 road game against Arkansas, Northern Iowa looked like a lock to cover +12.5 and had a great chance to pull off an outright upset. The Panthers led 75-72 with a little more than 4 minutes remaining, were tied with less than 3:40 to play, and actually got the lead back with less than 3 minutes to go. How they managed to lose by more than the +12.5 spread – and in regulation, too – is hard to fathom…and that’s even if you consult the video evidence! You still can’t believe it! UNI committed 3 turnovers in the last 1:50, made nothing more than 2 free-throws in the last 3:12, and continued to foul with 18 seconds left even though the game was all but over with Arkansas leading 92-80. One last FT by the Hogs improbably prevented the Panthers from covering.

4) January 16: Los Angeles Kings ML vs Minnesota Wild and Under 5.5

Horrible beat for Kings and Under 5.5 bettors 🤮

Minnesota's Ryan Suter scores as time expires in regulation. Wild would go on to win it in OT

In the second game of last hockey season, the Kings led the Wild 3-1 going into the third period and were still clinging to a 3-2 lead with the clock ticking down. Lo and behold, Minnesota’s Matt Dumba lit the lamp with 0.3 seconds – yes, 0.3 seconds – remaining to force overtime. And that was after Los Angeles hit the post on the Minnesota’s empty net (granted that would have cashed the over, too, but it would have clinched victory for the Kings and their bettors). Dumba’s stunning goal ended the hopes of Under 5.5 bettors in ridiculously brutal fashion, and further heartbreak would ensue for anyone who also backed the Kings. The Wild went on to complete their comeback by scoring in OT for a 4-3 victory.

AND THEY GET ANOTHER SHOT AND MISS AS TIME EXPIRES 🤮pic.twitter.com/FwbNFKYWMB

Getting more than 4 touchdowns, Kent State was in great shape to cover +29.5 when it trailed Texas A&M by a respectable 10-3 margin at halftime in their season-opening tilt on September 4. The Golden Flashes also looked like locks even when they were trailing by more than the number (41-10) in the final minutes. That’s because kicker Andrew Glass was set up for a chip shot 24-yard field goal with 3:25 remaining. Glass somehow missed it, but he would get a similarly simple try from 25 yards out on the final play of the game. It’s hard to understand why Kent State was kicking field goals in the closing stages of a blowout, but they were. As such, Golden Flashes backers should have been on their way to the bank. Instead, Glass missed again and Texas A&M held on to win by 31.

It’s bad enough suffering a bad beat late in a game. It’s even worse when you suffer one after the game. That was the case when a stat correction the morning after the Bears-Vikings Week 15 contest took Justin Fields’ rushing yards from 42 to 35 with his quota set at 37.5. Fields had taken a knee 7 yards behind the line of scrimmage on a play early in the fourth quarter. Once ruled a sack, it was later changed to a rush for minus-7 yards. If you were on Chicago +7, this game was even more of a disaster. Trailing 17-3, Fields threw a touchdown pass to Jesper Horsted on the final play to make the score 17-9. Because zero seconds remained and any kind of PAT could not affect the overall game outcome, there was no PAT – when a simple extra point would have resulted in a push for Bears +7 bettors.

Both of these bad beats are beyond bad. If you were on both, well, it is unquestionably the worst of the year. In what was an unusually meaningless Clemson vs Florida State game in late October, bettors were probably eager to spice up the matchup with some wagers. Commiserations if you did so by hammering Florida State and the under. With the Seminoles trailing 24-20 with 4 seconds left at their own 31-yard line, a ‘Noles cover of +9.5 and Under 47.5 should have been locks. Instead, Clemson scored on a fumble recovery following a ridiculous razzle-dazzle sequence on the final play of the game. With that, the Tigers won 30-20 to cover the spread and cash the Over in one fell swoop.