HomeAnalysisNFL AnalysisWhat is the future of the 2020 Cleveland Browns without Odell Beckham Jr.?

What is the future of the 2020 Cleveland Browns without Odell Beckham Jr.? 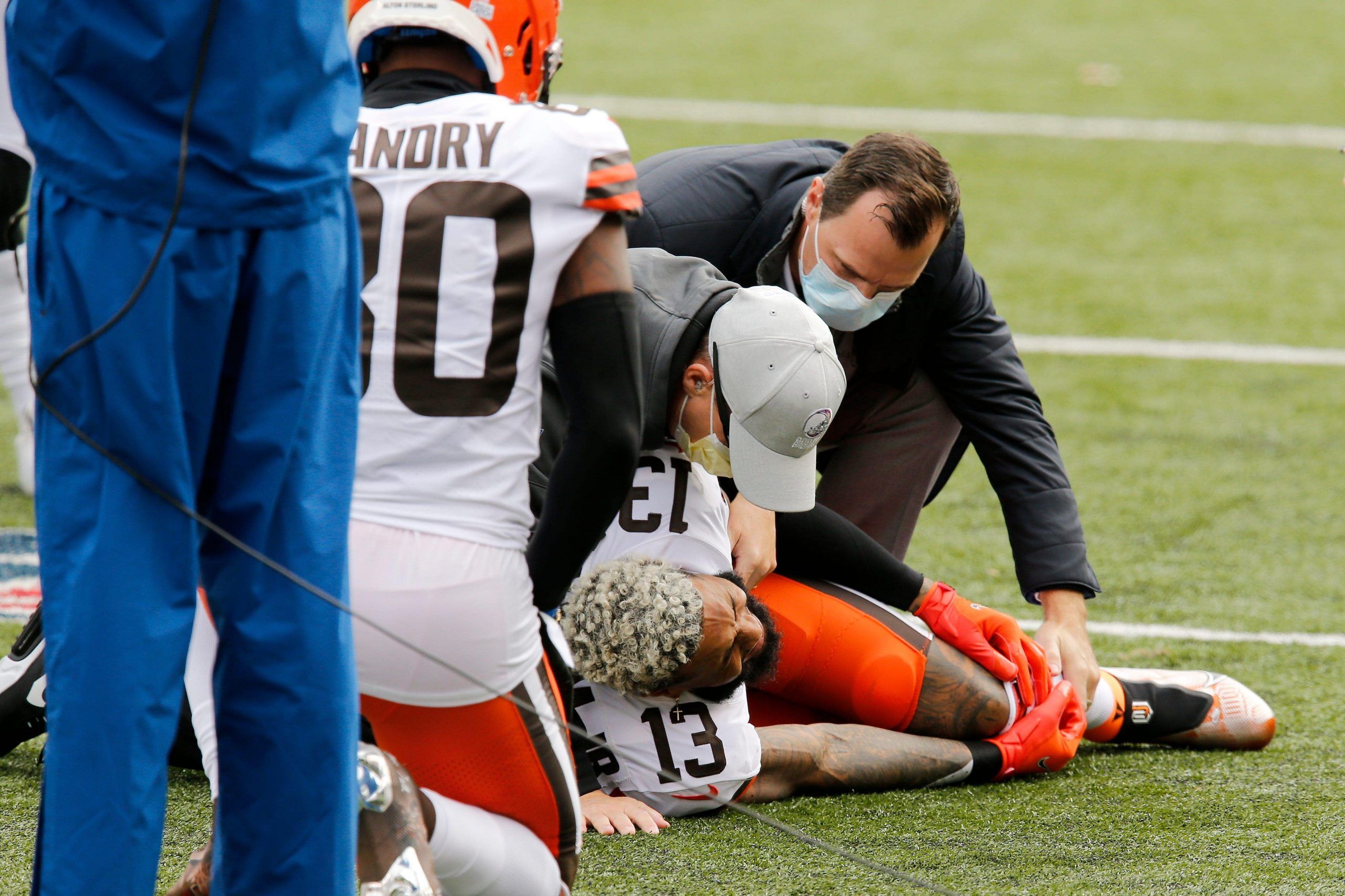 Since graduating from Davidson (The College That Stephen Curry Built), I have been writing about sports--just about any and all you can think of!--and coaching tennis in Atlanta, Ga. Beyond the four major sports, I am an avid tennis fan and cover the ATP Tour on a daily basis. If I'm not busy writing, you can generally find me on a tennis court or traveling the world wherever a sporting event takes me.
@Dimonator133
Updated: 6:29 AM ET October 27, 2020

The Cleveland Browns’ worst fears were confirmed on Monday when it was revealed that Odell Beckham Jr. suffered a season-ending torn ACL during Sunday’s 37-34 victory over the Cincinnati Bengals. Beckham sustained the injury on Cleveland’s second play from scrimmage while trying to chase down Cincinnati cornerback Darius Phillips after Phillips picked off quarterback Baker Mayfield.

Yes, the Browns won the game. But just how big of a loss is this?

OBJ by the numbers

Beckham has been inconsistent but at times productive during his two-year stint in Cleveland. In 2019, the former LSU standout caught 74 passes for 133 yards and four touchdowns. Through six games this season he made 23 receptions for 319 yards and three scores. Against Dallas in Week 4 he found the endzone twice on five catches that went for 81 yards. In the first five weeks of this 2020 campaign, Mayfield targeted Beckham 39 times. OBJ still leads his team with 43 targets. Needless to say, his absence will be a big blow for Mayfield.

“Obviously it’s a big loss,” head coach Kevin Stefanski assured. “He’s a huge part of what we do. So now we’ll just have to huddle up and find some different ways and find some different people and put them in that role. You never replace a player of Odell’s caliber with one player. It’s going to take multiple guys. That’s the challenge we have and I think our guys will be up to the challenge.”

Were they really that good even with him?

The Browns’ ability to meet that challenge is a fair question, but it is also worth asking just how good they were in the first place. Even at 4-2 going into this past week, this team was not exactly looking like some kind of juggernaut. Its wins have come over Cincinnati (twice, by a combined eight points), the Washington Football Team (by five points), the Dallas Cowboys, and the Indianapolis Colts. The Bengals, Cowboys, and TWFT are a combined 5-15-1. Cleveland’s two losses, meanwhile, have come by a combined 76-13 scored against the Baltimore Ravens and Pittsburgh Steelers. As those results indicate, the Browns are a lot closer to the bottom of the barrel than they are to the league’s best.

The Throw.
The Catch.@bakermayfield to @dpeoplesjones FOR THE WIN.

That Stefanski’s squad is having its fair share of problems despite its 5-2 record is—or was—no fault of Beckham’s. The defense has surrendered at least 30 points in five of seven contests this year. Cleveland is 29th in scoring defense and 21st in total defense even though it is more respectable in opponents’ yards per play (17th at 5.6 allowed).

The problem, of course, is that the Browns’ offense pretty much has to be great every time out in order to overcome such defensive deficiencies. That won’t be easy to do with running back Nick Chubb on injured reserved (designated to return) and now Beckham done for the season. It must be noted that Jarvis Landry is Cleveland’s only other wide receiver with more than 11 catches in 2020. Rashard Higgins (11 receptions for 163 yards and two TDs) will have to step up in a big way in place of OBJ.

On the bright side, running back Kareem Hunt is picking up the slack for Chubb—who should be back in a few weeks. When Chubb does return, this team can feature a ground-and-pound offense with its dynamic duo in the backfield.

A look at the schedule

Look no further than the schedule to see that there remains plenty of good news for the Browns. They still get to play the three worst teams in our Week 8 Power Rankings—the two New York franchises plus the Jacksonville Jaguars. Moreover, their next three games are all at home against opponents who are either .500 or worse (Las Vegas, Houston, and Philadelphia).

Cleveland can get to eight wins simply by taking care of NYJ, NYG, and JAX. It could reach double-figures by also taking just two out of three against LV, HOU, and PHI. That means this squad has a realistic chance of going 10-6 even if it loses—as expected—to Tennessee, Pittsburgh, and Baltimore the rest of the way.

Even without Beckham, the Browns should be playoff-bound. Of course, winning a playoff game (likely on the road as a wild-card team) is an entirely different proposition.