2021 NFL Draft betting - Who will be the first non-quarterback drafted? 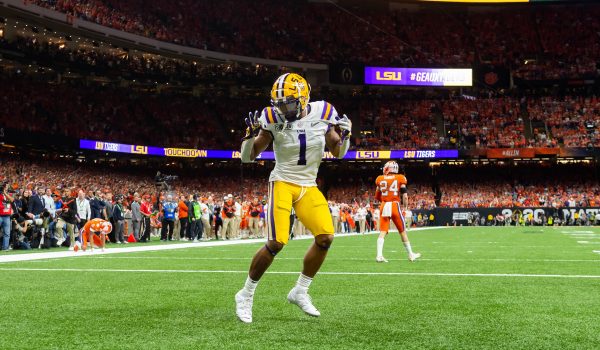 The 2021 NFL Draft is finally here. The buzz is off the charts, and it’ll be one of the most interesting drafts in recent memory. One of the most exciting aspects is that quarterbacks are virtually guaranteed to be the first three picks on Thursday. After that, things are a lot more up in the air.

The Falcons are currently slated to pick fourth, but there could be a team that trades up for a quarterback. It’s also possible the Falcons elect to draft a Matt Ryan successor themselves. Trevor Lawrence, Zach Wilson, Mac Jones, Trey Lance, and Justin Fields are all great, but a non-quarterback will have to be picked at some point.

The draft is always one of my favorite events to bet on, with a slew of props offered by sportsbooks. One of those props is which player will be the first non-QB drafted, and that’s what we’ll be talking about today. But first, if you haven’t already, check out our mock draft!

Here are the odds, courtesy of DraftKings:

This prop essentially boils down to whether you think the Falcons want another pass-catching weapon. A lot of people think they’ll draft Pitts, giving them a great trio of the Florida star, Calvin Ridley, and Julio Jones. Reports also emerged this week that the team could deal Jones this summer to create cap space.

If you think it’s going to be Chase, that likely means the first four guys taken are quarterbacks. The Bengals have been heavily linked to the LSU receiver at five. Either the Falcons would need to draft Lance or Fields to become the heir to Ryan, or a team would need to trade with Atlanta to take one of them.

Sewell would require the same scenario, with the Bengals passing on Chase in favor of bolstering Joe Burrow’s protection. The team signed Riley Reiff but they still need offensive line help, so Sewell certainly can’t be ruled out. Slater isn’t totally out of the question, as there have been murmurs that some teams have him as the top tackle ahead of Sewell. Surtain feels like a pretty unlikely long-shot at 20/1.

No more wasting time, let’s dive into my best bet:

I agree with my colleague Ricky, who did our mock draft, that Pitts is a likely pick at four. But at these odds, I think Chase makes the most sense at +250. Cincy is pretty locked onto Chase at five, and there’s a very good chance a quarterback is drafted at four.

The fact that the Falcons are considering trading Jones tells me they’re already thinking about the future. If they’re going to trade Jones, then they aren’t all-in on winning in 2021. That means they’re certainly thinking about a Ryan replacement, and they know they might not pick in the top five again any time soon. Ryan is about to turn 36, and the clock is ticking.

I don’t think teams are quite as high on Sewell as the media is. There was a recent report that the Bengals’ front office believes there are potential starters at offensive tackle that will be available in the second and third rounds. As such, I don’t think they’ll pass on Burrow’s college teammate Chase.

NFL 3 days ago
Where will Aaron Rodgers play in 2021? Betting odds and predictions

NFL 4 days ago
How good will Trevor Lawrence and Zach Wilson be? Breaking down the 2021 NFL season player props for the two rookies

A historic 2021 NFL Draft is in the books. As expected, it began with three…
View Article