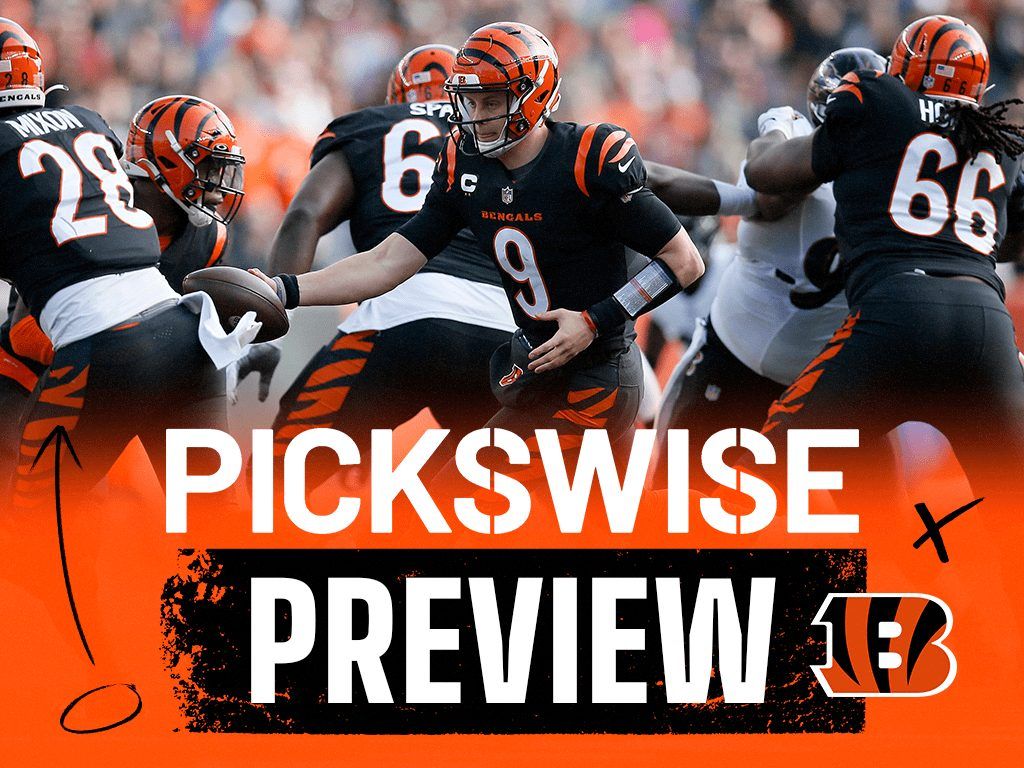 The 2021 season could not have gone much better for the Cincinnati Bengals, who became one of the NFL’s biggest fairytale successes for years. Coming off a 4-11-1 season, the Bengals defied their status as 150/1 preseason longshots to reach the Super Bowl, which they lost 23-20 to the LA Rams having led for much of the second half.

Rookie receiver Ja’Marr Chase formed a formidable partnership with gunslinging QB Joe Burrow, while the Bengals defense stepped up and they mostly found ways to overcome their offensive line issues. Expectations have been raised this season though, and while the Bengals might well be an even stronger team this year, there are plenty of obstacles in their path as they bid for back-to-back AFC titles.

The Bengals are joint-10th in DraftKings Sportsbook’s odds to win Super Bowl 57 at +2200, the same mark as the Ravens and Colts.

The defending AFC champions are 6th favorites to retain their title at +1100, behind the Bills, Chiefs, Chargers, Broncos and Ravens.

DraftKings is not currently offering odds on the AFC North division, due to the uncertainty over Browns QB Deshaun Watson’s suspension, but FanDuel Sportsbook has the Bengals as +180 second-favorites for the divisional title, just behind the Ravens (+160) with the Browns at +300 and the Steelers +950.

Bengals fans will love to think back to the 2021 season. Their Super Bowl run came from humble beginnings, with QB Joe Burrow coming off a knee injury that curtailed his rookie season, and observers worried that he’d be in big trouble if the team didn’t use their first-round pick on offensive lineman Penei Sewell to protect him. The Bengals preferred to roll the dice and take wide receiver Ja’Marr Chase instead and it’s hard to dispute that move now Chase has proved he’s an elite-level performer.

The Bengals still didn’t look like Super Bowl contenders when they reached their Week 10 bye at 5-4 coming off a loss to the struggling Jets and a 41-14 hammering at home by the Browns, with a 41-17 win over the Ravens their best result by some distance. They edged their way into contention, though, and a 34-31 win over the Chiefs proved crucial to them claiming the divisional title with a 10-7 record. The Raiders, Titans and Chiefs were all overcome as the Bengals found their stride in the playoffs, but the Rams were just too strong in the Super Bowl.

The Bengals have enhanced their reputation with last season’s stellar run and they might be even stronger as a team this year, having finally made some positive moves to strengthen their weak link on the offensive line. Burrow — now further removed from his surgery — and his talented receiving group are a threat to any defense and Joe Mixon is one of the most underrated running backs in the league. Some of the gambles they took on defense last season paid off handsomely with Troy Hendrickson in particular proving to be worth the money and the pressure is well and truly off head coach Zac Taylor, which was not the case at the start of last season.

However, there has to be a chance that the Bengals can be improved and yet not have everything go quite so well for them as it did in last year’s charmed campaign. They can’t expect to finish the year as strongly this time with a brutal finish against the Chiefs, Browns, Bucs, Patriots, Bills and Ravens. Things will be a little easier in the division if Browns QB Deshaun Watson misses significantly more than the 6 games he is currently set to, but the Ravens look formidable opponents.

Sometimes it can pay to swim against the tide and sell high, and that might just be the case with the Bengals, who had so many things falling into place for them last season that it will be hard to repeat. The team themselves should be full of confidence after raising their standing last season but overachievers one season can often have to pay for it the next year. The curse of the Super Bowl runner-up is not the burden it once was, but over the last 6 years, 3 of the beaten Super Bowl teams failed to make the playoffs the following year (Panthers, Rams, 49ers).

The Bengals could easily get 6 or 7 wins on the board before their Week 10 bye, but if they don’t a double-digit total could look a long way off given their alarming slate down the stretch. With the push condition at 10 with DraftKings (FanDuel has the line at 9.5), taking the under is marginally preferred.

The Bengals didn’t get to the Super Bowl by serenely sweeping through the regular season and it could get scrappy again. They have the tools to win on any given Sunday but there’s a target on their back now and something like a 9-8 record and another late scramble to make the playoffs would not be a huge surprise.