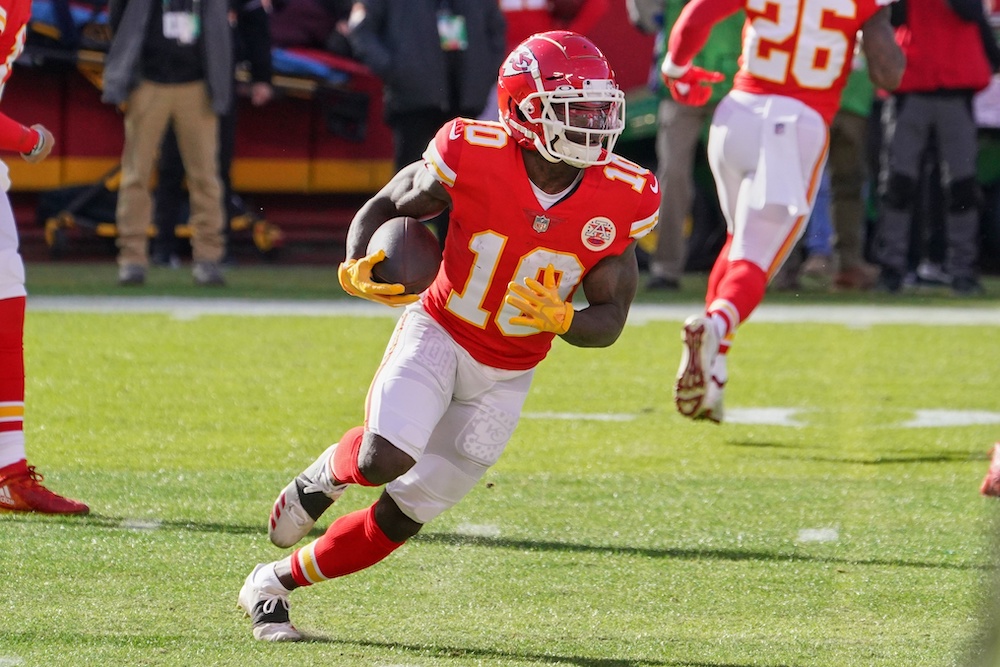 The Sunday Night Football matchup is quite the doozy for Week 2. The two-time reigning AFC champion Chiefs travel to Baltimore to take on the Ravens. This intra-conference clash of the titans is absolutely flush with superstars on both sides of the ball, making for some very intriguing player prop possibilities. Before I get to my pick of the game, make sure you check out our expert picks for the game sides and totals.

This game treats us to plenty of strength-on-strength individual matchups. However, with the Chiefs offense, there is one connection that is showing no signs of slowing down. I’m looking to ride the wave, with my favorite play of the game.

As far as quarterback-wide receiver connections go, you might not be able to find much better than the Chiefs combo of Hill and Patrick Mahomes. Last week, Hill casually caught 11 passes for 197 yards and a touchdown. And in the three playoff games last season, we saw Hill go bonkers with 24 receptions. The All-Pro duo is clicking, and there’s not much any team in the league can do about it.

It’s not always easy to find value on a bet for a superstar, since the public tends to gravitate towards the over. However there are two significant variables to this play that I believe sportsbooks are undervaluing.

No Watkins, no problem

Lining up opposite the Chiefs this week is their former receiver, Sammy Watkins. When the Clemson product defected in free agency, the Chiefs opted to replace him in-house. The oft-injured receiver had spent plenty of time on the bench as a member of the Chiefs, so there was not a pressing need to look elsewhere to replace his production.

Since the beginning of last season (and including the playoffs) Hill has seen a nice boost in his receiving totals without Watkins on the field. In eight games, Hill has averaged 7.6 receptions on 11 targets without Watkins, a 38 and 30 percent boost, respectively. The speedy receiver caught at least 7 balls in 5 of those 8 games. The Chiefs other passing game targets not named Travis Kelce continue to underwhelm. With one less mouth to feed, I expect Mahomes to continue to pepper Hill with plenty of targets.

As I highlighted in last Monday’s play, short, quick passes are a favorable way to attack the Ravens defense. Hill is likely to draw Marlon Humphrey in coverage, a very good player in his own right. However, last season Humphrey allowed the 20th most catches per coverage snap (out of 79 qualifying CBs). With the defensive back’s yardage totals skewing much better, I believe Hill will capitalize on the quick hitters.

The Chiefs don’t need an excuse to feed Hill all the targets he can handle, and it shows. Mahomes is implied by sportsbooks at a gaudy 41 pass attempts in this matchup.  The 11 targets I estimate Hill needs in this matchup, would only require a 27 percent target share, which is less than the 31 percent Hill has seen without Watkins. There is a good amount of cushion to this play, which is why it’s my favorite for the Sunday night showdown.